Boris Johnson will today pledge to get Britain ‘out of the rut’ of the last three years by delivering Brexit and triggering a green revolution, in his first major speech of the election campaign.

The Prime Minister will hammer home his central message that only a Conservative majority can ‘end the Brexit groundhoggery’.

But he will also paint a picture of a brighter future, saying that delivering Brexit will allow the country to ‘unleash Britain’s potential’. 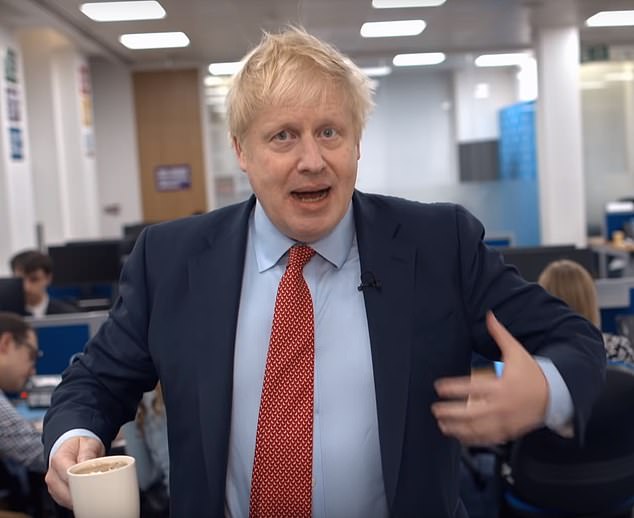 In addition, Mr Johnson will call for a ‘clean energy revolution’ after Britain has left the EU. Talking at an electric vehicle plant in the West Midlands, he is set to announce fresh plans for boosting take-up across the country.

However, with a month to go until polling day, Mr Johnson will focus his message on the key Brexit choice facing voters.

He will say: ‘The UK is admired and respected around the world but people are baffled by our debate on Brexit and they cannot understand how this great country can squander so much time and energy on this and how we can be so hesitant about our future.

Johnson surges in the polls after Farage backs off

Boris Johnson has surged to a 14 point poll lead over Jeremy Corbyn after Nigel Farage announced the Brexit Party will stand aside in seats won by the Tories in 2017.

Mr Farage tore up his election strategy yesterday as he said the Brexit Party will give the Tories a clear run in 317 constituencies on December 12.

That decision appears to have had a massive impact on the election campaign with the Tories now polling at 42 per cent while Labour is back on 28 per cent.

Mr Farage’s support dropped six points on last week, putting the Brexit Party on 4 per cent according to the poll taken on Monday and Tuesday this week.

The poll deliberately excluded the Brexit Party in the Tory-held seats where Mr Farage will not stand against Conservatives, explaining the drop in support.

Meanwhile, the Liberal Democrats are on 15 per cent. The YouGov poll for The Times suggests Mr Farage has significantly increased Mr Johnson’s chances of retaining the keys to 10 Downing Street.

It comes after a Survation poll, conducted before Mr Farage’s bombshell election announcement, suggested the Tories were six points ahead of Labour.

That survey put the Conservatives on 35 per cent and Labour on 29 per cent with the Lib Dems and Brexit Party both going backwards.

‘If we can get a working majority we can get Parliament working for you, we can get out of the rut. We can end the groundhoggery of Brexit…’ The term refers to the 1993 film Groundhog Day in which the same thing happens day after day.

Mr Johnson went on: ‘We face a historic choice. At this election the country can either move forwards with policies that will deliver years of growth and prosperity or it can disappear into an intellectual cul-de-sac of far-Left Corbynism.’

The PM will also warn of the risk posed by a potential Labour-SNP coalition, which would hold second referendums on Brexit and Scottish independence.

But it is his eco-ambitions that are likely to generate most interest. The Prime Minister will tell his audience a Conservative government would ‘harness the power of science, innovation and technology to tackle climate change, spur economic growth and create high-skilled, high-wage jobs’.

Other green pledges include investing £1bn in the UK’s electric car industry, and planting a million trees in Northumberland.

Last night Mr Johnson featured in a quirky political broadcast in which he answered questions on everything from walking his dog to his favourite band.

The five-minute video shows him walking through the Tory Party’s campaign base in London and making himself a cup of tea.

It looked set to become a social media hit, with supporters and opponents re-posting it with comments. Many focused on how he left his tea bag in the cup, leading Mr Johnson to respond this ‘lets it brew and makes it stronger’. He also said that The Clash or Rolling Stones are his top band.

As robots take over warehousing, workers pushed to adapt