Relatives of cafe owner Sisto Malaspina, who was killed in the 2018 Bourke Street terror attack, have joined injured bystander Rod Patterson and two others in taking legal action against Victoria Police, saying it was negligent and failed to prevent the act of terrorism. 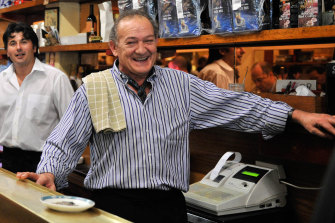 Documents filed in the Melbourne County Court allege police were close by during the attack and authorities knew of the “dangers which existed to members of the public” should Shire Ali carry out “his terrorist intentions and ideologies”.

The separate claims have been filed by lawyers representing David, Sisto’s son, and his wife Vwaja, Mr Patterson and his wife Maree, and close relative of Mr Helal, Saoussan Randrage.

The writs, all drafted in similar terms with similar allegations, say Victoria Police was responsible for anti-terrorism policing in the state and owed a duty of care to the victims and their families before the attack. 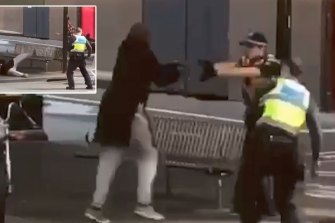 “[Victoria Police] knew of the nature and extent of the assailant in this matter,” the documents state.

Shire Ali had visited the CBD an hour before his attack, distributing pamphlets preaching Islamic faith on cafe tables at the Docklands end of Bourke Street.

He then drove to Richmond and various locations including Rod Laver Arena, the MCG and AAMI Stadium before returning to the city centre. 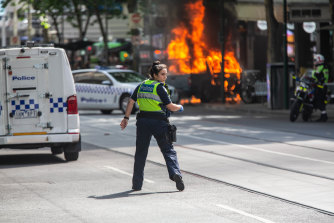 About 4.20pm, he drove down Bourke Street in a blue Rodeo ute filled with gas cylinders he had bought at Bunnings and parked between Swanston and Russell streets, before setting the ute alight.

As he attempted to get out, he grabbed a knife and in the space of 19 seconds stabbed Mr Malaspina to death while seriously injuring two others who ran to Shire Ali’s aid, fearing he was an innocent victim of a car fire.

Shire Ali then ran at two uniformed officers before he was subsequently shot. He died during surgery in hospital from a gunshot wound to the chest.

Numerous witnesses said Shire Ali was yelling “Allah” and “Allahu Akbar” as he lunged at police and pedestrians.

In June, State Coroner John Cain found the fatal knife attack was a premeditated act of terror and called for major changes to the sharing of information between crime and intelligence agencies.

Mr Cain found there were missed opportunities in the lead-up to the attack, including intelligence gaps, incomplete tasks and delays in referring Shire Ali for assessment for a deradicalisation program.

Victoria Police did not provide comment when asked. It said it had not yet been served the court documents

Lawyers from Slater and Gordon are representing all the plaintiffs. The firm’s public liability practice group leader Ike Nwokolo said: “My clients have sustained terrible, life-changing physical and psychological injuries as a result of the 2018 Bourke Street attack.

“At this stage, we are seeking to preserve our clients’ rights while we investigate the full nature and extent of the state’s negligence in the operation of the Victoria Police anti-terrorism unit that resulted in injuries to our clients and others.”

It is normal for people to have strong emotional or physical reactions following a distressing or frightening event. People can seek help and advice by visiting their local doctor or calling Lifeline 13 11 14, GriefLine 1300 845 745, or beyondblue 1300 224 636.

Girl, 15, whose son was born after Asian grooming gang 'rape' had child taken away by secret court but 'ATTACKER' will be involved in upbringing

And Just Like That! Bridget Moynahan Confirms ‘SATC’ Revival Return