Home » Boy, 15, admits to string of sex and knife attacks on schoolgirls

Teenage boy, 15, admits to string of sex and knife attacks on six schoolgirls he targeted at ‘random’ on south London streets as they walked to classes

A 15-year-old schoolboy assaulted six girls as they walked to school in south London.

The teenager stabbed a 15-year-old girl in the leg while she was walking in the morning in Croydon on November 4.

Then, just two days later, another 15-year-old girl was stabbed by a stranger – this time in the arm.

Both girls were taken to hospital and their conditions were deemed not life threatening, police confirmed.

Officers launched an investigation into the attacks on the girls, who went to separate schools and are not believed to have know each other.

The boy – who cannot be named because of his age – was then linked to four other attacks on girls from November 2019 to October 2020. 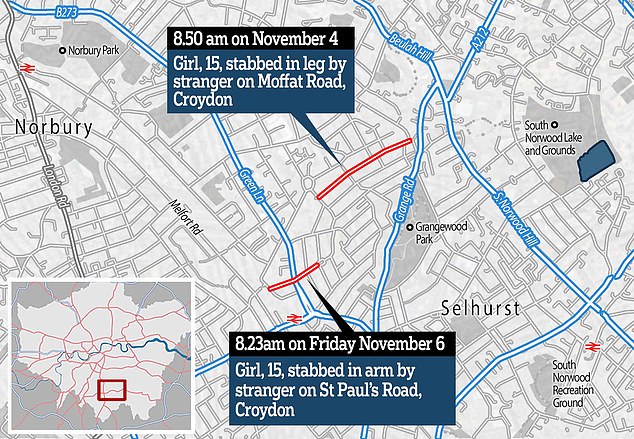 A 15-year-old schoolboy assaulted six girls as they walked to school in south London (a map showing two of the assaults, pictured)

All victims were approached as they were walking to school and sexually assaulted or assaulted.

He also pleaded guilty to four counts of sexual assault, one count of assault by penetration, and one charge of common assault. A charge of robbery was left to lie on file.

He was remanded in custody for sentencing on June 7.

Police were first called shortly before 9am on November 4 to reports of a girl stabbed in Croydon.

A 15-year-old was approached by a stranger and stabbed in the leg.

The victim was taken to hospital where her condition was confirmed as not life threatening.

Then, on November 6, police were called to a girl stabbed in the arm after being approached by a stranger.

London Ambulance Service also attended and she wa treated at the scene before being taken to hospital. Her condition was also deemed non-life threatening.

Officers from the South Area Command Unit launched an investigation. 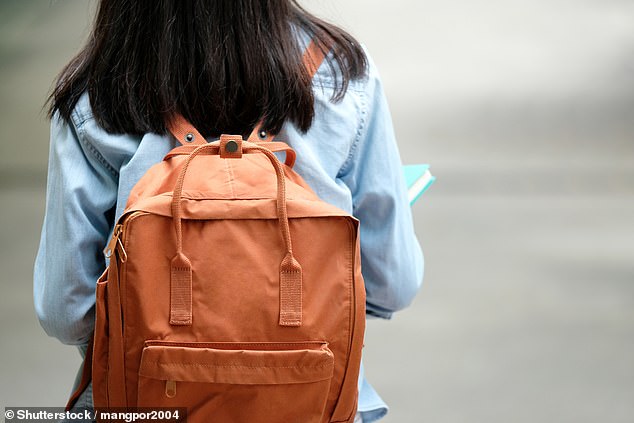 The offences were linked to four other incidents from November 2019 to October 2020 where teenage girls were approached as they were walking to school and sexually assaulted or assaulted.

The boy was arrested at his residential address in Thornton Heath in the early hours of Sunday, November 8.

Detective Sergeant Sarah Barrett who led the investigation said: ‘These incidents caused considerable concern to the local community – all the victims were teenage girls, and apparently chosen at random.

‘They were making their way to school when they were subjected to needless and completely unprovoked attacks.

‘I am grateful to all of them for their assistance to our investigation.’

Schools ARE safe as just 1.2% of pupils test positive for Covid with face masks driving cases down