A teenage member of a rapper’s entourage who murdered one man and seriously injured three others in a knife rampage outside a nightclub has been locked up for life today.

Vasilios Ofogeli, 17, was told by High Court Judge Mrs Justice Cutts he must serve 20 years behind bars before he can apply for parole.

He was just 16 when he fatally stabbed university student Andre Bent – the cousin of S Club 7 star Bradley McIntosh – outside Gallery in Maidstone, Kent during the early hours of August 25 last year.

Mr Bent, 21, suffered a 21cm-deep chest wound and died at the scene. It later emerged his girlfriend had been due to tell him that day that she was expecting his child.

Ofogeli knifed all four of his victims in the space of 73 seconds during what was described as ‘a spontaneous outbreak of violence’. 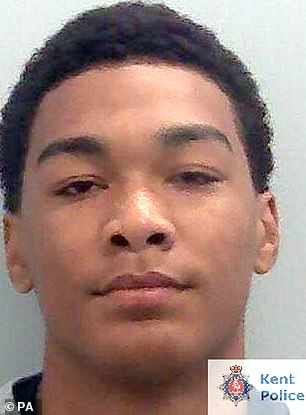 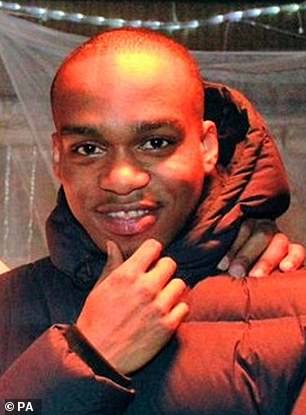 Ofogeli (left) stabbed Andre Bent (right) in Maidstone, Kent, during a rampage in which he also attacked three other people

He was subsequently convicted of murder, two offences of attempted murder, one of wounding with intent, and one of violent disorder, following a three-week trial at Maidstone Crown Court earlier this year.

Ofogeli, who smirked when the jury returned their verdicts after deliberating for just under 12 hours, was sentenced at London’s Old Bailey today.

Mr Bent, who was a second-year business studies student from Lambeth, south London, had been at the nightclub where grime artist MoStack – real name Montell Daley – was performing.

Despite his young age, Ofogeli was part of the official entourage in the VIP lounge and had joined his friend on stage just an hour before the murderous attack. 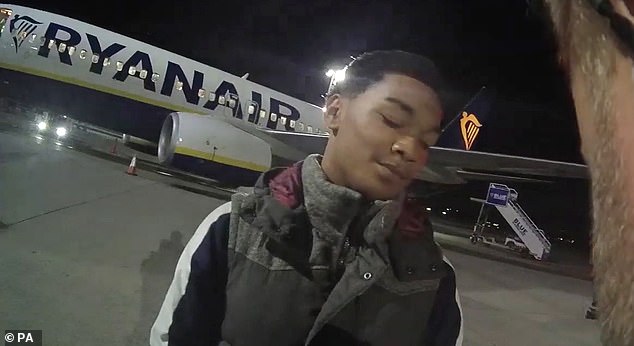 Shocking footage of him running amok in Jubilee Square with the large hunting knife, also described by witnesses as a machete, was posted on social media.

Ofogeli fled to his home in Hornsey, north London, before a flight to Greece. But he was arrested on the Tarmac at Stansted Airport when he returned six days later.

Despite stabbing the men as they were either running away or laying on the ground, he claimed at his trial that he had acted in self-defence.

Prosecutor Philip Bennetts QC told the court the ‘catalyst for violence’ was a fight between two of MoStack’s entourage as they left the club.

Others joined in by punching, kicking, and striking with belts. Another of the rapper’s friends was stabbed in the melee and two knives, not including the one used to stab Mr Bent, were later found at the scene.

Ofogeli armed himself with a 23cm-long blade from a car parked outside the club and then tried to disguise himself by wrapping his hooded top around his head.

His first victim, Lucas Baker, was stabbed to his shoulder, the knife penetrating all the way through his body.

Thirteen seconds later Patrick Conceicao was knifed twice to his back with the force causing two spine fractures and a punctured lung.

The third man, Joshua Robinson, was knifed to his left buttock and right thigh as he lay on the ground.

Mr Bent was the fourth and final victim, stabbed to the side of his chest just seven seconds after Mr Robinson.

He collapsed unconscious almost immediately and died despite efforts of first-aiders and paramedics at the scene.

Ofogeli, himself a budding rapper known as Scarz8th whose sinister lyrics and music videos promote drugs, gangs and violence, fled to Athens later that day.

The weapon, which had two cutting edges – one smooth and one serrated – was found in its sheath in a back garden near his home.

The mayhem of people being stabbed while others screamed and fled in terror was captured on CCTV, body cameras worn by street safety volunteers, and mobile phones.

At one stage 25-year-old MoStack could be seen trying to restrain Ofogeli and telling him to leave.

One eye witness described the violence as ‘a Royal Rumble’ in which he saw the teen wielding a ‘big, butcher’s knife’. Another said Ofogeli was aggressive and ‘looking for a fight’.

The naming of Ofogeli, who has no previous convictions, had been banned throughout legal proceedings due to his age but restrictions were lifted by Mrs Justice Cutts on conviction and in response to a media request.

Nine other men – said to all be ‘fans, friends and supporters’ of MoStack and also from London – have since been jailed for violent disorder, with sentences ranging from 20 to 26 months’ imprisonment.

A tenth man, a friend of Mr Bent’s who cannot be named for legal reasons, awaits sentence after pleading guilty on Tuesday to an offence of wounding with intent in relation to stabbing one of MoStack’s entourage that night.

Mr Bent’s girlfriend, Maria, 22, had been due to give birth to their daughter on April 25 – exactly six months after his death.

Singer Bradley McIntosh paid tribute to his cousin during a festival performance that same August Bank Holiday weekend, asking the crowd to hold a minute’s silence.

Speaking at the end of the trial in March, Michael Bent, 49, spoke of the ‘protective and loving father’ his son would have been.

‘My son was loved very much, he was an amazing child. He had the best intentions for everybody and we have always taught him to love family, to love people, and this narcissist took his life.

‘Andre grew up as family-orientated. He would have been very protective, and the child is going to be well-loved,’ he added. ‘Andre will be proud. We will look after Andre’s child.’

Both his girlfriend and his mother Monika (CORR), 55, were said by the family to be traumatised and struggling to cope with their loss.

‘The hardest part of all has been watching our sister literally fall apart. It has totally destroyed her,’ said her brother and Andre’s uncle, 62-year-old Stephen McIntosh.

‘But we can rebuild now. Andre will live on in his child and we can give that child everything Andre would have given her. This is something that has literally destroyed our family.

‘We are very close, a very large family. We have watched our children grow together and Andre was one of them.

‘He was one of the happiest people you would ever want to know. An amazing young boy, a joker.

‘On that night he went out with some friends for a simple birthday party. His bags were packed to go to university the following Monday. But he never came back.

‘His girlfriend had a message for him. She was pregnant. He never knew. He was going to be told that morning.

‘He was excelling, he was saving money with Maria and aspiring to do things together – only for him to be dragged away in such a heinous way. We are heartbroken.’

Detective Chief Inspector Patrick Milford of the Kent and Essex Serious Crime Directorate said: ‘Andre Bent was a popular and much-loved young man with his whole life ahead of him, but his future was cut short by Vasilios Ofogeli in the worst way imaginable.

‘Ofogeli and his friends had travelled to Maidstone from their home in London and brought with them a level of violence that we simply do not tolerate here in Kent. There is no excuse for anyone to go out while armed with a knife or to cause such serious harm to others, and we relentlessly pursue those who do to ensure they are brought to justice.

‘This was a fast-paced investigation that demonstrates our commitment to ensuring justice for Andre’s family most importantly, but also for the people of Maidstone who were shocked and appalled by what happened that night. Thankfully such incidents are rare and our officers work hard on a daily basis to ensure it stays that way.

‘The callous and random nature of the knife attacks committed by Ofogeli on Andre and three other men are deeply troubling and paint a picture of a young man who thinks nothing of attacking others with a deadly weapon. He is fully deserving of the lengthy prison sentence he will now have to serve.’

Are Nick Jonas and Priyanka Chopra on a Honeymoon? Here's How They're Spending Their First Days As a Married Couple

Your Virgo Monthly Horoscope for October