Brazil’s president renewed his attacks on journalist Glenn Greenwald on Saturday, raising the possibility of jail.

The president’s threats come a few days after members of his party said the American’s Brazil-based internet publication was ‘aligned with criminal hackers’ for reporting the contents of hacked phone conversations involving the current justice minister.

Reports in the The Intercept Brazil, run by U.S. Glenn Greenwald, have led to questions about whether Justice Minister Sergio Moro improperly consulted with prosecutors when he was a judge overseeing the mammoth ‘Operation Car Wash’ corruption investigation.

Moro, whose work in that probe has made him a hero for many Brazilians, is a key member of President Jair Bolsonaro’s Cabinet. 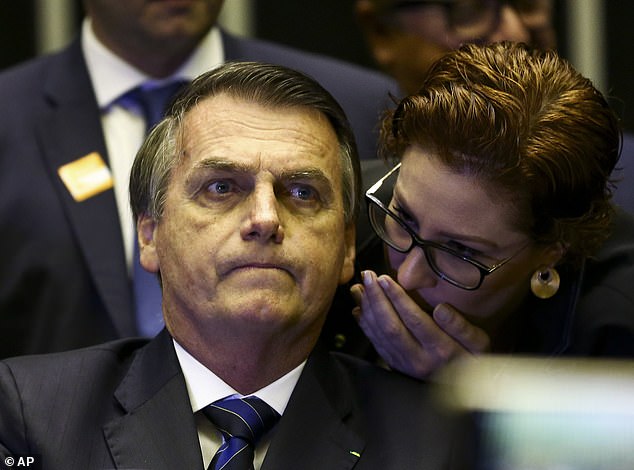 Brazil’s President Jair Bolsonaro listens as Carla Zambelli whispers into his ear during a meeting at Congress, in Brasilia, Brazil

Bolsonaro has sharply criticized Greenwald for the reports, and local media said he was asked at a military ceremony Saturday whether the journalist might be kicked out of Brazil under new rules announced a day earlier allowing a fast-track deportation of foreigners deemed ‘dangerous’ or who are found to have violated the constitution.

The president responded that Greenwald is covered by the regulations because he is a resident of Brazil who is married to a Brazilian, legislator David Miranda, and they have adopted children together. But Bolsonaro added: ‘Maybe he will be imprisoned here in Brazil.’ 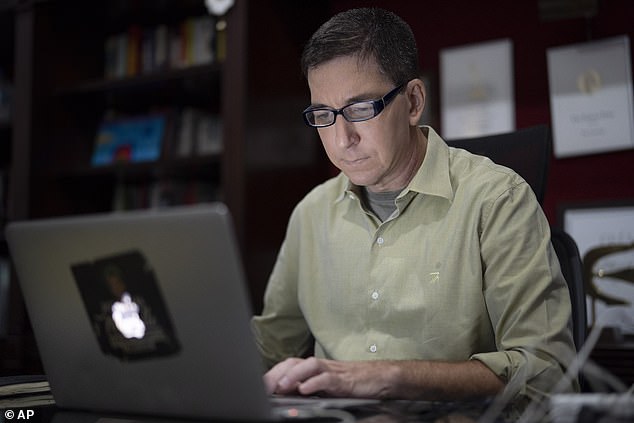 ‘Contrary to what the president says, he is not (yet) a dictator,’ Greenwald wrote. ‘He doesn’t have the power to order people to stop. To detain someone, you need to present evidence to a court showing that a crime was committed. That evidence does not exist.’

The Brazilian Association of Investigative Journalism condemned the president’s comment about jail.

‘By threatening a journalist who publishes information that he dislikes, the president promotes and instigates serious attacks on freedom of expression. Without free journalism, the other freedoms will also die,’ the group said.