In an explosive letter, a health union has demanded the sacking of Victorian Health Minister Jenny Mikakos – who is due to front the hotel quarantine inquiry today – saying locked-down Victorians are paying the price for her incompetence.

Secretary of the Health Workers Union Diana Asmar has written to Premier Daniel Andrews calling on him to oust Ms Mikakos for "breathtaking incompetence" in a letter now being circulated publicly.

The letter was prompted by a meeting between Ms Mikakos and the union on Monday over plans for a Public Private Partnership with rebuilding plans for Frankston Hospital.

"Leaving aside the issue of privatising non-clinical public health jobs in the middle of a pandemic and a failure to consult … Ms Mikakos failed to answer simple questions," the letter reads.

"She had no understanding of the difference between clinical roles and non-clinical roles within a hospital, nor could she comprehend the details of the PPP proposal.

"She instead referred to scripted notes 'thanking frontline hero health workers for their had work'."

Ms Asmar said her union's relationship with the Andrews government was "officially dead".

"Since your government's re-election in 2018, we have seen repeated mismanagement of the Victorian health system by Minister Mikakos. All Victorians are seemingly paying the price for her incompetence," the letter reads.

The letter lists a number of what Ms Asmar sees as the health minister's failings, including accusations that the Minister's office was "utterly dysfunctional" and failed to consult the union before major announcements during the pandemic.

Ms Asmar predicts and continuation of infections in aged care facilities due to inadequate PPE supplies and protocols, a situation which she solely blames Ms Mikakos and her portfolio for. 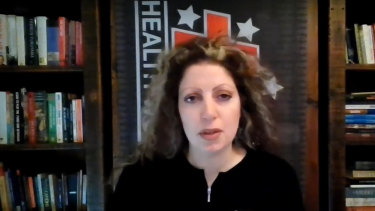 Diana Asmar before the Royal Commission into Aged Care.

"We are currently in September, and as long as Minister Mikakos and DHHS insist on the existing tiered guidelines to PPE in aged care, it is our view that Victoria will not achieve its infection targets to warrant a return to even Stage 2 lockdowns. Many more deaths in Victorian aged care homes will ensue," she writes.

The letter ends with a cutting of ties between the union and the Labor government.

"In short, Ms Mikakos through her incompetence has turned the HWU, a once supportive stakeholder of your government into an actively hostile one," it reads.

The Australian Nursing and Midwifery Federation have been contacted for comment, while the Australian Council of Trade Unions (ACTU) said it would not be commenting on the letter or Victorian matters.