Cheyenne and Lucas Kopeschka were filming a segment for their wedding video in Fredonia, New York, on June 30 when the falling bark came crashing towards them. 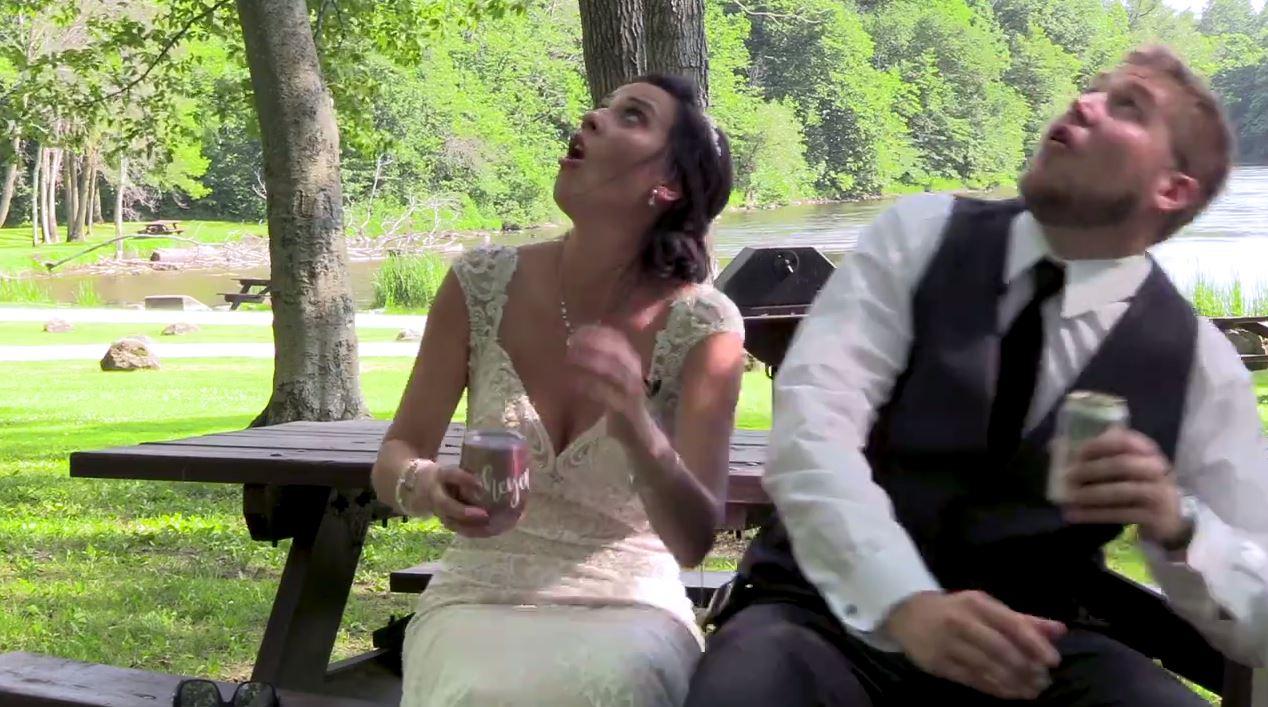 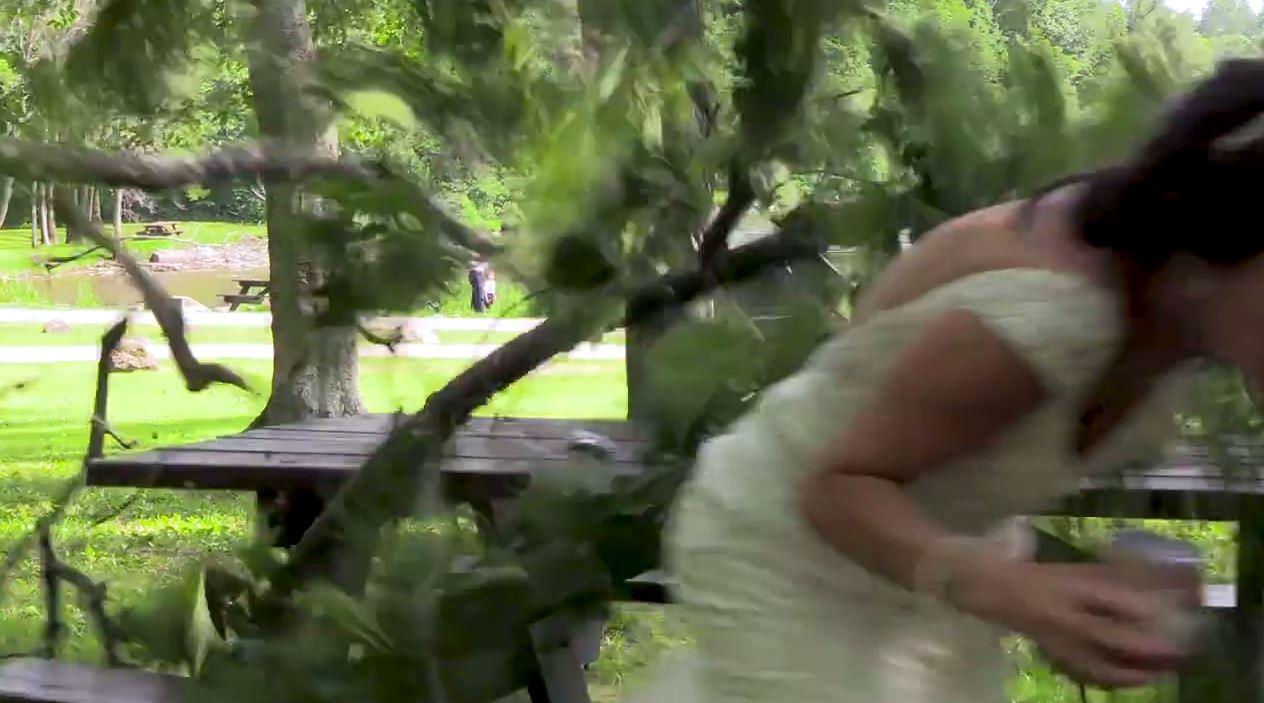 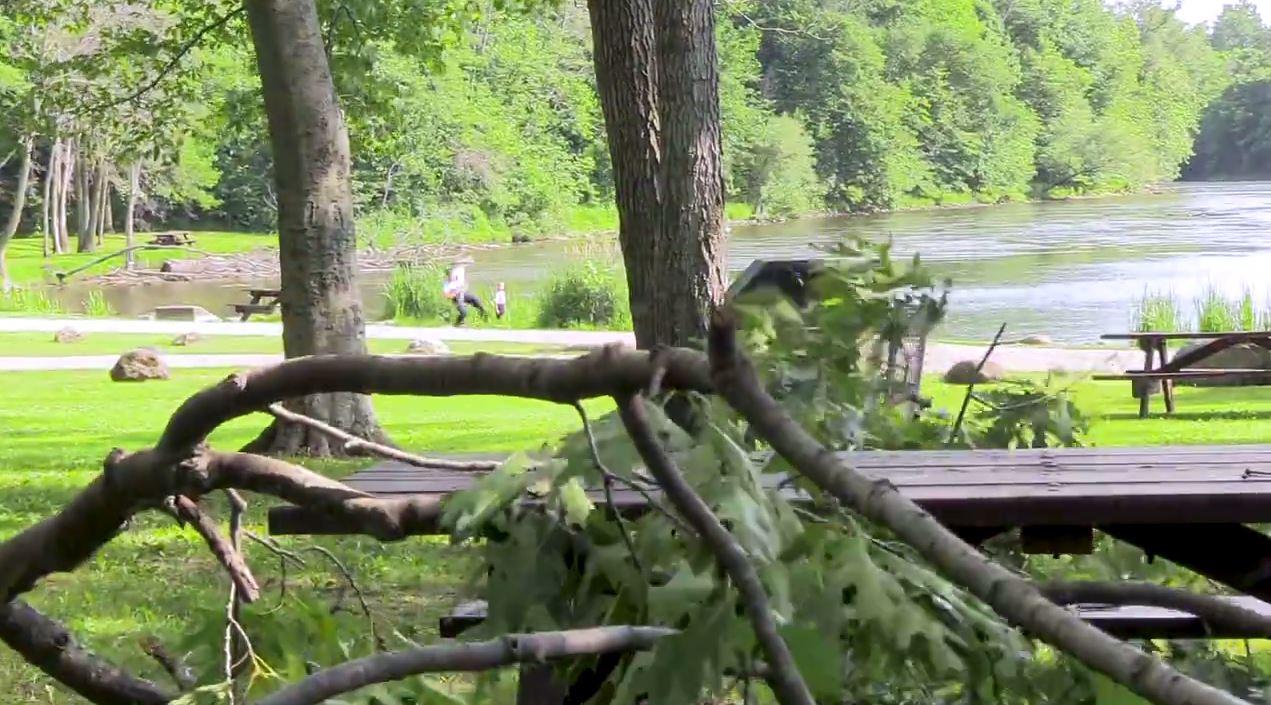 In the dramatic clip, shot by Freddy Hernandez Photography & Media, the newlyweds discuss how they fell for each other before their lucky escape.

But just as Lucas starts talking, the couple hear branches breaking before looking up in horror at the falling tree.

As they both move quickly out of the way, the heavy bark crashes into the picnic table where they were sitting with a thunderous bang. 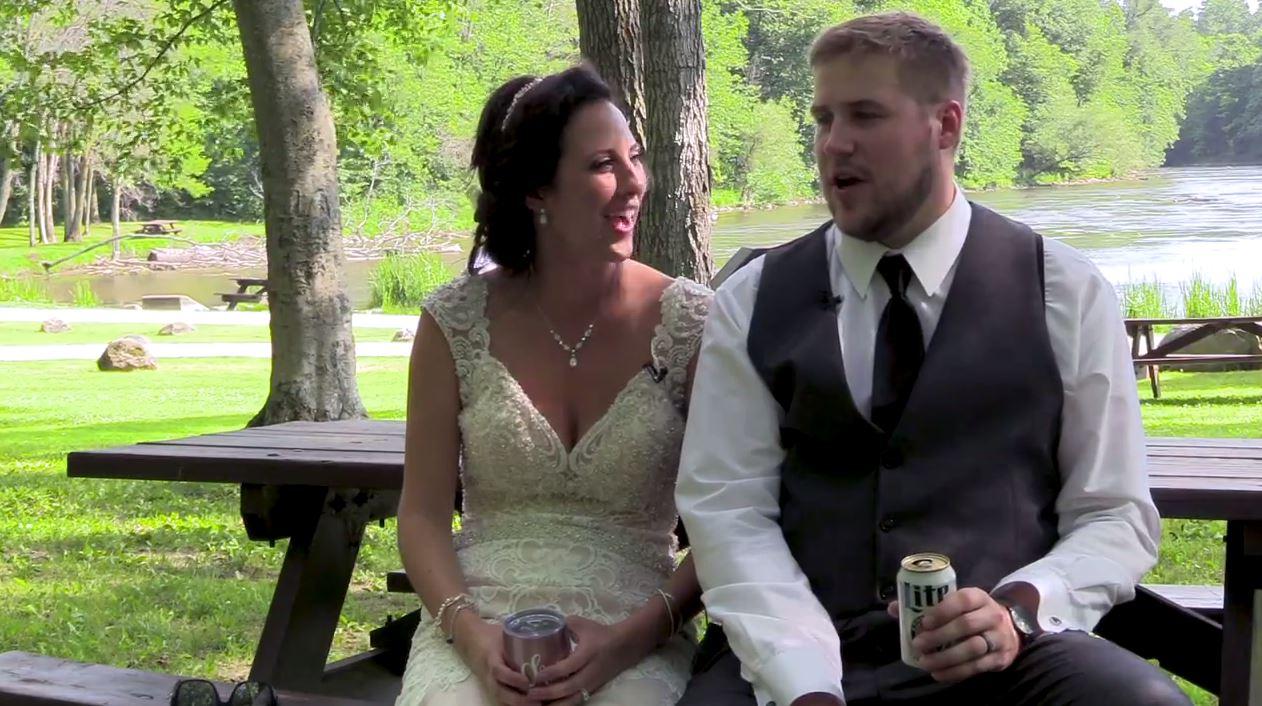 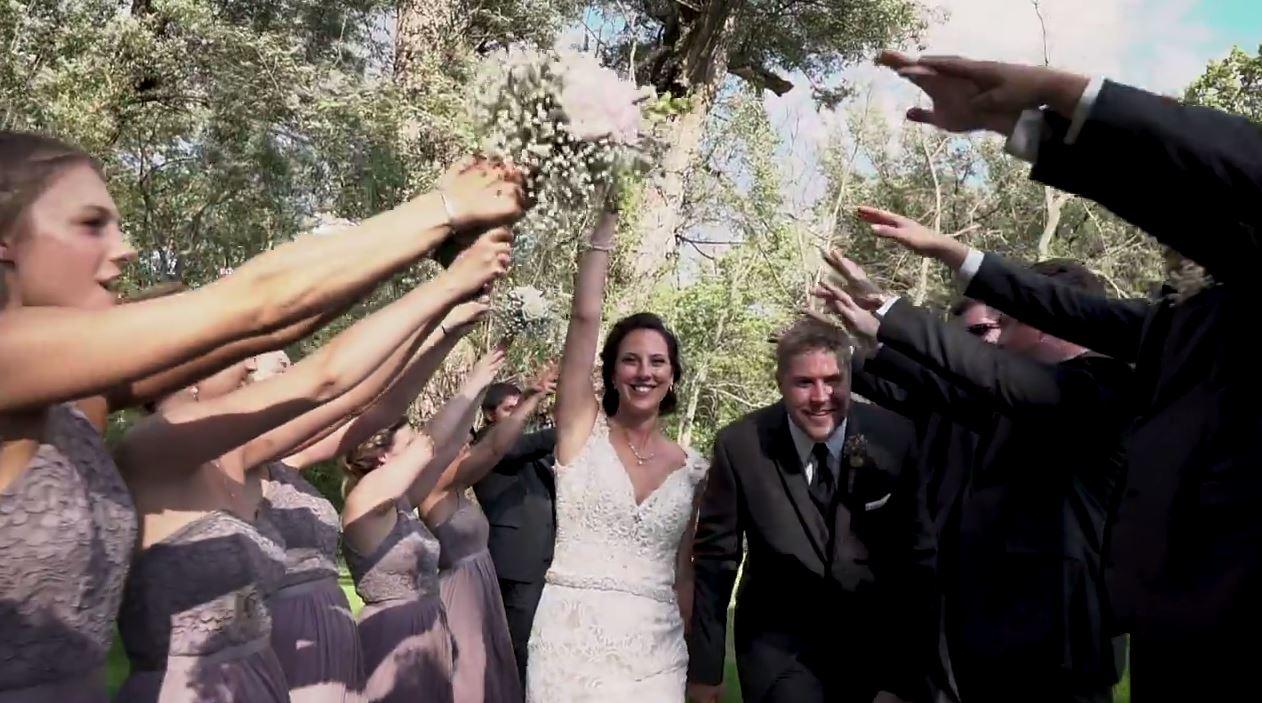 The rest of the couple's video shows them celebrating their nuptials in an outdoor setting surrounded by  a small group of friends and family.

Meanwhile, another newlywed couple whose wedding snaps were ruined by a sunbather say they are "deeply upset" after being slammed for asking the woman to move.

Mark Ling, 49, and Mandy Cripwell, 35, wed on Saturday before popping to a renowned Devon beauty spot to take snaps. 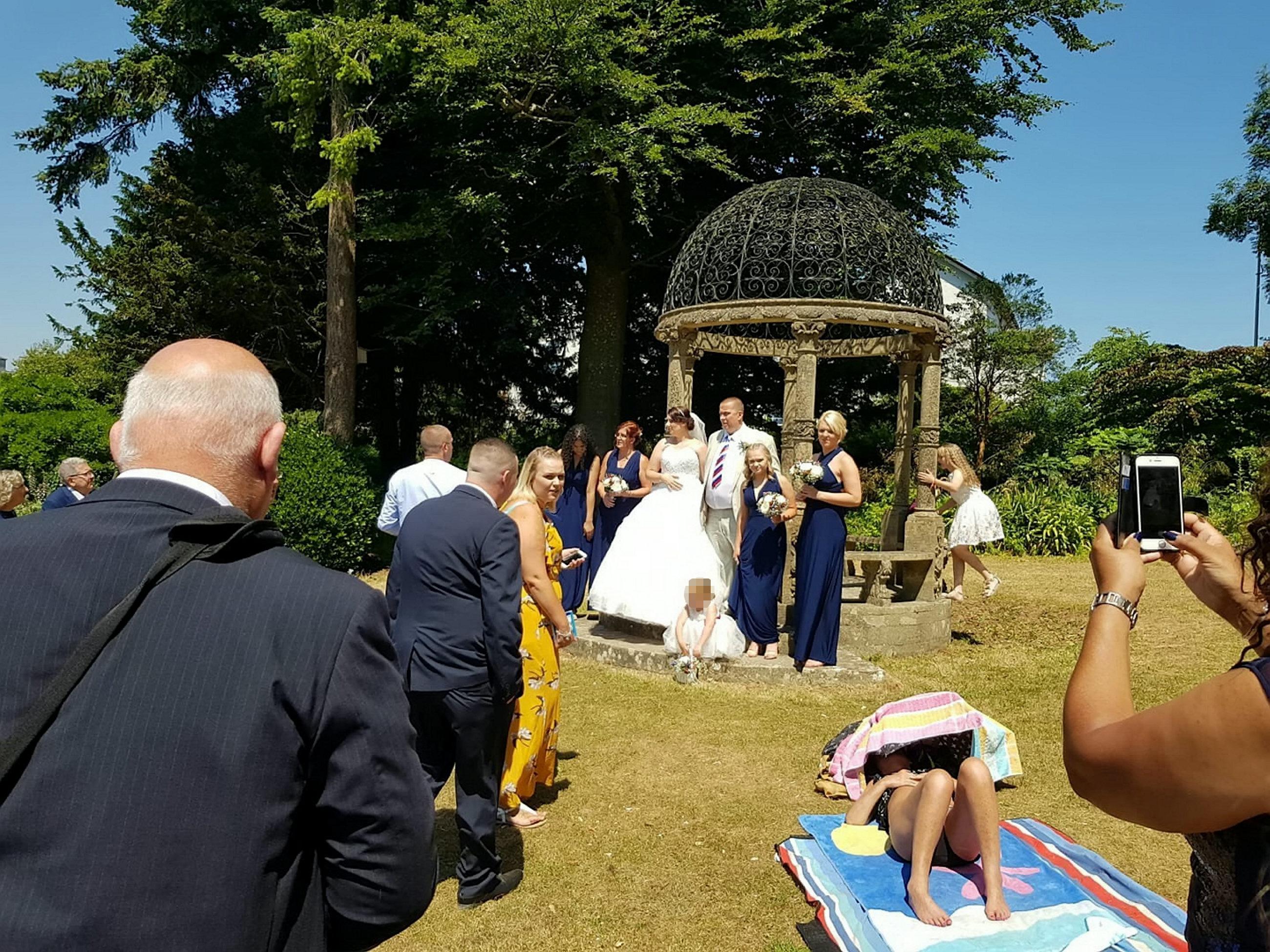 However they claim their idyllic sun-kissed scene was ruined by a sunbather who was lying down on the grass.

The couple, from Torquay, say they asked the woman to move but she refused.

This left the wedding party forced to pose for pictures around her.

After a while Mark's son approached the woman and asked her to move – but he claims she pretended to be asleep.

The incident at Tessier Gardens, next to Furrough Cross Church in Torquay was captured on camera by another of Mark's relatives Natalie Ling, 28.

Natalie, who travelled from South London to attend the wedding, said she couldn't believe it.

She said: "We all spotted her there and thought she would move, but she just didn't. I thought 'how rude."

We pay for your stories! Do you have a story for The Sun Online news team? Email us at [email protected] or call 0207 782 4368 . We pay for videos too. Click here to upload yours

Colton Underwood Double-Shades Kelly Ripa for Her ‘The Bachelor’ Diss

Patient, 52, has HIV test after spending 24 hours in hospital bed that was dripping with stranger's blood