Britain has announced a further 164 coronavirus deaths, taking the total to 36,839, ahead of the official figure later today.

Scotland revealed a further nine, Wales seven and Northern Ireland just one, which include deaths across all settings.

Despite the promising number, Government’s scientific advisers on Friday said the R number is still between 0.7 and 1 across the UK – above 1 will cause the coronavirus to spiral out of control. 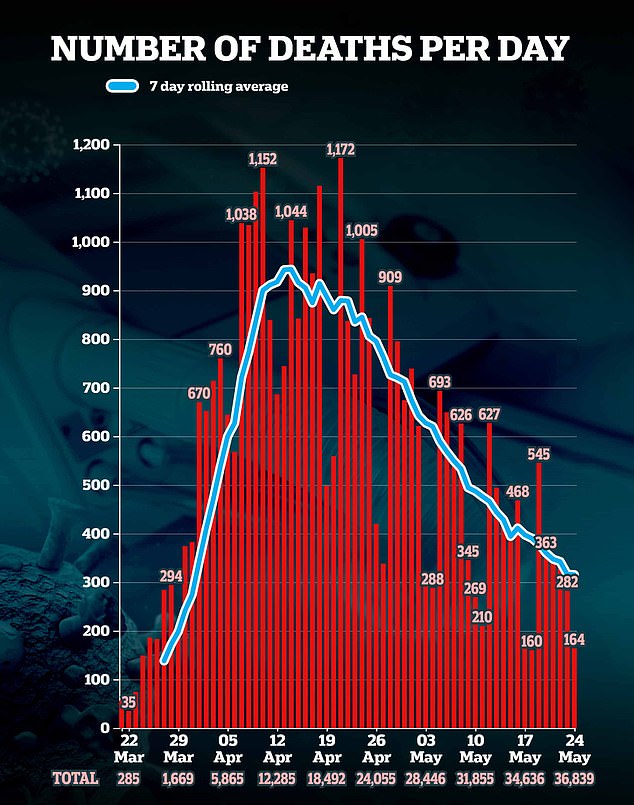 It comes as speculation Boris Johnson’s top aide Dominic Cummings is about to quit were fuelled when he was spotted in Downing Street this afternoon.

He arrived in Westminster this lunchtime as the first cracks in Tory unity appeared over revelations he twice travelled 270 miles from London to Durham while the public were told to stay at home for lockdown.

The Prime Minister has mounted a determined defence of his controversial lieutenant, telling allies: ‘It’s not like he was visiting a lover.’

And senior ministers have rallied around the Machiavellian figure, insisting he acted as a concerned parent and broke no rules, despite allegedly leaving home for day trips on one of the visits, meaning he made three breaches.

But just as the Prime Minister resolved to stand by his right-hand-man, the Downing Street adviser was rocked by fresh claims of flouting the strict national guidelines from two more witnesses, which whipped up a further frenzy for him to be sacked.

Steve Baker, a former Brexit minister and a senior hardline Brexiteer like Mr Cummings, broke cover to demand the Prime Minister ‘take back control’ of events squirming from his grasp.

Mr Baker told Sky News that Mr Cummings’ career had always ‘created an awful lot of collateral damage’, including the Brexit campaign, adding: ‘He is not always right and he certainly isn’t indispensable’.

‘If he doesn’t resign, we’ll just keep burning through Boris’s political capital at a rate we can ill afford in the midst of this crisis,’ he said.

‘It is very clear that Dominic travelled when everybody else understood Dominic’s slogans to mean ”stay at home, protect the NHS and save lives”.

‘And I think mums and dads who very much care about their children and who have been forgoing the childcare of their extended family will wonder why he has been allowed to do this.

‘I really just don’t see, as we approach the Prime Minister (appearing) at the liaison committee on Wednesday, how this is going to go away unless Dominic goes.’

In other developments today: 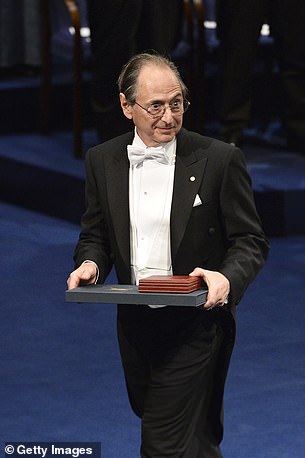 Michael Levitt, a Stanford University professor who correctly predicted the initial scale of the pandemic, suggested the decision to keep people indoors was motivated by ‘panic’ rather than the best science

Today a Nobel laureate scientist claimed the coronavirus lockdown could have caused more deaths than it saved.

Michael Levitt, a Stanford University professor who correctly predicted the initial scale of the pandemic, suggested the decision to keep people indoors was motivated by ‘panic’ rather than the best science.

Professor Levitt also said the modelling that caused the government to bring in the lockdown – carried out by Professor Neil Ferguson – over-estimated the death toll by ’10 or 12 times’.

He told The Telegraph: ‘I think lockdown saved no lives. I think it may have cost lives. It will have saved a few road accident lives, things like that, but social damage – domestic abuse, divorces, alcoholism – has been extreme.

‘And then you have those who were not treated for other conditions.’

His claims echo those in a JP Morgan report that said lockdowns failed to alter the course of the pandemic but have instead ‘destroyed millions of livelihoods’.

Author Marko Kolanovic, a trained physicist and a strategist for JP Morgan, said governments had been spooked by ‘flawed scientific papers’ into imposing lockdowns which were ‘inefficient or late’ and had little effect.

He said falling infection rates since lockdowns were lifted suggest that the virus ‘likely has its own dynamics’ which are ‘unrelated to often inconsistent lockdown measures’.

‘Excess deaths’ which were not caused by the coronavirus – but other problems such as lack of healthcare – have risen during the pandemic.

Today an analysis showed that London’s excess deaths have almost doubled from March 6 to May 8.

The figures from the Office for National Statistics, looked at by The Sunday Telegraph, show three regions which have recorded excess death more than 50 per cent higher since the start of March. 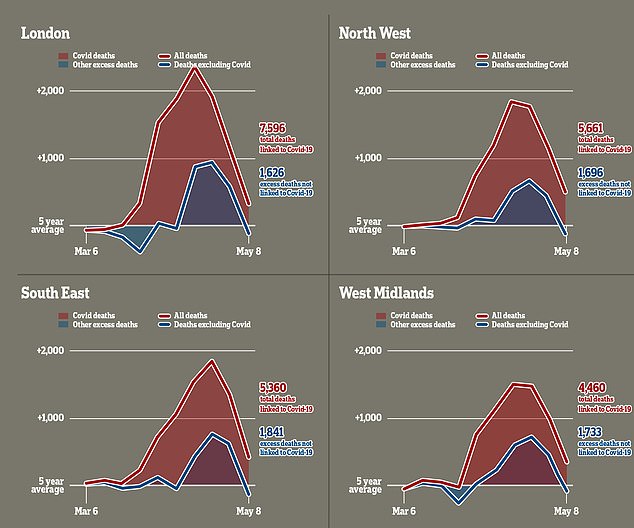 Figures from the Office for National Statistics, looked at by The Sunday Telegraph, show three regions which have recorded excess death more than 50 per cent higher since the start of March – London, the North West, and the West Midlands. Excess deaths include any that wouldn’t have been expected, including those directly and indirectly caused by the pandemic

London has been the hardest hit with more than 9,000 excess deaths from March 6 to May 8 – a 92 per cent rise from what would otherwise be expected.

The North West is closest behind, with almost 7,360 excess deaths between March and now, 52 per cent higher than what would be expected. Almost 1,700 of the excess deaths were not related to COVID-19.

The West Midlands has had 6,193 excess deaths, which is 58 per cent higher than what would be expected for that time of year. Some 1,730 are unexplained and not caused by COVID-19.

The excess death toll captures deaths that may have resulted from a lack of access to healthcare, as doctors have warned the public are avoiding A&E in order to protect the NHS.

Conditions like stroke and heart attack need immediate medical treatment, but there are indications people are delaying presentation at hospitals.

It also includes suicides, which are feared to rise as a knock-on effect of people’s mental health worsening during the lockdown, or moving forward due to financial worries.

Boris Johnson is keen to ease out of lockdown so that life can return to some form of normality, with market stalls, garden parties and car dealerships among the next wave of activities set to be given the green light.

A selection of open-air businesses and events are planned to be opened up from next month, with a return for National Trust parks also on the agenda, providing indoor attractions remain shut.

The proposals are set to be revealed when the Prime Minister hosts the Downing Street press conference on Thursday, after meeting with ministers at a cabinet meeting earlier in the week on Tuesday.

Despite those concerns some non-essential shops could be given the go-ahead to reopen as well, according to The Sun, as the Prime Minister tries to salvage something for families to enjoy this summer. 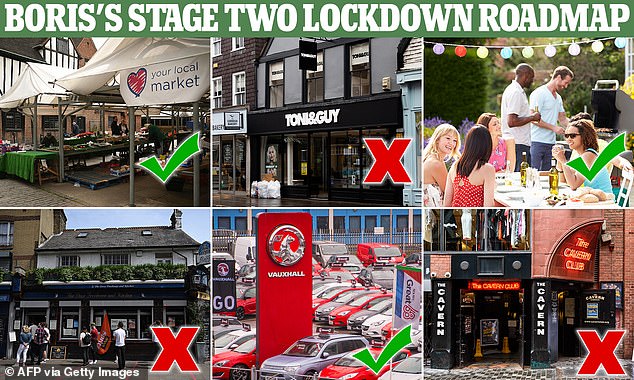 From June 1 it is expected that car dealerships, local markets and garden parties will be permitted. But you will still be unable to go to the hairdresser, the pub or a nightclub

A senior Government source told the paper: ‘It is clear from the scientific evidence that the rate of infection is much less likely outdoors. The combination of fresh air and sunshine are bad for the virus but they make it safer for everyone.

‘So we are looking at opening up the outdoors. But all done in slow steps.

‘Social distancing must continue and if there’s the slightest hint of the infection rate rising again, or people hanging around in large groups, the PM will call a halt.’