Make the most of the sun if it’s out! Britain faces a wet and windy start to the week as heavy showers sweep in from the west and 19 flood alerts issued with more snow on the way for Scotland

Britons lucky enough to be seeing sunshine this morning will have to make the most of it before a washout over the next few days with 19 flood alerts in place and Scotland due to see yet more snow.

And temperatures are expected to plunge to near-freezing at just 1C in the south west of the country.

Forecasters also warned of wet and windy conditions across other parts of England and Wales with parts of the country set for ‘very unsettled weather’.

Heavy rain is expected in northern England for the rest of the day and a sunny start to the south of the country will also turn to cloud and rain.

Almost the entire country will see cloud and rain overnight with a risk of fog in the east.

Met Office meteorologist Jonathan Vautrey said: ‘There are no official ice warnings out at the moment that we have issued but we are sending out a message in general that there is an isolated risk that any wet surfaces along with these showers could lead to icy stretches.

‘This is mainly due to the showers that will be feeding in from the west.’ 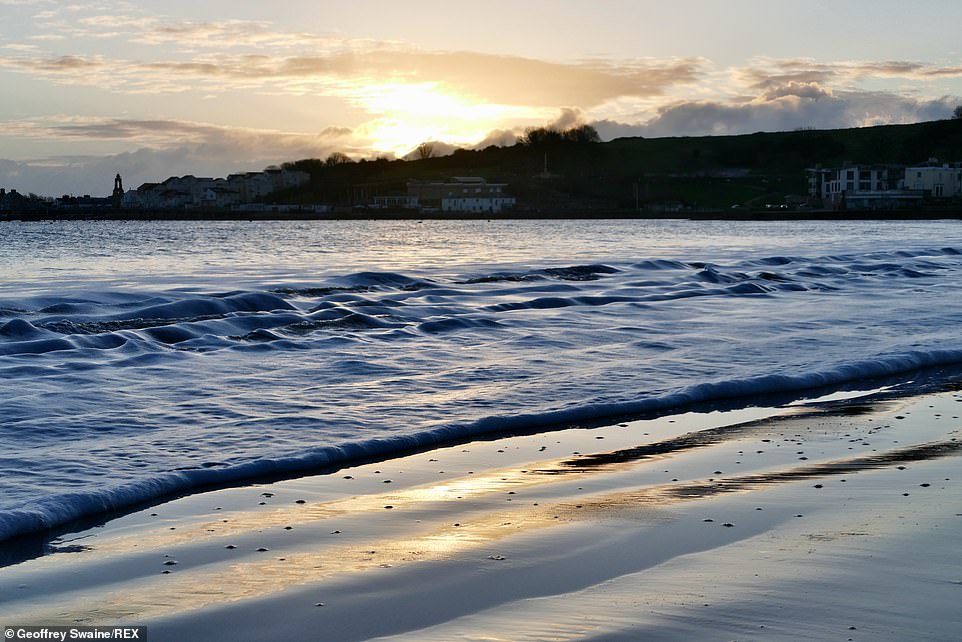 Heavy rain is expected in northern England for the rest of the day and a sunny start to the south of the country will also turn to cloud and rain. Pictured: A calm sunrise at Swanage Beach in Dorset on Sunday morning 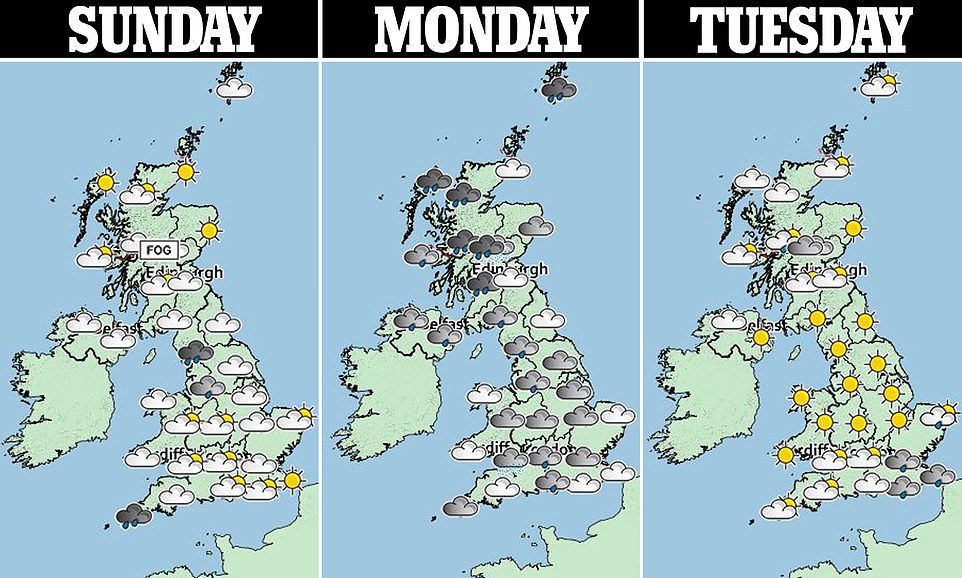 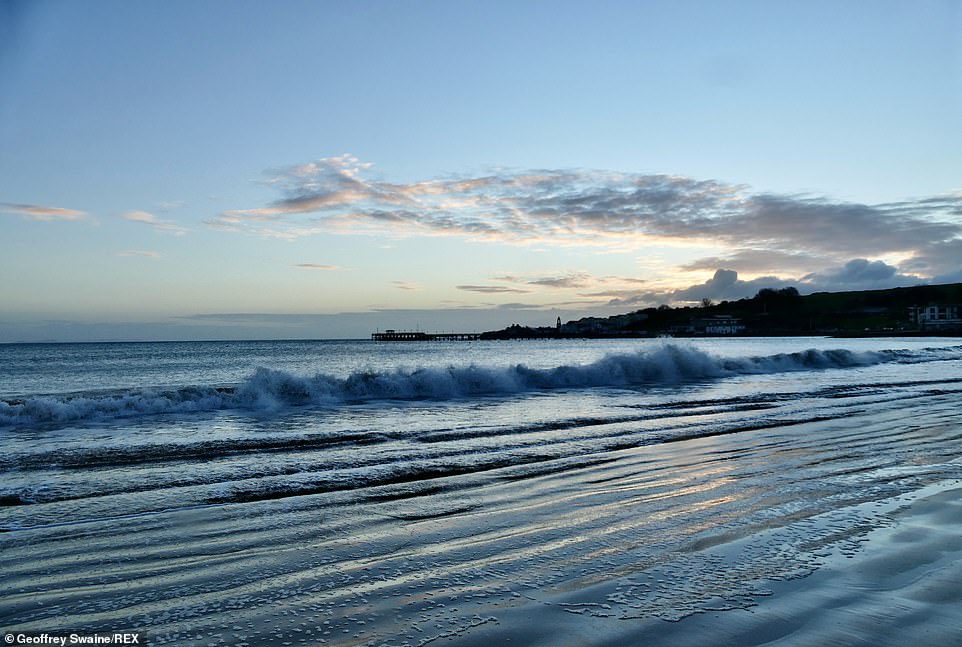 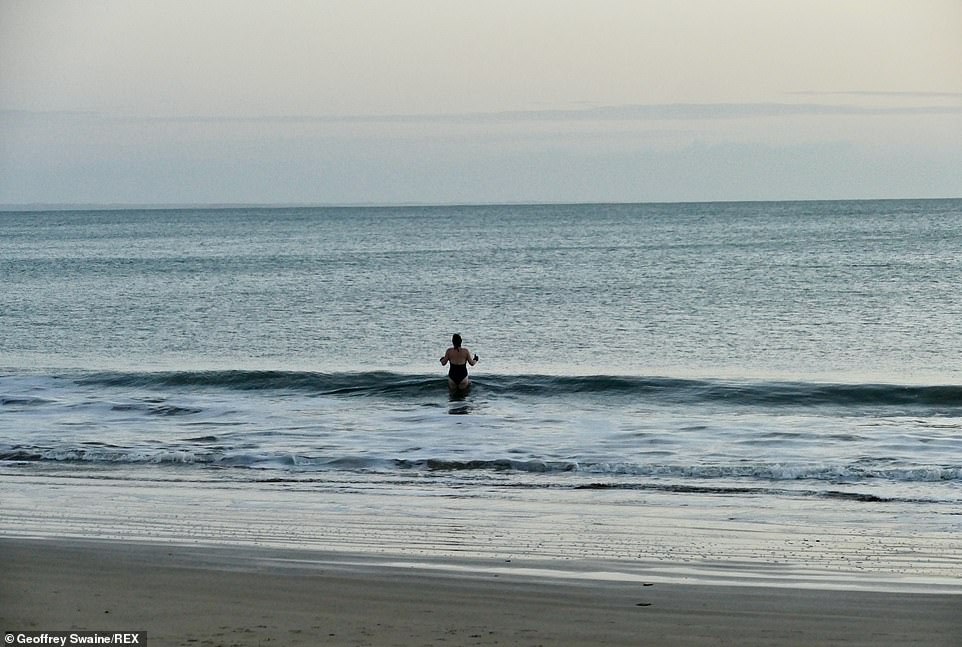 One courageous swimmer braves the icy waves and heads to the sea at first light in Swanage, Dorset, on Sunday 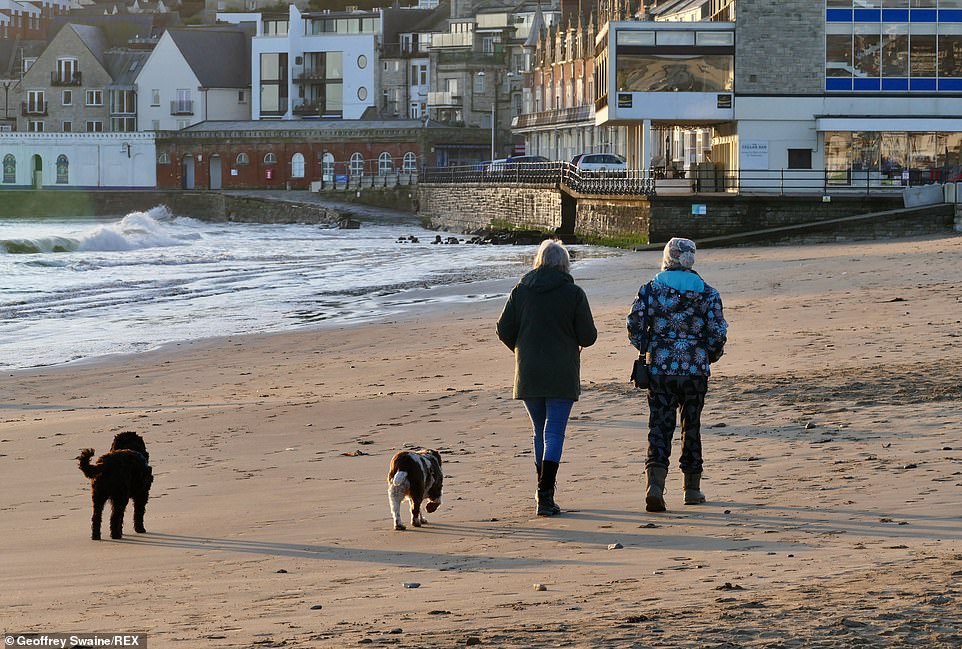 Dog walkers head out at sunrise to walk along the beach and make the most of the sun before it turns to rain later today in Swanage, Dorset

Higher areas in Scotland, the Pennines and Snowdonia are also likely to see some snow before the weekend is over.

And the downpours are set to stay in place until about Wednesday when cloud should clear but frost and fog are expected.

BBC forecaster Christopher Blanchett said: ‘Through the course of this evening and overnight, our concern is with ice and there is a Met Office yellow warning in force through west central Scotland and the south.’There is a chance of icy patches almost anywhere and under clear skies temperatures are readily falling away to sub-zero and in rural parts of the north east perhaps minus 6C.’

And NHS Greater Glasgow and Clyde (NHSGGC) has issued advice to ‘walk like penguins’ in the icy conditions to avoid getting injured.

It is urging people to bend their knees loosely, point out their feet slightly, extend their arms at the sides, walk flat-footed- taking short steps, and to keep their centre of gravity over the feet in order to avoid falling. 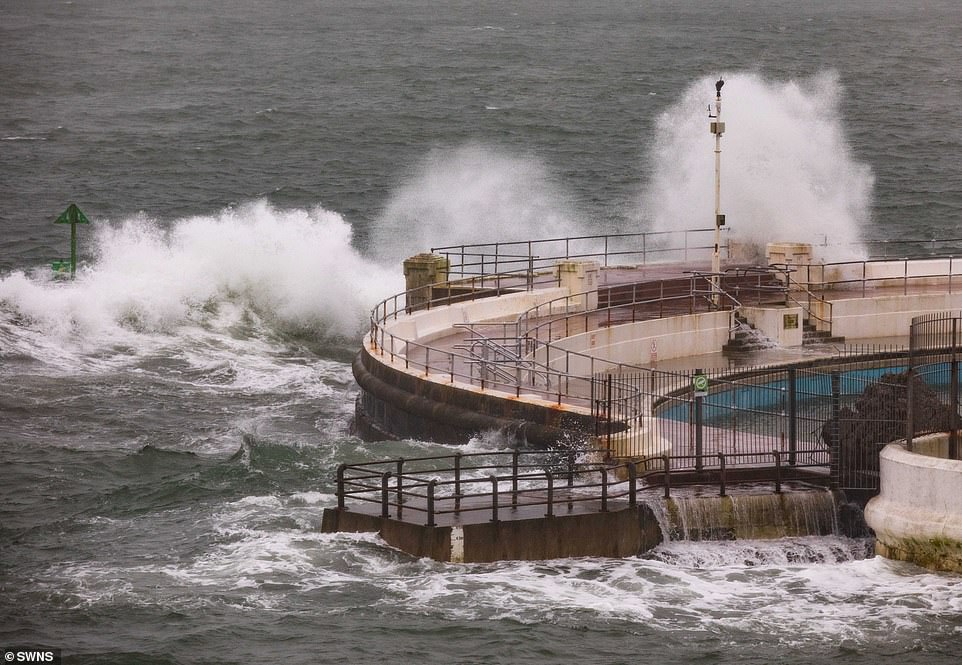 Huge waves crash into the Plymouth seafront in Devon on Saturday, as strong winds and rain hit the south west of England 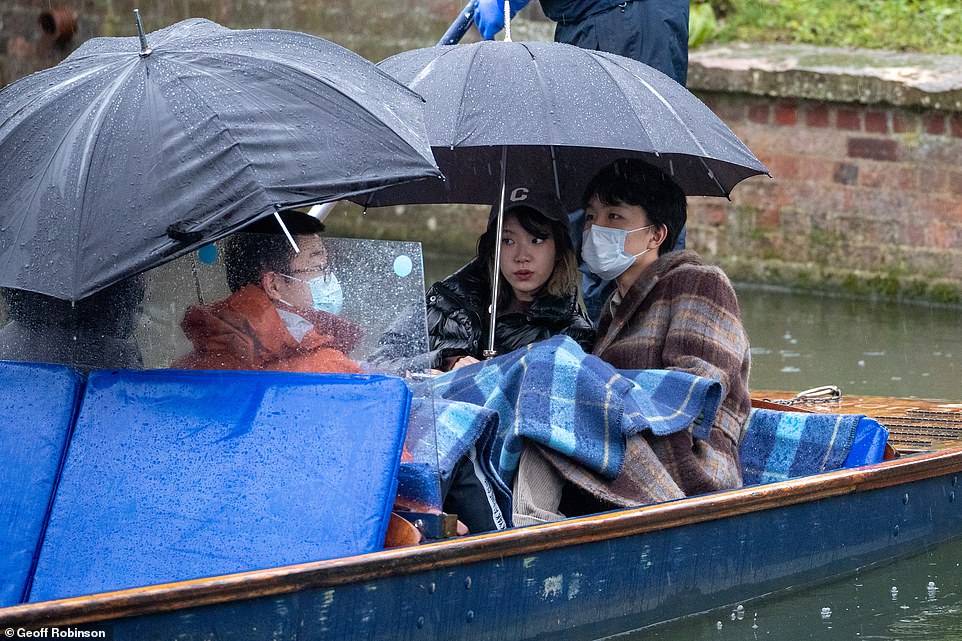 The Met Office reports there are currently 10 flood alerts in place, including in areas of Barnstaple, Leicestershire, Bristol and Somerset (Pictured: Rain falls on people punting in the River Cam in Cambridge on Saturday) 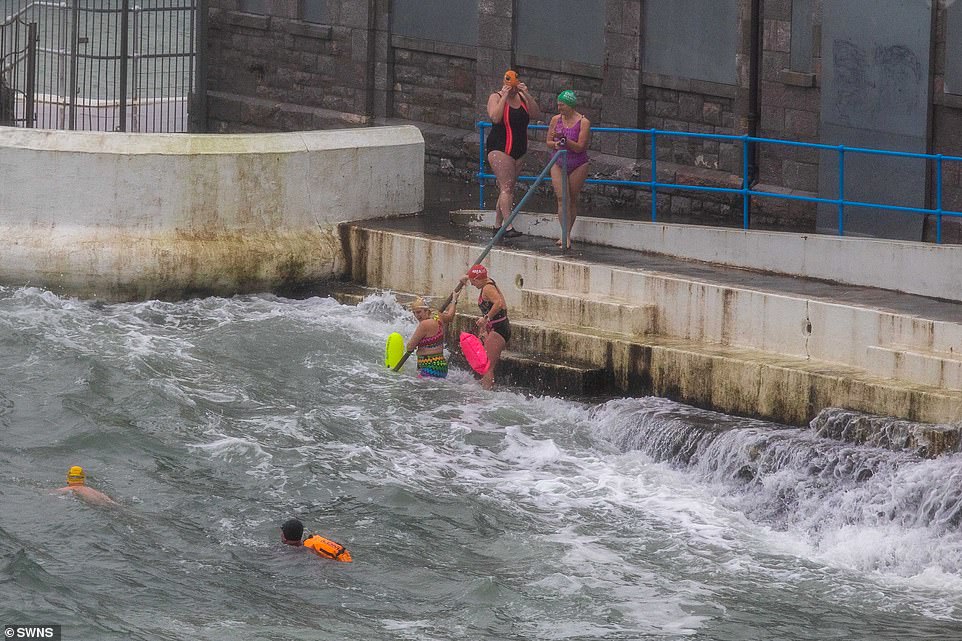 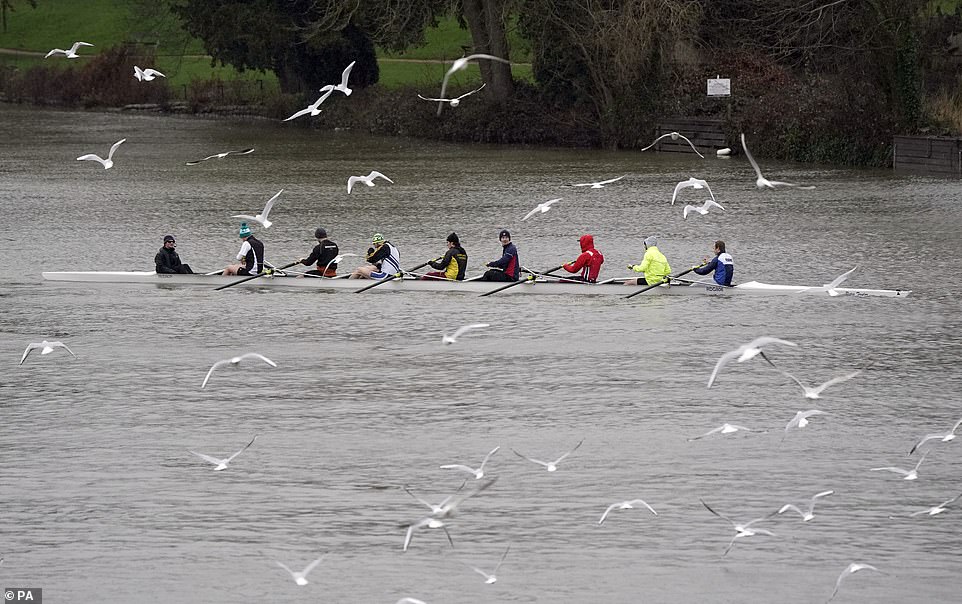 Linda de Caestecker, Director for Public Health at NHS Greater Glasgow and Clyde said: ‘While it might seem silly to walk or waddle like a penguin, in the context of the wintery conditions we’re seeing today, penguins know best.

‘If you find yourself out and about in icy conditions, adopting the penguin stance is a really effective way to move without falling.’

He added it would be bringing cloud, rain and further snow across the hills, rain for most and will mean something a touch less cold as the weekend begins.

He said: ‘Initially very wet on Saturday but that rain clears through apace and for most of the day it is a case of bright sunny spells and rain showers.

‘Those showers most frequent in the west, wintery on the hill tops, driest and brightest in the east.’

Temperatures in Scotland are expected to be between 6C and 8C and feeling cold in the brisk west wind .

Maximum temperatures in the South of the UK are forecast to reach around 10C or 11C. In the North of England around about 7C or 8C.

Leila Jinnah’s bespoke pieces are ethically made and absolutely stunning