London: Britain has joined with the White House in ordering its citizens to leave Ukraine as Prime Minister Boris Johnson told US President Joe Biden and other Western allies that he feared for Europe’s safety.

The White House told its citizens to leave Ukraine in the next 24-28 hours. 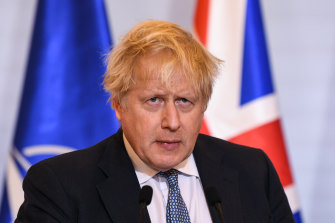 The advice was issued as Johnson spoke to the leaders of the US, Italy, Poland, Romania, France, Germany, the European Council, the European Commission and NATO in a virtual meeting.

“The Prime Minister told the group that he feared for the security of Europe in the current circumstances,” a Downing Street spokesperson said.

Russia has amassed more than 130,000 troops on its border with Ukraine and has been staging military drills in Belarus, on Ukraine’s northern border.

Nick Schiffen, a journalist with the American Public Broadcasting Service reported, citing unnamed US military officials, said the US believed Russian President Vladimir Putin had made up his mind to invade Ukraine and that it would begin next week.

Britain’s new advice to its citizens, issued just before 7pm on Friday night local time, came hours after the United States also told its citizens to leave Ukraine, with President Biden warning the US would not attempt rescuing any citizens caught up in conflict between Russia and Ukraine.

“The safety and security of British nationals is our top priority, which is why we have updated our travel advice. We urge British nationals in Ukraine to leave now via commercial means while they remain available,” Britain’s Foreign Office said.

Speaking earlier in Melbourne, US Secretary of State Antony Blinken said that the United States had issued its advice to citizens because of “troubling signs of Russian escalation, including new forces arriving at the Ukrainian border.”

“We’re in a window when an invasion could begin at any time, and to be clear that includes during the Olympics,” he said, after a meeting of the Quad foreign ministers.

The Winter Olympics end on February 20.

Singer, 49, was found hanged at his family home, inquest hears