The weed map of Britain: UK’s biggest POT spots are revealed showing places where police have seized the most cannabis plants

Police are seizing 900 cannabis plants a day with Britain’s weed hotspots located in the the West Midlands and the North of England, new figures have revealed.

Landlords have been advised to check for smells of cannabis, noise coming from extraction fans and evidence that tenants could be stealing electricity from nearby homes or street lights.

Officers have faced a wave of electricity thefts as cannabis growers steal energy to help them produce the drugs, with 10 such investigations a week since 2016.

The North West of England, including Greater Manchester and Merseyside, had the highest raw number of cannabis plant seizures last year with just over 55,000.

However the North East emerges with the highest rate when the figures are divided by population, with one seizure for every 98 people in that region of England.

And the East Midlands had the greatest increase last year, with police seizures of cannabis plants shooting up by some 28 per cent compared to the previous 12 months. 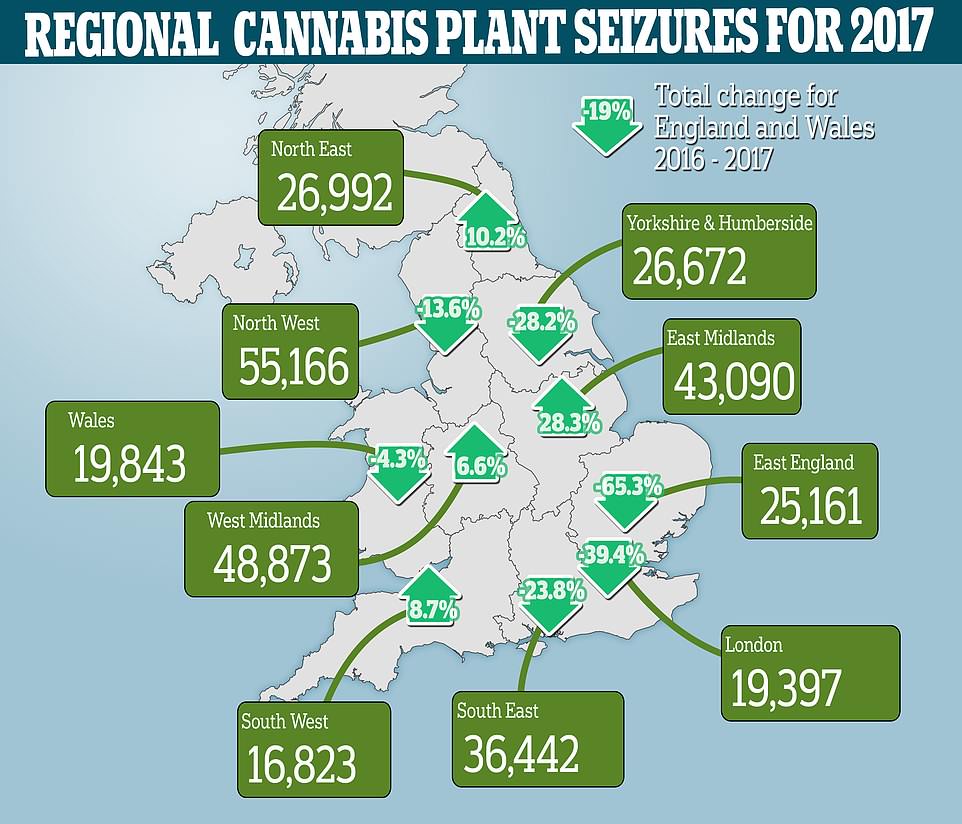 This map reveals Britain’s cannabis hotspots,  showing the number of cannabis plants seized by police in 2017

Where are the cannabis hotspots in England and Wales?

Cannabis plant seizures by population – one per ___ people:

London was at the bottom of the cannabis-seizures-per-population table, with one for every 458 people, followed by the South West of England with one seizure per 330 residents.

The South West also had the smallest absolute number of cannabis raids over the same period, with 16,823.

Landlords have been warned to check for cabling which could be used to illegally extract energy from street lights or neighbouring properties.

The police forces in Greater Manchester and West Yorkshire have had the highest numbers of such energy theft investigations since 2016, with 213 and 212 respectively.

The North West accounted for 36 per cent of all of England and Wales’ drug related electrical theft investigations.

Matt Boatwright of Direct Line said: ‘Cannabis cultivation remains prolific across the country and is a particular concern for landlords whose properties are being used for illegal activity.

‘The last thing a landlord wants is to find out a tenant has been using their property to grow drugs as not only will they face a police investigation, but there could also be significant damage to the property.

‘It can cost thousands to repair the damage caused by cannabis growers as buildings are often riddled with damp and require extensive repairs.

‘Repairing your property if it has been used as a cannabis farm will be a costly and disruptive process.

‘It is essential to conduct proper background checks on tenants, regularly inspect the property inside and out and watch out for suspicious activity such as the tenant asking to pay in cash for months in advance.’

Landlords were also warned to check for the distinctive smell of cannabis and noise coming from extraction fans if they suspected tenants of growing weed.

This week sacks full of cannabis were dragged out of Britain’s ‘biggest drug factory’ by police who found the substance hidden in tunnels at a disused quarry.

An estimated £1million haul of the drug was removed from a cannabis farm near Bradford-on-Avon in Wiltshire.

In March this year some £80,000 worth of cannabis was seized by West Yorkshire Police after they spotted a house with a suspicious lack of snow on the roof during cold weather.

The heat from the lamps which helped to grow the plants was melting the ice and snow off the roof at the four-bedroom home in Keighley. 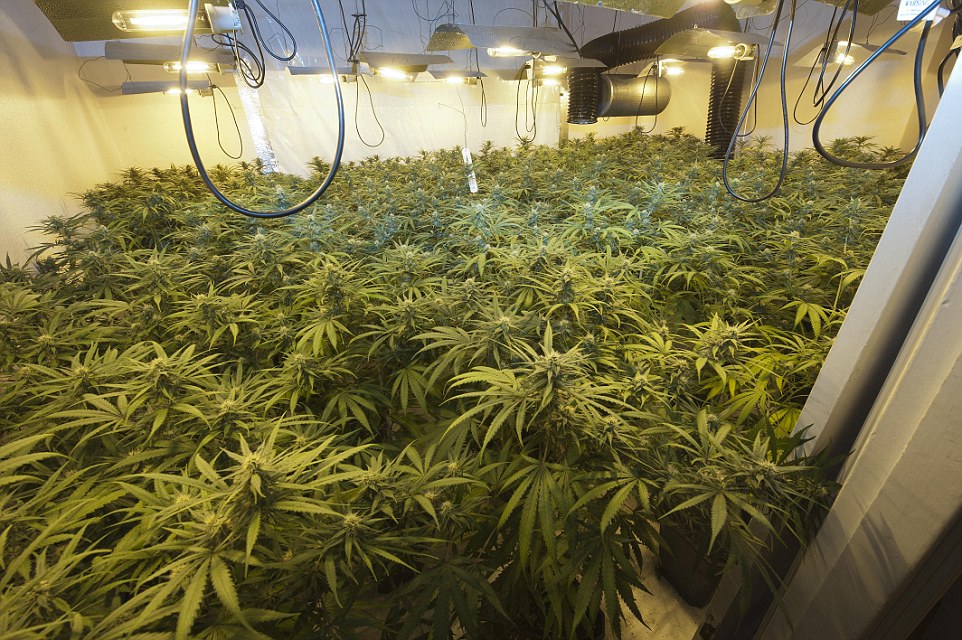 Greater London was at the bottom of the seizures-per-population table, with only one for every 458 people. Pictured: a police raid on a cannabis farm in Dulwich, south London

‘Predator 5’ Could Be Set in the Past

You’ll Be Stunned By All Of Prince Charles’ Strange Habits