British woman brawls with Spanish police and tells them ‘get the f*** off me before I punch you’ while her little girl cries out ‘Mummy!’ as officers arrest her partner for a parking offence

This is the astonishing moment a British couple brawled with Spanish police in front of their infant daughter after a row over parking turned violent.

The incident took place in Adeje in southern Tenerife on Monday morning after the couple came out of a bar where they had been drinking and found parking officers surrounding their car, which had been left in a disabled bay.

An argument over the bay then escalated into a brawl, with video taken from across the street showing police seizing the couple as a young girl – thought to be their daughter – screams ‘mummy’ and ‘daddy’. 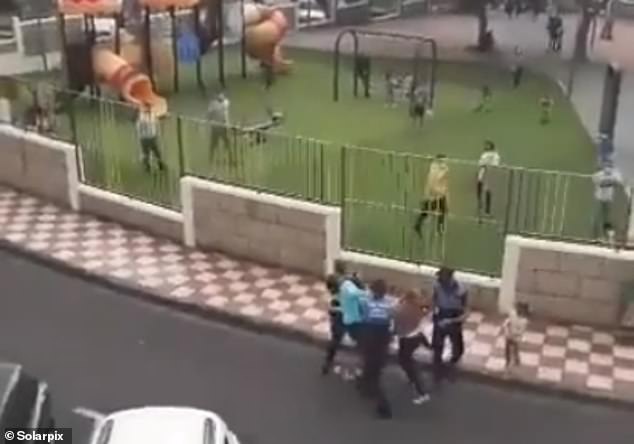 Officers bundle the man to the floor as his partner shouts ‘get off him’ and tries to pull officers away.

Bystanders then rush to carry the little girl to safety as she runs towards the fight, crying for her parents.

Two officers can then be seen pinning the man to the ground while a third wrestles with his partner, who is screaming expletives and throwing punches.

At one point she can be heard shouting ‘get the f*** off me before I punch you’ before swinging at the officer.

The cop eventually manages to wrestle her to the ground where she continues shouting, this time yelling ‘get off my f***ing neck’.

Eventually more police arrive and bring the situation under control.

It is thought the incident began after a disabled motorist alerted officers when he saw the spot had been occupied by a car without a permit.

Both Brits were reportedly arrested, but a spokesman for Adeje Town Hall said the woman was set free because she was in charge of a minor.

It was not immediately clear what if any punishment the couple have received.

The officers involved, who ended up calling for back-up, are local police officers employed by the town hall. 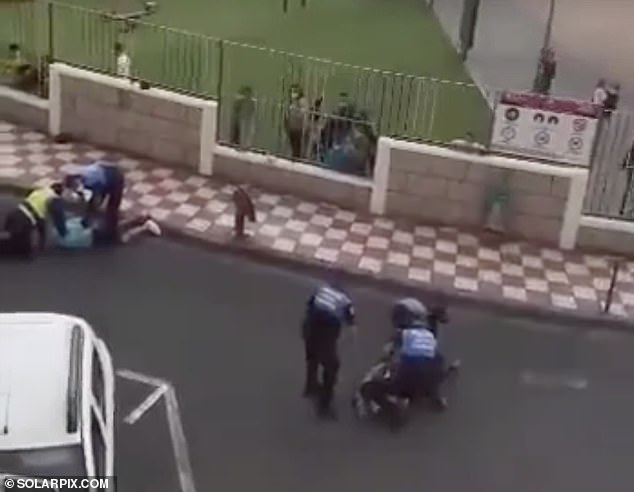 Another 44 migrants are caught crossing the English Channel

An old white man walks into a bar. Have you heard this joke?