These images show the shocking burns suffered by a British man after his e-cigarette blew up in his pocket.

Graham Tooby, a British photographer and videographer, was left permanently scarred and unable to work for two months after the incident in Dubai, where he lives with his wife Kathryn and their two boys, aged three and six.

Mr Tooby, 48, had been celebrating New Year with friends and family at his garden when he was suddenly engulfed in blue flames after the lithium battery in his vape machine exploded.

He told local media: ‘My brother in law threw water over me, but because lithium batteries don’t stop until they run out of energy it kept on burning.’ 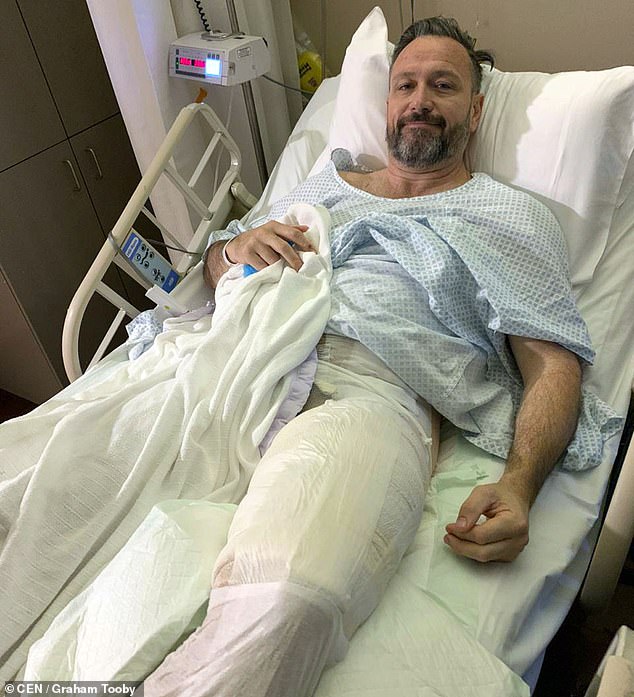 Graham Tooby in his hospital bed after the injury. ‘Without warning fireworks were coming from my pocket and we were all just trying to stop it,’ he said 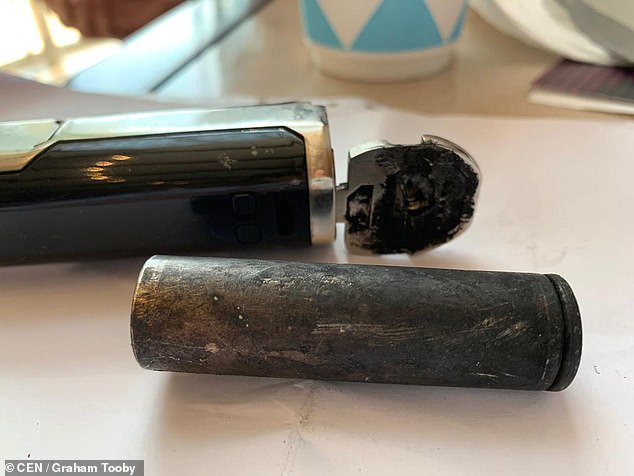 The electronic cigarette and battery that exploded. Mr Tooby said when he finally managed to pull off his trousers he saw that he had a large burn the size of a man’s hand at the top of his left thigh 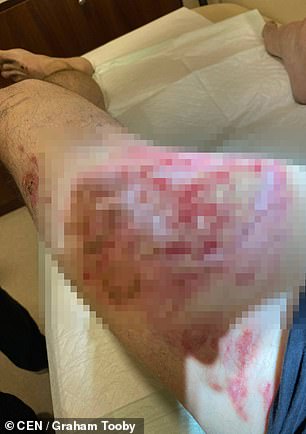 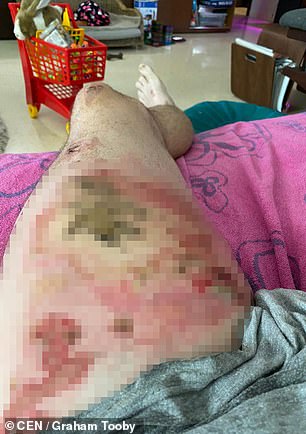 He added: ‘There was instant pain and panic and I didn’t really know what to do because it had all happened so suddenly, it wasn’t as though the device had heated up beforehand, it literally went from zero to blue flames and loud hissing in seconds.

‘Without warning fireworks were coming from my pocket and we were all just trying to stop it.’

When he finally managed to pull off his trousers he saw that he had a large burn the size of a man’s hand at the top of his left thigh, he revealed, adding that the whole incident had taken around 30 seconds but had seemed so much longer.

Mr Tooby said he was lucky that it missed his genitals – and feared what would have happened if his pocket had been one inch to the right. 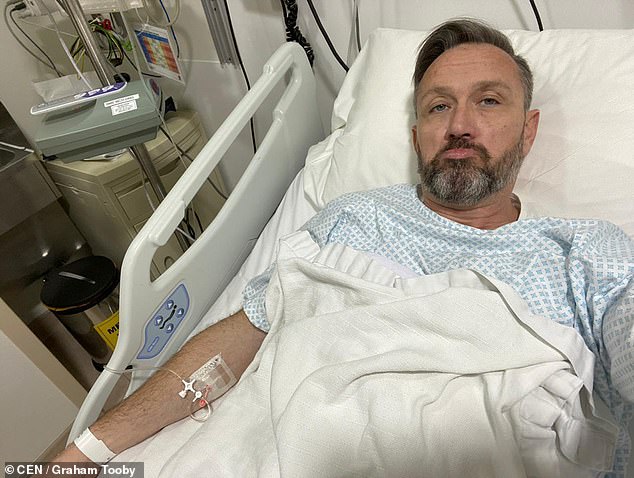 Mr Tooby has been unable to work for two months, and will have a permanent scar now

He was rushed to Rashid Hospital by ambulance for emergency burns treatment and subsequently had two more surgeries at MedCare Hospital by Dr Jamali.

The doctor – a specialist in reconstructive and plastic surgery – first of all removed the dead tissue and infection and then dealt with an infection of his blood.

Six weeks later he needed a skin graft from the back of his leg onto the front.

Mr Tooby said since the incident he had not smoked or vaped and added he was still grateful despite the injuries, because it could have been much worse if, for example, he had been driving on the motorway when it happened.

He said if people really want to use them they should make sure the batteries are not damaged and advises against machines where the battery can be changed by the user rather than a competent professional.

Mr Tooby was also glad that none of the children at the New Year’s party were near him and actually tucked up in bed when the explosion happened.

Seven-bedroom home which comes with its own HORSE RIDING centre

Model With Down Syndrome, Kate Grant, Inspires Many As New Brand Ambassador For Benefit Cosmetics Ireland