Brighton: The British Labour party says it backs the AUKUS alliance and would have signed up to it in power, but would kick Australia out of an expanded G7 if it didn’t commit to binding climate change targets.

Prime Minister Scott Morrison may skip attending the next round of climate talks – COP26 – set for November in Glasgow if he cannot get the Nationals to agree to net-zero targets.

Australia has come under sustained pressure, including from British Prime Minister Boris Johnson, to back net-zero by 2050. Currently, Australia’s goal is to commit to net-zero “preferably” by 2050.

Speaking at a side event at the Labour party’s annual conference in Brighton on Tuesday AEST, Labour’s foreign spokeswoman Lisa Nandy said the opposition supported an expanded alliance of democracies such as a “D10”, but that it would come with obligations on carbon reduction. 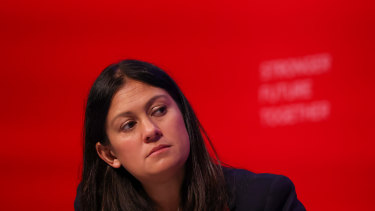 Would kick Australia out of the G7 over climate inaction: Lisa Nandy, British Labour foreign affairs spokeswoman, in Brighton, England, on Monday.Credit:Bloomberg

“A core part of standing for democratic freedoms is the fight against climate change and so if countries don’t sign up to those pledges, specifically Australia [those] binding targets, not in years and years but in the decade to come then they shouldn’t be welcome to have a seat at the table,” she said.

“We shouldn’t be expanding access to those who haven’t shown leadership on the issue,” she said.

With Britain chairing both the COP talks and the G7 this year, Johnson, a self-professed Australiaphile, invited Morrison to attend this year’s G7 summit in Cornwall, even though Australia is not a formal member.

The VIP invite enabled Morrison to hold a high-powered trilateral meeting with Johnson and US President Joe Biden to secure Australian access to their classified nuclear submarine technology as part of the new defence alliance AUKUS.

The deal will see Australia acquire its own nuclear submarine fleet. But it has enraged France whose $90 billion deal to build a diesel-electric submarine was canned as a result of the secret negotiations.

British Labour, hoping to be going to the polls as soon as next year, said it would back the alliance in power.

The opposition’s spokesman for Asia and the Pacific Stephen Kinnock said the pact was in Britain’s national interest. 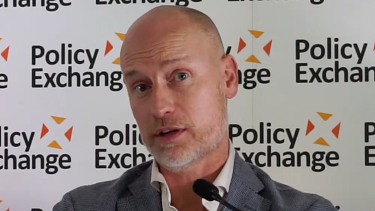 Labour’s spokesman for the Asia and Pacific Stephen Kinnock.Credit:PolicyExchange/YouTube

“Yes, we would have signed up to AUKUS,” Kinnock said, when asked by The Sydney Morning Herald and The Age if the deal would enjoy a Labour government’s backing.

“We think that it is the right thing to do for our national interest.

“We are increasingly concerned about Chinese expansionism in the South China Sea – so there is no doubt about that,” he said.

But speaking at the Politics Home event he said that a Labour government would not have gone behind France’s back.

“But what we would have done is do it in a way that didn’t involve betraying the French, frankly, which is what it really looks like, and there was no need for that.

“Foreign policy’s changed a lot over the last 150 years but one thing that has not changed is that conservative politicians always get a boost with their membership by having a go at the French.

“It’s such a tragedy that it happened because the country that benefits most from that division amongst Western, democracies is China – they love to see Western democracies fighting in that way amongst themselves,” he said. 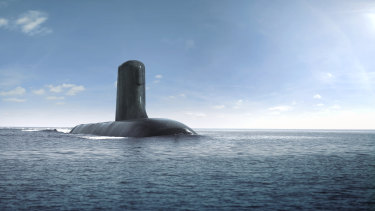 An artist’s impression of the Royal Australian Navy’s submarines under the now-defunct French deal with Naval Group.

He said the West needed to better pool research on cyber, quantum computing, artificial intelligence and defence technology because these were the next frontiers of conflict but expressed concerns that cutting the French would weaken EU cooperation.

“But I really worry about now is that the EU is just going to go off and do its own thing because of the way that this has been done in a pretty sneaky and underhand manner and that national interests,” he said.

But while the leadership strongly backed the new alliance, a rebel group of members successfully passed an emergency motion on the floor of the conference condemning the alliance, 70 to 30 per cent.

Labour member Marisa Aitken told the conference that Australia could not be trusted with nuclear technology because it might build a bomb.

“Of course, Australia has said it has no intention of building a bomb but in the future how can we possibly know?”

In criticisms that echoed those made by former Labour leader Jeremy Corbyn, Aitken said the submarines would be used for spying and make the region more unstable given China’s condemnation of the defence pact.

Brandis welcomed what he said was Britain’s tilt towards the Indo-Pacific following the United States’ pivot towards the region under former president Barack Obama. 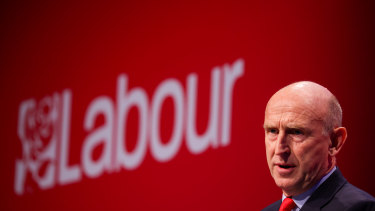 “Britain will no longer be half-hearted about essential alliances and treaties, in the UN, NATO, Five Eyes, International Court of Justice,” Healey told the conference.

HALF of results from coronavirus home testing kits could be unreliable