British vaccine could give strong protection against new super-mutant Covid strain: Tweaked version of AstraZeneca jab is in final trial stages and may be ready within weeks

A British vaccine that could provide strong protection against the new super-mutant Covid strain is already in the final trial stages, it was revealed last night.

Test results on the formula, developed by the team behind the Oxford/AstraZeneca vaccine, are due in the next few days.

Should it prove effective, it could be ready for use within a matter of weeks.

The news was delivered by immunologist Professor Sir John Bell, a member of the government’s vaccine task force, who also revealed it was too late to stop ‘the monster’ variant currently ripping through Southern Africa from reaching our shores.

Despite the Government’s travel ban, Sir John said it was only ‘a matter of time’ before it surfaced here.

When that happened, he added, it could be necessary to use modified forms of vaccine if the ones currently being used prove ineffective.

However, the good news was that Britain was already well placed to make the switch quickly thanks to the pioneering work of the award-winning Oxford AstraZeneca team. 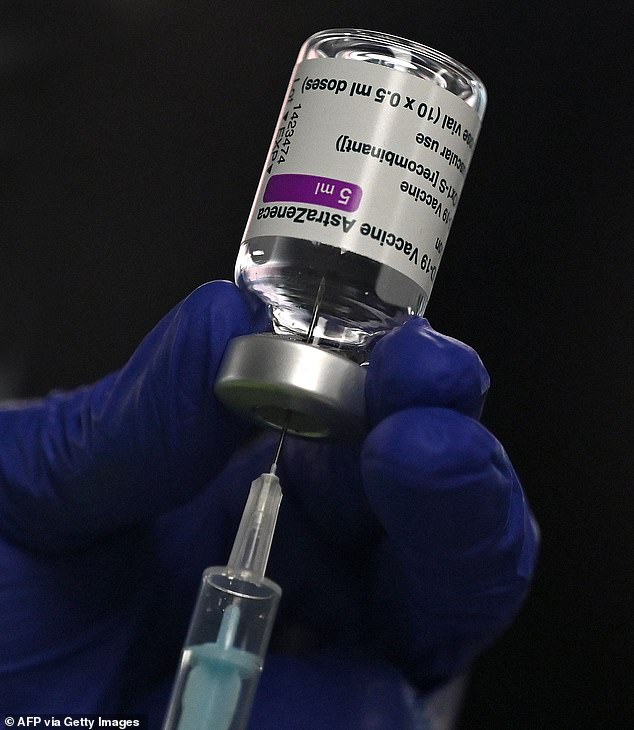 A British vaccine that could provide strong protection against the new super-mutant Covid strain is already in the final trial stages, it was revealed last night. Test results on the formula, developed by the team behind the Oxford/AstraZeneca vaccine (pictured), are due in the next few days.

The latest AZ formula was originally created to fight the first South African variant of Covid, which threatened to spread widely last year before being overtaken by the Delta strain.

If needed, it could be ‘plugged in’ to modify the currently-used AZ vaccine with relative ease and be administered through booster shots.

Sir John and his Oxford University colleagues have been closely monitoring the new variant, B11529, which has some 30 mutations, since its surge began a few days ago.

But a more detailed analysis will get under way early next week using samples of the virus flown to Britain from South Africa in secure canisters.

Scientists hope to learn more about it such as its ability to spread and its capacity to cause serious illness.

Though it has already infected many South Africans and appears to transmit with worrying rapidity, the early signs are that it may be less dangerous than other strains, Sir John said.

‘The big question is, are people getting really sick? Are the hospitals full? The answer to that is “No”.

‘Some of my colleagues have called [the new variant] a monster. There’s a lot of panic.

‘We should just stay calm. We need to behave as if this thing is going to create breakthrough infections. If it doesn’t, then fine. If it does, we need to be ready.’

Kevin Bacon on Not Acting ‘Likable,’ Whether ‘Tremors’ Could Ever Come Back

How Joe Mantello Renewed 'Boys in the Band', a Once-Reviled Gay Classic, for a New Generation