Human remains have been discovered in a garden being dug up by builders – just 20 miles away from the Rose and Fred West ‘house of horrors’.

Forensic tents have been put up on the domestic construction site, in Kemble, Gloucestershire, after the gruesome find by workers.

Police are currently investigating the origin of the remains and said inquiries are continuing.

But shocked local residents say there have been ‘inevitable rumours’ around the scene that the finds could somehow be related to the infamous serial killers.

The latest scene was being guarded by officers this morning as the probe, which began last Thursday, continues. 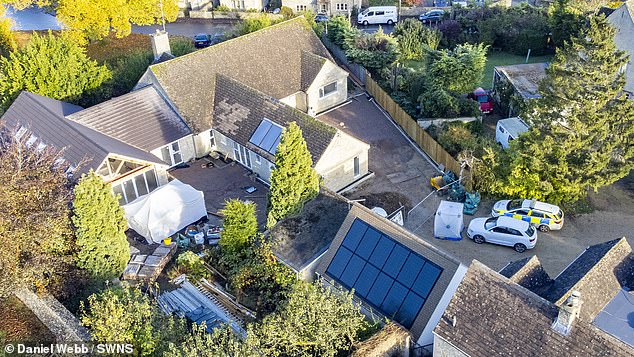 The scene is not visible from the ground due to surrounding trees, fences and properties blocking the view.

But aerial photographs revealed crime scene tape on the entrance to a garden area, where it appears builders have dug into the ground as they prepare the area to lay slabs.

A large mound of soil could be seen just metres away, indicating that the remains may have been unearthed during the garden landscaping work.

Local residents say police visited Kemble Primary School and informed staff of the ongoing incident after unknown details were revealed by a child.

Another local resident, who did not wish to be named, said there were already rumours it could be linked with the West’s murderous spree.

They said: ‘I didn’t even know it was happening until other parents were talking about it on the playground this morning.

‘I think the reason for the crime scene is being kept very quiet at the moment.

‘Whenever there’s a big crime scene in Gloucestershire, everybody thinks about Fred and Rose [West].

‘Obviously there’s nothing to say it is one of their victims, but who knows how many there were and where they could be hidden.’ 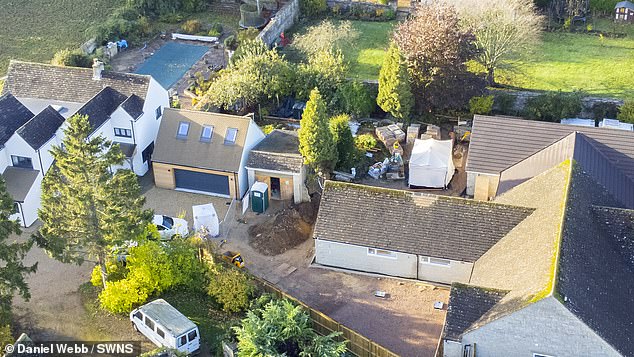 Aerial photographs revealed crime scene tape on the entrance to a garden area, where it appears builders have dug into the ground as they prepare the area to lay slabs

Gloucestershire Constabulary has confirmed human bones were found on site but said it was not in a position to state where they came from or who they belonged to.

A spokesperson said: ‘Police received a report that human bones were discovered by a builder working at a property in Kemble last Thursday (4 November).

‘Officers remain at the scene and inquiries are continuing.’

Earlier this year, Gloucestershire Police carried out excavation work in a café cellar where 15-year-old waitress Mary Bastholm was thought to have been buried 50 years ago.

No human remains were found after a two week dig.

I'm a northern girl and I'd love a job on Coronation Street after Hollyoaks axe, says Sarah Jayne Dunn