Businessman, 55, loses battle to cut down neighbour’s trees that he claims have kept his £1 million property in darkness

A businessman who claimed his £1million home was kept in darkness by his neighbour’s trees has lost a battle to have them axed.

Israr Chaudry, 55, claimed the 60ft trees left his luxury property in an upmarket part of Lanarkshire without light.

He turned to high hedge laws after failing to come to an agreement with the hedge owners who live directly behind him. 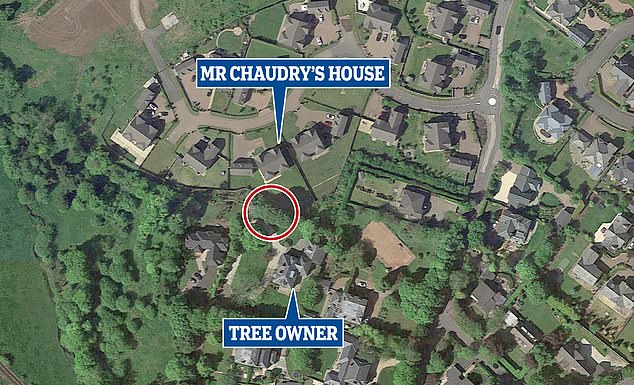 Israr Chaudry, 55, claimed the 60ft trees (circled) left his luxury property in an upmarket part of Lanarkshire, without light

Mr Chaudry, an IT consultant, said he feared for his family’s safety should one of the massive trees come crashing down on the house during freak weather.

But he was left disappointed when South Lanarkshire Council threw out the application and ruled the trees did not form a hedge and did not represent a ‘significant barrier’ to light.

In a last ditch bid to have the trees brought down he appealed to the Scottish Government but was told it was outwith their jurisdiction and the council’s ruling stood.

Mr Chaudry had previously asked for the appeal to be granted in a letter to the government.

He said: ‘The high hedge forms a barrier to light.

‘The high hedge owner and his property is already on high ground and the high hedge is also significantly above two metres forming an enormous barrier to light and is substantially affecting the enjoyment of our garden and home.

‘During the day, as the sun moves across the sky, the high hedge blocks light to large areas of the garden.

‘I have on many occasions offered to speak to the high hedge owner to come to a compromise or at least have a discussion separately and through mediation. 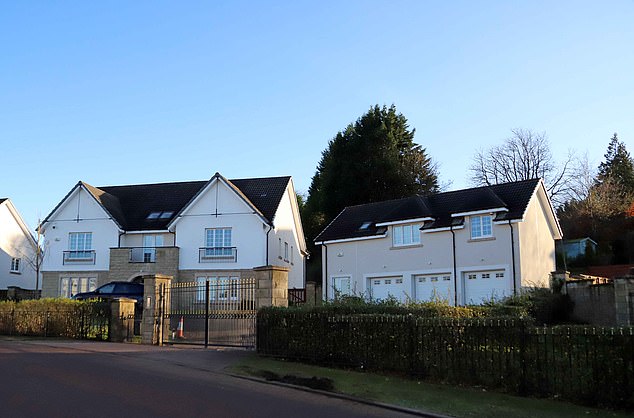 Mr Chaudry (pictured, his house) turned to high hedge laws after failing to come to an agreement with the hedge owners who live directly behind him

‘This has been ignored and the high hedge owner will not have any discussion.

‘It would also be reasonable to consider parts of the high hedge to be a dangerous threat to our home that could potentially cause injury or worse, particularly at times of high winds or storms causing it to fall. This is a major concern for the safety of my family.’

Explaining their decision to reject his application, South Lanarkshire Council said: ‘Given the spacing of the trees, as well as the lack of hedge management, the decision of the arboricultural officer and planning service is that this feature is one of trees rather than a high hedge.

‘As such the decision of the council is that the trees, as observed on site, are outwith the scope of the High Hedges (Scotland) Act and it is therefore not possible for the council to further consider the application in this instance.’

Rejecting Mr Chaudry’s appeal, Scottish Government case worker Karen Cowie said: ‘In this case the council took the view that the trees which are the subject of your application are not a ‘high hedge’ within the meaning of the High Hedges (Scotland) Act 2013.

‘We accept that the decision notice states that the council has determined that no action should be taken in respect of the application, however, on reading the appeal documents as a whole it is clear that this is because of the conclusion they reached about whether the trees constituted a high hedge.

‘We do not consider that we have jurisdiction to deal with this appeal.’

Ben Affleck Admits He Lost His 'Passion' for Playing Batman: 'It Was Time to Move On'

I was groomed into a gang at 11, stabbed through the heart at 18 and could be killed if I leave: Inside London's notorious gangs