We were all scandalised by the crooks and charlatans in collared shirts on show at Banking Badly. Yet not two minutes after Kenneth Hayne’s royal commission into banking and financial services misconduct, the government now wants to wind back responsible-lending legislation.

Apparently it’s way too onerous for companies drowning in profit – or it might get in the way of innovation (once a word with real meaning, now a synonym for cutting corners). Clap along if you feel like appiness is the truth.

On Monday, Financial Counselling Australia releases a heartbreaking report on a new form of credit which is turning people’s lives upside down. Just a year ago, when surveyed by FCA, a third of financial counsellors said they saw clients with buy now, pay later debt. Now that’s spiked to 84 per cent of everyone they see. 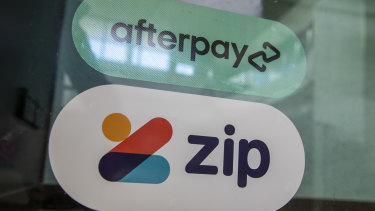 Afterpay, Zip and other BNPL providers are being targeted by consumer groups. Credit:Louie Douvis

Almost two-thirds of those struggle to pay essentials: food, rent, utilities, medical expenses including medication. Some even use their buy now, pay later accounts to pay their supermarket bills. The clients who spoke to the counsellors prioritised BNPL repayments over rent, food and utilities because of the pressure applied by the creditor and, in about half the cases, because they needed to keep using the facility to buy food.

To buy food on the never-never.

BNPL is the shiny new toy of credit. It’s a sector that’s supposed to be self-regulating. It has a code that supposedly stops exploitation of Australian consumers. But it turns out consumers are getting screwed over, time and time again, by this bright shiny toy. And politicians are so distracted by all that glisters they don’t recognise how damaging it can be.

What do they call it? Fintech innovation. When do they want it? Now. Catchy, isn’t it? The real story, though, is that BNPL is not innovation. It’s a credit card with fun branding! Look, Mum, I can get that Pixel phone right now, walk out of the shop with it and then pay it off over four instalments. No fuss. Often a very cursory examination of your financial situation and, gloriously, no interest. Until you pay late. Then BNPL gets so interested in you, it levies late fees like there’s no tomorrow. For some consumers, it feels like there is no tomorrow.

Consumer groups fought for years to get banks to recognise hardship. Banking is regulated so banks are now forced to put provisions in place for those who are struggling. That support is nearly impossible to find from a BNPL provider. When the FCA’s financial counsellors were asked to rate out of 10 the hardship provisions of these companies, Afterpay, Zip and LatitudePay scored fives. Another provider, Humm, failed.

There is no legal requirement to make affordability assessments or credit checks. You just rock up, there’s a cursory once-over-lightly, and suddenly you have one, two, three or even more accounts. There is no question that these companies must be regulated and covered by the National Credit Code to protect consumers from unsafe lending practices.

As a young mother of three on a junior journalist’s wage, I ran into credit card debt troubles. I kept rolling it over with big and bigger debts until the bank cancelled my card. That turned out to be the best thing that ever happened to me. In those days, we didn’t have what is now called a hardship clause. But this is 2021 – and BNPLs have little idea of hardship.

The problem here is the BNPL profit model is built on high volumes and knowing people will be late to pay. Afterpay, now more in the public eye because of its massive takeover by Jack Dorsey’s Square, said it would do more to manage late fees. Now those are down from 20 per cent of revenue to 10 per cent of revenue. But one analyst predicts that proportion will rise again as the company shifts its business to the US, where Afterpay is in trouble over the way it charges and what consumers understand about the BNPL process.

Another BNPL company, Laybuy, revealed that in the six months to September this year almost half its revenue came from late fees. This is revenue built on people’s inability to pay.

Both the Coalition and the ALP welcome competition among credit providers. A spokesperson for Jane Hume, the Minister for Financial Services, says the BNPL code “provides standards around affordability, as well as allowing customers access to Australian Financial Complaints Authority if they need it – a free and efficient source of justice and arbitration for financial products”. The ALP’s spokesperson for financial services, Stephen Jones, says: “Labor believes they are credit products and should be appropriately regulated.”

In both New Zealand and Britain, BNPL is on its way to being part of the regulatory framework. The FCA’s chief executive, Fiona Guthrie, says Australia must follow.

“Australia needs to conduct a specific and independent review of the law and develop fit-for-purpose regulation under the National Credit Code,” she says. “The BNPL industry itself needs to improve the way it treats customers in hardship.”

Regulation is an entirely good thing. If only financial services institutions felt the same way, we’d have fewer Australians in debt they can’t beat.

LinkedIn to make it easier for moms to add motherhood skills, career gaps to resumes

These LGBTQ+ Models Just Might Change the Industry Forever