US C-RAM anti-rocket system takes down missiles fired by ‘terrorists’ at the American Embassy in Baghdad: Three injured including children in attack after Tehran vowed revenge for Soleimani’s killing

The embassy’s C-RAM defense system – supposed to detect and destroy incoming rockets, artillery and mortar shells – was heard during the attack. Videos also show the defense system in action.

‘Three rockets were fired toward the Green Zone,’ a high-ranking Iraqi official told AFP on condition of anonymity.

‘Two of those fell on the grounds of the American embassy, and the other on a school nearby, injuring a woman, a girl and a young boy.’

The area is home to diplomatic missions and the seat of Iraq’s government.

Three of the missiles struck within the perimeter of the American Embassy, officials said. Another hit a school located in a nearby residential complex. 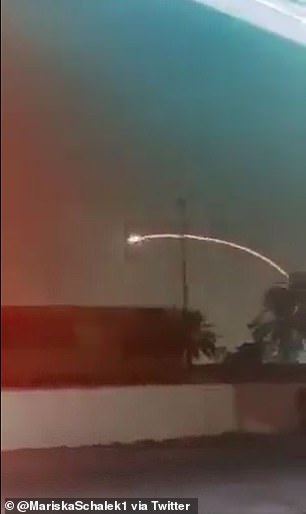 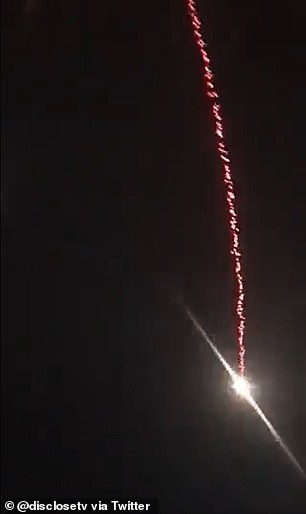 Video shows a rocket attack directed against the U.S. embassy in Baghdad. The US C-RAM anti-rocket system was engaged during the attack 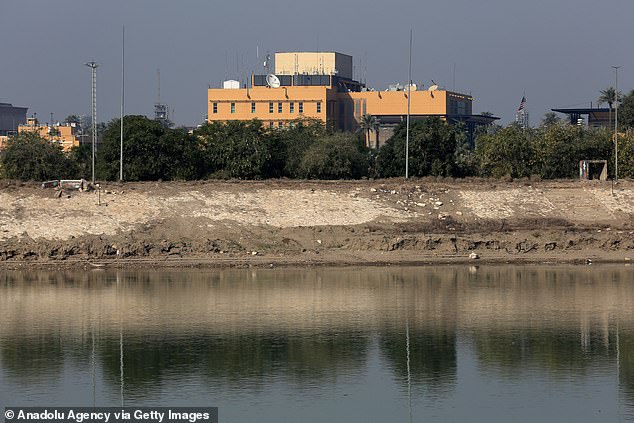 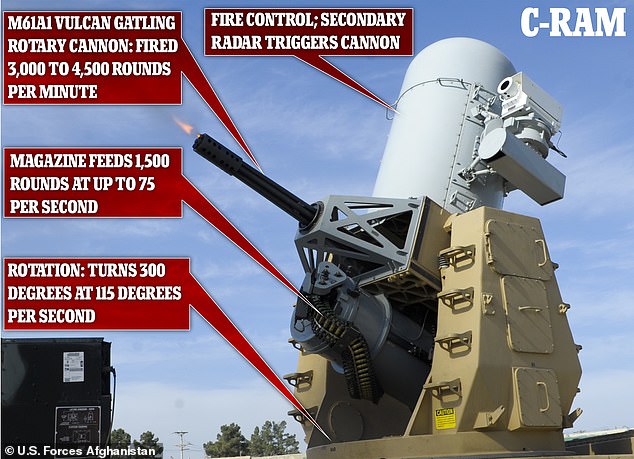 The embassy’s C-RAM defense system – supposed to detect and destroy incoming rockets, artillery and mortar shells – was heard during the attack 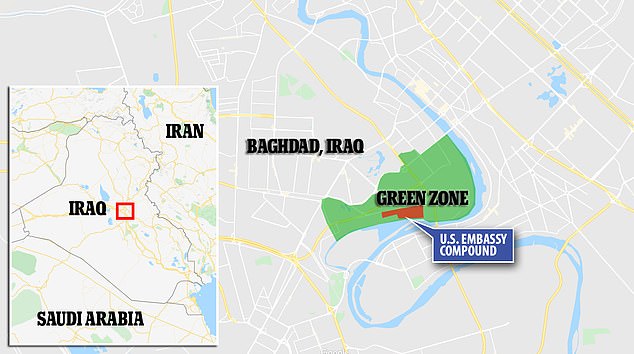 The U.S. embassy compound in Iraq is located in Baghdad’s Green Zone

The officials spoke on condition of anonymity because they were not authorized to talk to the media.

The rockets had been launched from the Dora neighborhood of Baghdad, the Associated Press reported.

The U.S. Embassy in Baghdad said in a statement that its compound had been attacked by ‘terrorists groups attempting to undermine Iraq’s security, sovereignty, and international relations.’

The attack is the latest in a series of rocket and drone attacks that have targeted the American presence in Iraq since the start of the year, following the second anniversary of the U.S. strike that killed Iranian Gen. Qassim Soleimani and Iraqi militia commander Abu Mahdi al-Muhandis.

Last Thursday, a series of attacks targeted American troops in Iraq and Syria. Rockets struck an Iraqi military base hosting U.S. troops in western Anbar province and the capital.

Pro-Iran Shiite factions in Iraq have vowed revenge for Soleimani’s killing and have conditioned the end of the attacks on the full exit of American troops from the country.

Some 2,500 troops will remain as the coalition shifts to an advisory mission to continue supporting Iraqi forces.

The top U.S. commander for the Middle East, Marine Gen. Frank McKenzie, warned in an interview with The Associated Press last month that he expects increasing attacks on U.S. and Iraqi personnel by Iranian-backed militias determined to get American forces out.

The website of Iran’s supreme leader Ayatollah Khamenei has published an animated video that appears to show a robot calling in a drone strike to assassinate US president Donald Trump.

The animated video was part of a contest to mark the anniversary from the killing of Iranian General Qassem Soleiman on January 3 2020 from an American drone strike in Baghdad.

Titled ‘Revenge is inevitable’, the video appears to show Trump on the golf course at Mar-a-Lago, Florida, being targeted in a drone strike. 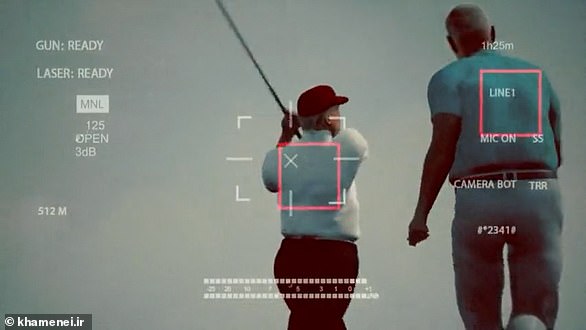 The video shows Trump, on the golf course at Mar-a-Lago, Florida, being targeted in a drone strike 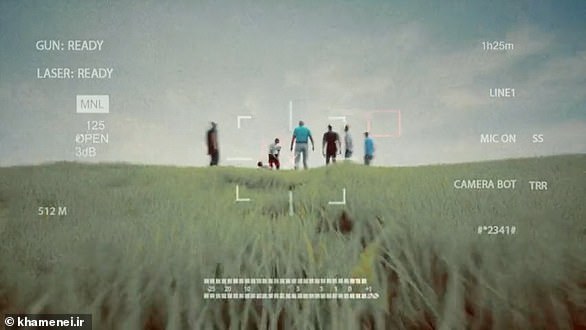 ‘If not, I’m telling all American leaders, don’t doubt that the hand of revenge will come out of the sleeves of ummah,’ Mr Raisi said, referring to the worldwide community of Muslims.

The video, posted on Wednesday, opens with an image of what is supposed to be Trump’s house in Palm Beach.

An American flag can be seen on the golf course where Trump, who is wearing a MAGA cap, is standing with four other men.

The video suddenly cuts to a small remote-controlled vehicle which has a camera on it. It then cuts to a drone operator in an office filled with screens following the vehicle.

The drone operator, who has a photo of Soleimani next to his screen, then hacks into a nearby CCTV camera and a message pops up saying ‘access granting’ – meaning the remote-controlled vehicle can move without being noticed. 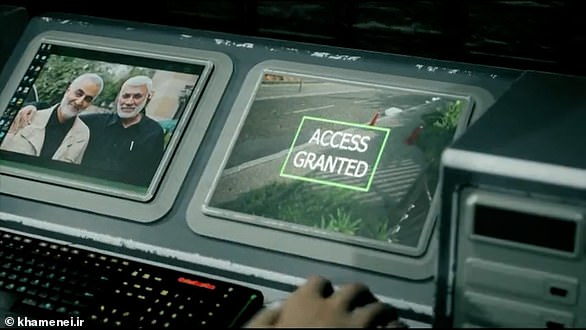 The video then shows aerial footage of a drone as it approaches Trump’s Mar-a-Lago while the vehicle moves in on the former President at the golf course.

The drone operator then manages to hack into Trump’s phone and another man’s phone, and a message appears which reads: ‘Soleimani’s murderer and the one who gave the order will pay the price’.

The drone then flies directly over Trump and a green box appears on the screen around the former President as he reads the message on his phone.

The video then suddenly cuts to a black screen with a message with reads: ‘Revenge is definite’. 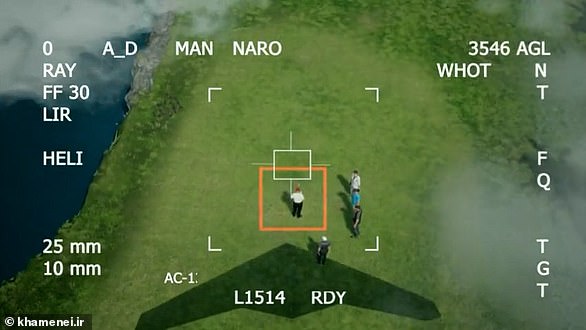 The video shows Mr Trump, on the golf course at Mar-a-Lago, Florida, being targeted in a drone strike

Khamenei, in a statement accompanying the video posted on his website, said the video was released ‘on the eve of the second anniversary of the martyrdom of General Haj Qasem Soleimani and the accompanying martyrs based on the statements of Ayatollah Khamenei about Martyr Soleimani’.

Khamenei is quoted as telling Soleimani’s family: ‘Martyr Soleimani is permanent, he is alive forever.