Storm in a tearoom: Outraged cafe owner goes on a Basil Fawlty-esque rant and issues lifetime bans to customers who moaned about their lunch on TripAdvisor

An outraged Basil Fawlty-esque cafe owner has starting banning customers who moaned about their lunch on TripAdvisor from his tearoom life.

Nearly one third of all reviews of Oriel Daniel Tearoom in Anglesey, north Wales, left on the popular travel website are ‘average, poor or terrible’.

But the cafe’s TripAdvisor account, ‘Daniel – the master butler’, has responded to bad reviews by telling the unhappy customers never to return to his cafe. 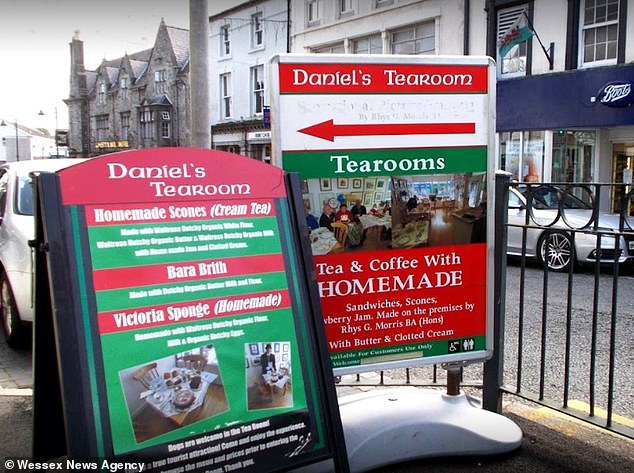 Nearly one third of all reviews of Oriel Daniel Tearoom in Anglesey, north Wales, left on the popular travel website are ‘average, poor or terrible’

Embarking upon long and bizarre rants akin to those made by John Cleese’s Basil Fawlty from the sitcom Fawlty Towers, ‘Daniel – the master butler’ has accused bad reviewers of ‘taking advantage of his generosity’.

He’s barked at customers taking to TripAdvisor, banning them from ever again entering his cafe, and said he’ll contact police if things get out of hand.

The tearoom owner has even warned that he will be picking out perpetrators who dare to re-enter his shop using CCTV cameras installed. 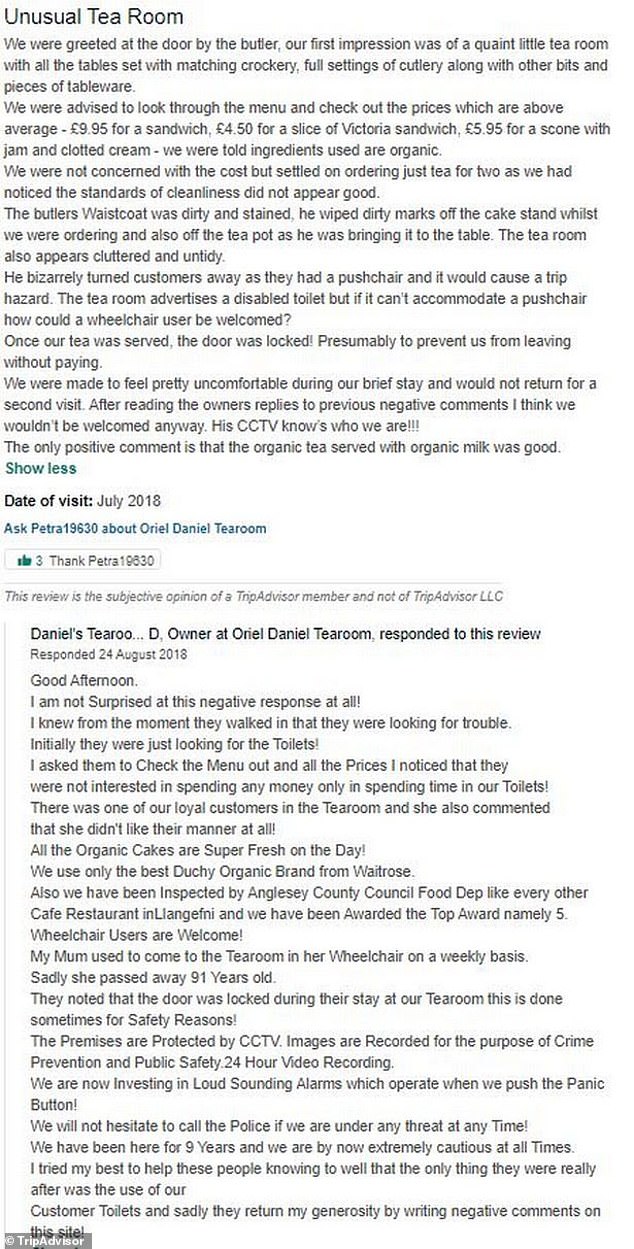 ‘Daniel – the master butler’ has accused bad reviewers of ‘taking advantage of his generosity’, barked at customers taking to TripAdvisor, banning them from ever again entering his cafe, and warned that he’ll contact police if things get out of hand 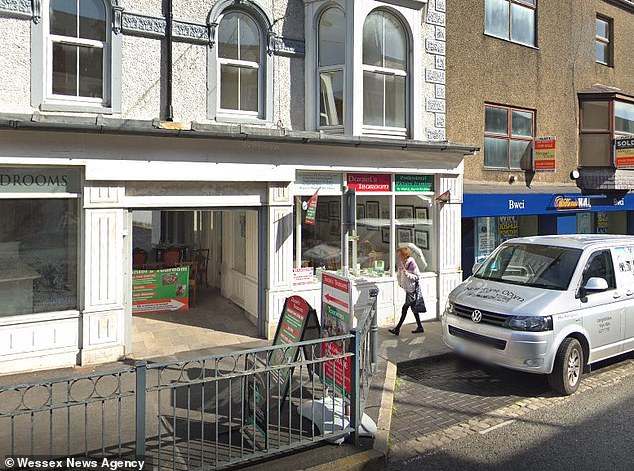 But the cafe’s TripAdvisor account, ‘Daniel – the master butler’, has responded to bad reviews by telling the unhappy customers never to return to his cafe

When one customer said that she was ‘flabbergasted’ when a pot of coffee and a ham sandwich cost her £20, ‘Daniel – the master butler’ responded with an emphatic: ‘What a Load of Pure Rubbish!

‘Listen here you, we know who you are, we have CCTV Recording here so don’t bother coming here again because you are banned for life.’

Another customer alleged that she and her husband were kicked out of the tearoom for complaining about an undercooked egg.

Taking to TripAdvisor, ‘Daniel – the master butler’ sardonically responded:  ‘This lady obviously has no idea what a proper sandwich tastes like!

‘Madam I knew from the moment you walked in, you were looking for a free lunch.

‘You are now banned for life from our Duchy Organic Tearoom in Llangefni! Don’t bother coming to this Town again, you are not welcome do you hear me?’

Another review left on the site read: ‘Once our tea was served, the door was locked! Presumably to prevent us from leaving without paying.

‘We were made to feel pretty uncomfortable.’

One review from November, posted by a customer calling herself ‘The Welsh Daisy, of Menai Bridge’, moaned: ‘Was looking for a quick coffee before attending a meeting so called here. Firstly the way in was barred by lines of chairs.

‘We were just about to turn round and leave when a young man moved two chairs to let us in. How we wish we had turned round.

‘On entering there was a strong smell of damp. The elderly gentleman, who looked like something from the Adams Family, immediately welcomed us so we sat down.

‘All the tables were fully laid with every possible piece of cutlery, crockery, etc including cake stands. 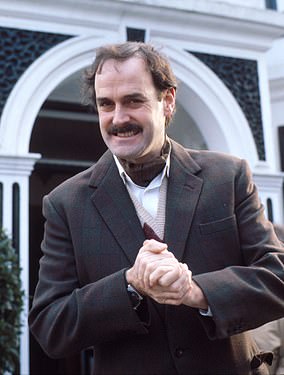 Fawlty Towers was inspired by the Monty Python team’s stay in the Gleneagles hotel in Torquay, where hotelier Donald Sinclair was described by John Cleese (pictured as Basil Fawlty) as ‘rude’, throwing a bus timetable at guests when they asked what time the buses were (stock)

Basil Fawlty is the main character of John Cleese’s iconic 1970s sitcom Fawlty Towers. The proprietor of the hotel Fawlty Towers, he is a cynical and snobbish misanthrope desperate to belong to a higher social class.

In one episode, as upper-class guests leave, Basil rants: ‘You snobs! You stupid stuck-up, toffee-nosed, half-witted, upper-class piles of pus!’

As Basil desperately tries not to ‘mention the war’ in another episode, he slips in front of his German guests: ‘So, that’s two egg mayonnaise, a prawn Goebbels, a Hermann Goering, and four Colditz salads.’

When asked by a hotel guest if there is ‘anywhere they do French food’, Basil retorts: ‘Yes, France, I believe. They seem to like it there. And the swim would certainly sharpen your appetite. You’d better hurry, the tide leaves in six minutes.’

Fawlty Towers was inspired by the Monty Python team’s stay in the Gleneagles hotel in Torquay, where the proprietor Donald Sinclair was described by Cleese as ‘rude’, throwing a bus timetable at guests when they asked what time the buses were, and calling American-born Terry Gilliam ‘too American’. 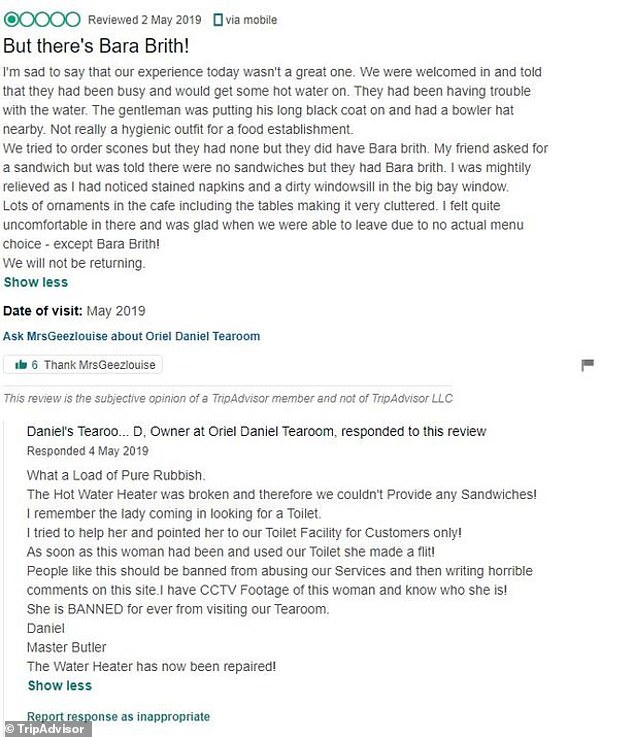 The cafe owner has hit back at a flurry of bad reviews by claiming ‘What a load of rubbish’, before dissecting his own version of events, and then telling them not to return

‘We asked for coffee but there was no choice of coffee. The menu seemed to describe everything as “nice”.

‘The gentleman kept telling us that we could have plenty of nice coffee.

‘Despite the way the tables were laid there was no menu for afternoon tea or even cakes. The only food on offer was sandwiches on ‘nice’ bread but no price list.

‘The coffee arrived in a “silver” pot. It was really strong.

‘Unfortunately there was so little space on the table because of all the cutlery and crockery that I accidentally knocked over the sugar bowl. When I bent down to pick the cubes off the floor I was horrified to see the floor was filthy dirty.

‘We couldn’t get out of there fast enough. How on earth does a place like that keep its licence? It was really a weird experience and we certainly wouldn’t ever go back. No wonder we were he only people there.

‘Would DEFINITELY not recommend this place.’

The tearoom owner stormed: ‘We are closed from 1st Oct till 1 April 2020 namely the Tearoom. How did you manage to enter the Tearoom? We have a Grading of 5 from the Council and therefore we do not appreciate your comments at all.

‘The Tearoom will be open from 1st April 2020 to Visitors from Cumbria, Lancashire, Yorkshire, Liverpool, Manchester also members of the National Trust, English Trust, Constitutional Monarchy Association and of course Visitors with their Dogs.

‘We are very Dog Friendly. Negative minded Visitors should refrain from entering our Tearoom with a view to posting damaging comments on line!’

A post by ‘Barry M’ from June read: ‘Ordered ham sandwiches and coffee for two…couldn’t see a price list anywhere.

‘The food apparently had to be sent out for and, to my knowledge was not made on the premises..rather strange, I thought.

‘Anyway, to cut a long story short, our order arrived rather too promptly for it to have been made there and then. Two slices of brown bread with ham, a few crisps and a pot of coffee for two – nice enough.

‘But when we received the bill, we were flabbergasted….. £20!!!!! We could have gone to a restaurant and had a meal each for that!! We definitely won’t be patronising this place again in a hurry!!!’

Daniel responded ‘What a Load of Pure Rubbish!

‘Why do people visit a Tearoom to cause trouble? We have been here for Ten Years this Year and over and over we get a few nasty visitors looking for trouble.

‘I go out of my way to help each visitor and how do these people respond well by causing trouble. Anglesey County Council have recently awarded us 5 Star Grading.

‘Listen here you we know who you are we have CCTV Recording here so don’t bother coming here again because you are banned for life.’

And last May, ‘Daniel’ took umbrage with a ‘Ms Geezlouise’ who moaned about hygiene standards, saying: ‘What a Load of Pure Rubbish. The Hot Water Heater was broken and therefore we couldn’t Provide any Sandwiches!

‘I remember the lady coming in looking for a Toilet. I tried to help her and pointed her to our Toilet Facility for Customers only!

‘As soon as this woman had been and used our Toilet she made a flit!

‘People like this should be banned from abusing our Services and then writing horrible comments on this site.

‘I have CCTV Footage of this woman and know who she is!

‘She is BANNED for ever from visiting our Tearoom.’

Many reviews were from people very happy with the service they had received, with several awarding five star scores.

One from April said: ‘We had tea and a large plate of delicious beef sandwiches and crisps. The service was spot on and very friendly towards us both and our dog.

‘Also was given the added bonus of two slices of Bara Braith on our departure.’

Another described it as: ‘class, giving the business a top rating.

‘Seldom have we enjoyed such an interesting afternoon as when we entered the Oriel Daniel Tearoom in Llangefni and met mine Host’.

The tearoom has an overall TripAdvisor rating of 3.5 out of 5, based on 31 reviews.