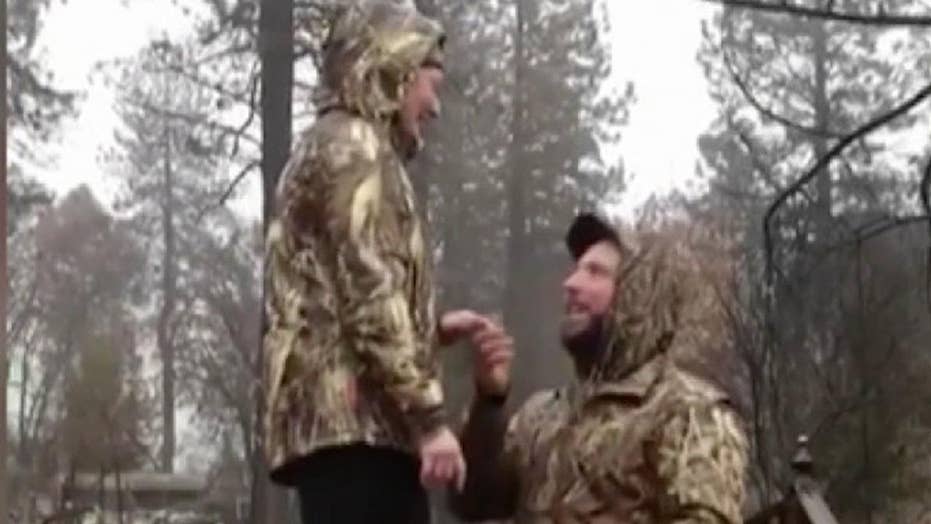 On the doorstep of where their home once stood, a man proposed to his girlfriend on Sunday after California's deadly Camp Fire destroyed their house in Paradise.

Lukas Schnoor, 27, "kept a special promise" on Sunday when he asked 24-year-old Cassie Oxley to marry him. He wrote on Facebook that he prayed to God and asked him to bring Oxley back to him following the blaze that killed at least 86 people in November.

"I told him I had no place to ask for favors but that I knew cassies love and faith in him, I asked him to find the strength to make it back to me," he wrote. "I promised him if she made it back in my arms that his job is complete and I will take care of her for the rest of my life."

Oxley, in a video posted online, cried as Schnoor popped the question. As the two stood on what is literally the remainder of their house, they emotionally embraced one another as Oxley asked the person filming: "Did you know about this?!"

Oxley — who moved into the home a few months after their first date eight months ago — told KATU she "couldn't imagine a day without [Schnoor] anymore," adding the home's destruction has brought the two closer.

After the Camp Fire burned down their house, the two said they realized they needed one another. Schnoor said the inferno "[has created] more growth between us with the stress and tension," and that they've "had each other to fall back on."

Oxley and Schnoor are reportedly staying with loved ones as they decide whether to rebuild a home in Paradise.

UK's Labour not ruling out another Scottish independence vote

Generation cocaine: One in ten teenagers has tried hard drugs