Flying across the sand like a four-wheel rocket, the first fibreglass dune buggy was sleek, stylish and a little whimsical, a small car with big wheels and a tangerine-red paint job. Christened the Meyers Manx, the vehicle was the invention of Bruce Meyers, a surfer and boatbuilder who melded old Volkswagen Beetle parts with a fibreglass body. 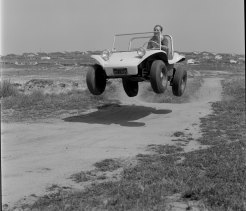 Bruce Meyers, circa 1966, in one of his Meyers Manx dune buggies. Credit:Getty

“It’s sort of a reflection of my lifestyle, which is all about being free,” said Mr Meyers, who made the front fenders flat enough to hold a couple of beers, kept the car’s sides high enough to shield the driver’s eyes from mud and sand, and designed the vehicle so a surfboard could be easily tied overhead.

Built in 1964, his Manx was far from the first car to race across the beach or desert. But the two-seater inspired thousands of imitators, turned the dune buggy into an emblem of 1960s California cool and helped spur the development of off-road racing.

Through his B.F. Meyers & Co, which shut down in 1971, Meyers built about 7000 dune buggies, which were sold as kits and originally priced at $US985. The vehicle inspired more than 250,000 copycats, according to the Historic Vehicle Association, which calls the Meyers Manx “the most replicated car in history”.

Meyers was 37 when he started sketching his idea for the Manx, working out of his Newport Beach garage in Southern California. By then, he had shaped surfboards, built catamarans, survived a kamikaze attack in the US Navy, studied fine art and built a trading post on a coral atoll in the South Pacific. Surfing by day, playing the guitar at bars by night, he was hoping the car would be something he and his friends could use to access remote beaches in Baja.

Meyers died on Febuary 19 at his San Diego-area home, his wife, Winnie Meyers, said on Friday. He was 94.

“I wasn’t thinking about buggies,” he told Autoweek in 2002. “I just thought, ‘What is something that would work well down there that’s cheap to drive?’ ”

During a 1963 trip to Pismo Beach, he marvelled at a group of “water pumpers”, early dune buggies made from stripped-down cars. One of them, a modified Beetle, manoeuvred better than the others, inspiring him to incorporate the car’s engine, suspension and mechanical components into the Manx.

Mr Meyers modified the mechanical components to make the vehicle lighter and faster. Drawing on his boatbuilding experience, he built a thick fibreglass body strengthened by steel tubes, later boasting that the vehicle’s shape was as distinctive as that of a Coke bottle.

“If I’d known a lot about car design,” he added, “there wouldn’t be a dune buggy because I broke the rules. You have to have freedom to break rules.”

The youngest of five children, Bruce Franklin Meyers was born on March 12, 1926, on his family’s dining room table in Los Angeles. His father, a businessman and riding mechanic, was friends with Henry Ford, who hired him to set up Ford dealerships across the country. His mother was a song plugger.

Mr Meyers spent much of his childhood on beaches in and around Los Angeles, becoming a lifeguard after one of his brothers drowned.

Mr Meyers filed a patent for his “sand vehicle” in 1965 but struggled to prevent competitors from using his design, which came to include the shortened chassis of a Beetle. After taking a copycat manufacturer to court in 1970, he lost the case.

“I felt terrible and cheated,” he later told The National, an Abu Dhabi newspaper.

In addition to his wife, Meyers is survived by a daughter, Julie Meyers of Colorado. Two children, Georgia and Tim, preceded him in death.