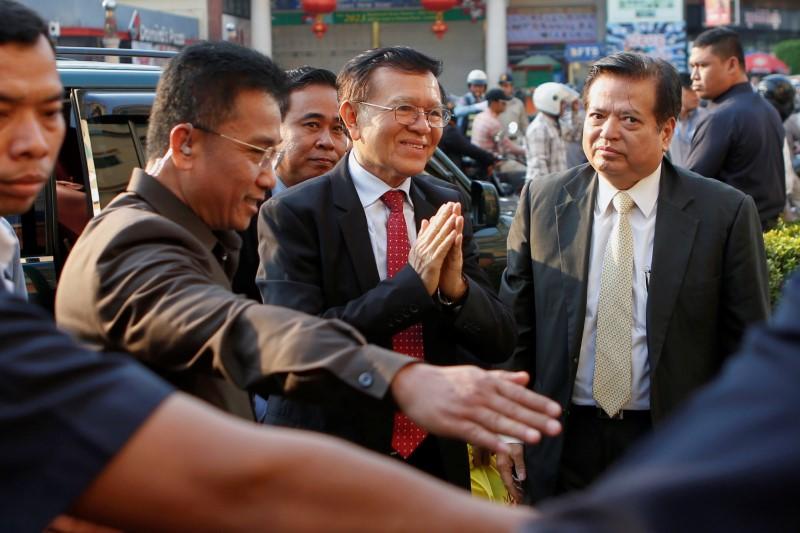 Kem Sokha was arrested in 2017 and his party banned in a crackdown by Hun Sen on opposition, civil society groups and the media in the run-up to the 2018 parliamentary election, in which the ruling party won every seat.

Sokha, 66, is on trial on charges of treason, accused of having conspired with the United States to topple Hun Sen. He denies the charges, calling them politically motivated. If convicted, Sokha would face up to 30 years in prison.

Some reporters were allowed to view trial proceedings on Wednesday after being barred from sessions last week.

In the video, which runs for over an hour and was submitted as evidence by Sokha himself, the defendant said he had received advice and financing from unidentified Americans to support ways of fostering democracy and human rights in Cambodia.

“I rented a radio station, America let me rent a radio station…to educate people at the grassroots,” Sokha said in the video, citing a station owned by local former opposition politician Mam Sonando.

“I…brought him $50,000 of U.S. money for him to set up the radio, making its signal stronger (so as to) air my speeches every day from public forums,” Sokha said.

He denied any intent to seek change through violence in Cambodia, which suffered bloody upheaval in which some two million people died under the brutal Maoist Khmer Rouge regime during the 1970s.

“Do we want Khmer blood to flow again? The answer is no, we don’t want (that),” Sokha said in the video. “We, the National Rescue Party, absolutely do not use violence. Anyone who wants to use violence or force…, we do not do it because I regret Khmer blood, I do not want to do (that).”

A spokesperson at U.S. Embassy in Phnom Penh did not immediately respond to a request for comment on Wednesday.

Hun Sen himself is a former Khmer Rouge guerrilla who defected to the regime’s eventual conquerors, Vietnam, and he has been in power since the mid-1980s. Hun Sen has cast his crackdown on opposition as vital to preserve law and order.

New Coronavirus strain has spread to Scotland and Wales too