A canoeist has become an overnight hero after live streaming his rescue of three turtles seemingly doomed to die after getting caught up in fishing nets off the coast of Brazil.

Rodrigo Oliveira filmed the moment he came across the frantic animals trapped in nets 300 metres long as his went for an early morning row in the Sao Vicente sea off the coast of Sao Paulo on Saturday.

Angered by what he saw, the 42 year old businessman, stopped paddling and hauled the distressed creatures out of the water. All three were found helplessly snarled up in the underwater gear and sinking further beneath the surface as they fought to break free.

The animals would have most certainly drowned as they became increasingly weaker and unable to rise back up for air.

The video, which was over four minutes long, showed the determined seafarer using his bare hands to untangle and rip away the lines – with some difficulty. The mesh was caught in the turtles’ beaks, wrapped around their flippers and slicing between gaps in their shells.

As he pulled off the netting, the Good Samaritan gently reassured the sea reptiles telling each one to stay ‘calm’ because he was there to help them. 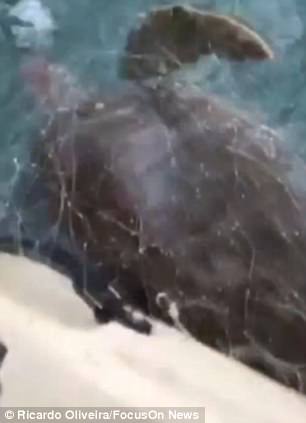 Helpless: The footage shows the animals tangled up in plastic net in the water before being scooped up by Oliveira while he was out for an early morning row

And he berated the fishermen calling them ‘cowards’ for their irresponsible and ‘inhumane’ practices that endangered the creatures’ lives. He spent nearly ten minutes freeing all the exhausted animals.

‘I was on my way back to land after going for a two hour trip starting around 6 o’clock in the morning when something caught my eye,’ he explained.

‘When I looked, I realised there were three turtles floundering underneath the water that were completely twisted up in the nets,’ he said to G1.

‘It was hard to stay balanced while untangling the knotted lines in the middle of the sea. They live in the wild and are not used to being held and they became even more agitated. I wished at that point I’d brought a knife to cut through the mesh quickly.’ 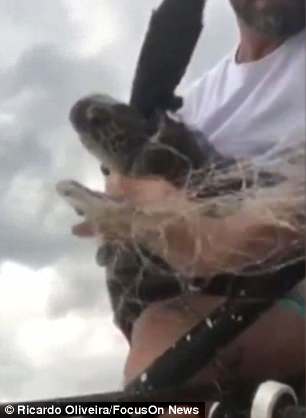 Heartbreaking: Ricardo wanted to live stream the moment in a bid to raise awareness and to ‘prick the consciences of fishermen who leave their nets in the sea overnight

After freeing the first one he paddled around to save the second. The third was also successfully released but this rescue was not caught on camera.

The company boss said he decided to live stream the incident in a bid to ‘prick the consciences’ of the fisherman who leave their nets out at the sea overnight.

‘They usually cast their nets close to the rocks where the turtles feed. This means a lot get stuck in the gear and end up dying. This has happened many times. Their actions are inhumane and cowardly because they take no notice of the consequences of their selfish behaviour,’ he added (to FocusOn News).

He said by live streaming he wanted people to feel the ‘immediacy’ of the heartbreaking moment and he hoped to ‘raise awareness’ through friends who would share and publicise the incident. 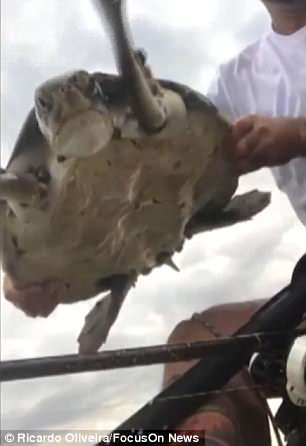 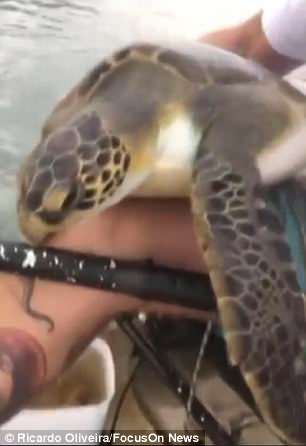 Lucky: He was bale to rescue the three turtle but only two were caught on camera. According to the Gremar Institute, 511 turtles were found dead in 2017 on the Sao Paulo coast

The broadcast via Facebook went beyond his expectations racking up thousands of shares and receiving scores of comments with many calling him a ‘hero’ and a ‘guardian angel’ while congratulating his single-handed and determined efforts.

‘I never expected to receive so much support. The repercussions have been amazing and I’m very happy,’ a proud Mr Oliveira said.

‘It was lucky I went out to paddle early and found them. I feel blessed to have been able to help them.

‘If they had stayed a few hours longer they would have drowned because they need to rise to the surface to get oxygen,’ he continued adding he had alerted the environmental military police about the incident.

A spokesperson for the agency said there was ‘no vessel available to attend the scene at the time we were called. Agents drove to the area afterwards and found that a civilian had already released the turtles and a vessel was no longer required.’

According to the Gremar Institute, responsible for the rescue and rehabilitation of marine animals, 511 turtles were found dead in 2017 on the Sao Paulo coast and since the beginning of this year 172 turtles have died resulting from man-made causes.

Some suffered internal injuries from swallowing hooks, others had become entangled in nets leading to strangulation or drowning and the amputation of their limbs and quite a few had ingested litter and plastic bags.

Which Salt-N-Pepa Member Has the Highest Net Worth?