Johannesburg: A wildfire raging on the slopes of Cape Town’s Table Mountain spread to the University of Cape Town, burning the historic campus library and forcing the evacuation of students.

Orange flames lit up the windows of the library that houses considerable archives and book collections on Sunday while firefighters sprayed jets of water to douse the blaze. 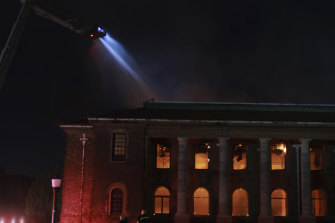 Firefighters work to douse the flames engulfing Jagger Library at the University of Cape Town.Credit:AP

At least two floors of Jagger Library, which houses priceless African-studies collections, including unique manuscripts and personal papers, were burnt.

Other campus buildings also caught fire, and a historic windmill nearby was also burnt.

Just off campus, on the slopes of Table Mountain, wind spread the flames across dry brush, and part of the Rhodes Memorial Restaurant caught fire, Cape Town media reported.

More than 100 firefighters and emergency personnel were deployed to the university campus and to Table Mountain National Park. Four helicopters were used to drop water on threatened areas, officials said. 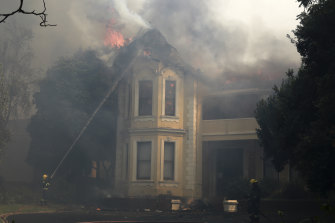 Firefighters work to douse a burning building at the University of Cape Town on Sunday.Credit:AP

Heavy smoke engulfing the area forced the closure of a major highway and other nearby roads, as well as the evacuation of hikers on the mountain and in the park, the nearby Kirstenbosch National Botanical Garden and hundreds of students living on campus.

More than 200 firefighters and emergency personnel supported by four helicopters and a spotter aircraft battled the blaze, which continued to burn late on Sunday. Three firefighters were taken to hospital with serious burns, J.P. Smith, a security official, said.

Windy conditions, a regular weather feature on the Cape Peninsula, caused the fire to spread and cross the M3 highway, which connects downtown Cape Town to the southern suburbs. 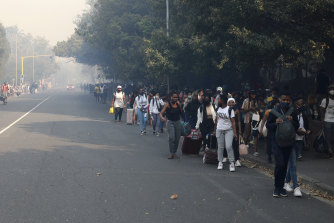 Students are evacuated from their residence at the University of Cape Town.Credit:AP

Cape Town Mayor Dan Plato said the flames damaged the Rhodes Memorial restaurant and South Africa’s oldest working windmill, Mostert’s Mill, which was built in 1796 and is a well-known landmark on the M3 near the campus.

The windmill’s thatched roof and four-bladed sails went up in flames as onlookers watched helplessly.

“It is tragic that literary treasures have been lost at UCT library, but I have been informed that some of the most valuable works were saved by the quick activation of roller doors,” Plato said. 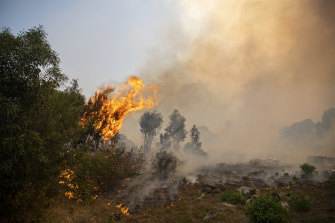 A fire rages out of control on the slopes of Table Mountain on Sunday.Credit:AP

Thick smoke filled surrounding suburbs and drifted across the city throughout the day.

Wildfires are a common occurrence in the national park lands that make up the heart of Cape Town, with high temperatures and stiff winds contributing to the rapid spread of the fire.

Nearby residents were cautioned to be on alert, Charlotte Powell, spokeswoman for the city’s disaster risk management centre, said in a statement.

“At this stage, there’s no cause to evacuate, but we ask that residents adhere to the following: close all windows to prevent draft and reduce heat, damp down your garden using a hose or irrigation system,” Powell said.

Who is Amrita Acharia? Dr Ruby Walker actress in Good Karma Hospital and Irri from Game of Thrones