Washington: The US House committee investigating the January 6 attack on the Capitol has abruptly scheduled a hearing for Tuesday to hear what the panel called “recently obtained evidence” and take witness testimony, a surprise move that touched off a wave of speculation about a potential explosive revelation. 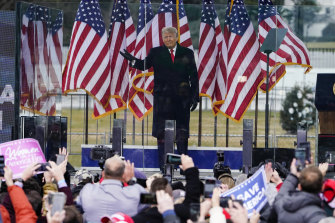 Donald Trump speaks to supporters just before the US Capitol riots.Credit:AP

The hearing is scheduled for 1pm Washington time (Wednesday AEST) on Capitol Hill, according to a news release issued by the committee, in which it provided no other details about the session. The announcement — and its sudden and secretive nature — gave way to a day of guesswork about what the panel might have learnt, or whose cooperation it may have secured, to warrant upending a carefully choreographed hearing schedule during a week when members had left Washington to spend time in their districts around the country.

“BETTER BE A BIG DEAL,” John Dean, the White House counsel under former president Richard Nixon known for his role in the Watergate scandal, wrote on Twitter. “There was only one surprise witness during the Senate Watergate Committee hearings. On July 16, 1973 an unannounced witness appeared: Alex Butterfield, who testified to Nixon’s secret taping system — forever changing history!”

The January 6 investigation panel has held a series of hearings this month laying out the findings of its nearly year-long investigation, but it had not been scheduled to have any additional sessions until July.

Still, its investigators have continued to gather evidence and record interviews with witnesses even as the committee presents its findings. At the end of each hearing, legislators have issued calls for more people to come forward and offer public testimony. And recently, the committee has indicated that it has gathered crucial new information that bears further exploration.

One key witness the committee has yet to hear from publicly is Cassidy Hutchinson, a former aide to Mark Meadows, the final White House chief of staff to former president Donald Trump.

Hutchinson has provided the panel with some of its biggest revelations to date, all made during videotaped closed-door testimony, portions of which have been shown or alluded to in previous hearings. She is said to have been present when Meadows described hearing Trump react approvingly to chants by his supporters to hang then vice president Mike Pence. And she testified that a half-dozen Republican legislators who led the efforts in Congress to overturn the election sought pardons after the riot.

In another potential blow for Trump, his social media company’s public listing became more complicated on Monday when the cash-rich shell company merging with his company disclosed it and its directors are the subject of federal grand jury subpoenas.

The disclosure by Digital World is the first indication that federal prosecutors in Manhattan have joined in the scrutiny of the merger between Digital World and Trump Media, which has been under investigation by financial regulators for months. The investigation threatens to further delay the completion of the merger, which would provide Trump’s company and its social media platform, Truth Social, with up to $US1.3 billion ($1.8 billion) in capital, in addition to a stock market listing.

The Bridge season 2 location: Where was the Channel 4 series filmed?

Google Maps has been overtaken as Waze receives another new feature

Paralysed mother, 79, survives being ‘buried alive in abandoned tomb by son’ after being trapped for three days – The Sun