Now THAT’S making an arrival! Shocking moment high-speed ‘impaired driver’ crashes through the wall of a Florida airport terminal and into baggage claim but miraculously no one was hurt

Shocking footage shows the moment a suspected impaired driver crashed his truck through the wall of a Florida airport and into baggage claim after losing control on the highway.

Juan Monsivis, 40, went through a chain-link fence line along a boundary of Sarasota-Bradenton airport, crossed the air carrier ramp at 100mph and smashed through the cinder block wall around 3.15am Thursday.

Miraculously no one was hurt as the 2015 GMC Sierra came to dramatic stop when it hit the counter shared by Alamo Rent-a-Car National Car Rental counter where two employees stood nearby.

The final flight of the night had landed 20 minutes before the crash and the area was almost clear when Monsivis ‘blasted a big hole’ while moving at a ‘high rate of speed’, airport CEO Rick Piccolo said. 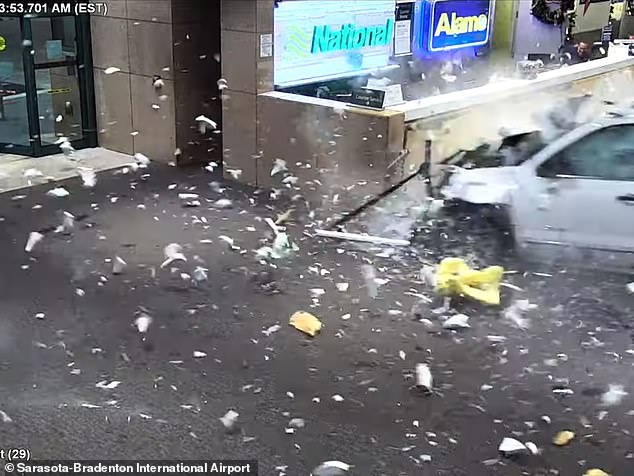 ‘We actually had a late flight, but no one else was here in the baggage claim area except a couple of workers,’ Piccolo explained to Fox 13. ‘If this happened during the day, it would’ve been a much different story.’

The smash began with him driving north in a ‘reckless manner’ on the US 41 according to New College Police.

Police had tried to stop him but couldn’t catch up.

Monsivis turned east and smashed through a cross link fence on the western boundary of the airport before entering the utility road and crashing into the terminal.

According to surveillance footage, he entered airport grounds around 2.51am and police were called to dispatch four minutes later. Juan Monsivis, 40, drove through a fence line along the western boundary of Sarasota-Bradenton airport around 3.15am Thursday

‘It’s amazing no one was hurt,’ Trooper Kenn Watson said after the incident at SRQ which broke passenger traffic records with a 52 percent increase last month compared to the same time last year.

A whopping 182,607 people passed through the airport where Sun Country launched non-stop flights to.

Monsivis, however, was transported to Sarasota Memorial Hospital with serious injuries.

The driver caused major damage to ceilings, doors and walls, estimated to be cost around $250,000 to repair.

Conveyor belts were also wrecked in the incident but the airport worked to make them available to travelers landing Thursday.

Only one of three remained out of use and needs to be replaced but the airport CEO said it’s ‘a very busy time of the year’ and that it was ‘going to be our busiest week’.

‘There was property damage caused early this morning by a suspected impaired driver. Regular operations continue as we work closely with authorities,’ the airport posted on Facebook Thursday. 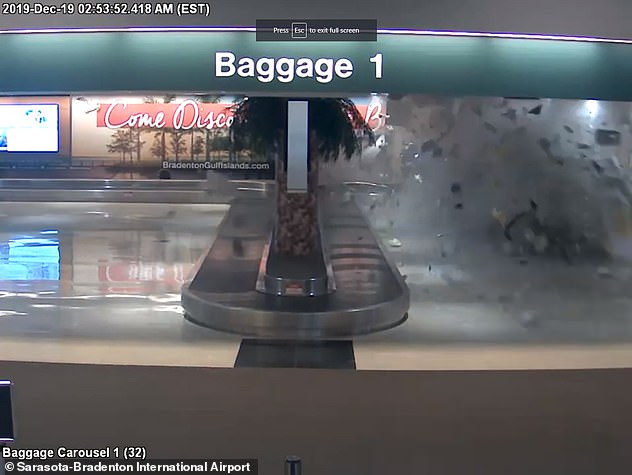 It’s not the first time an impaired driver has caused damage at the airport.

Last November, a driver went through two gates before colliding with a small plane in the general aviation area.

But there are no plans to step up safety and security measures.

‘It was such an unusual incident and the truck came through a concrete block wall,’ Rick Piccolo, airport president and CEO, said.

Monsivis has multiple DUIs on his record as well as counts for driving with his license suspended or canceled, and hit-and-run with property damage.

Others include charges of unlawfully carrying a concealed firearm, battery of a law enforcement officer, resisting arrest with violence and possession of synthetic marijuana. 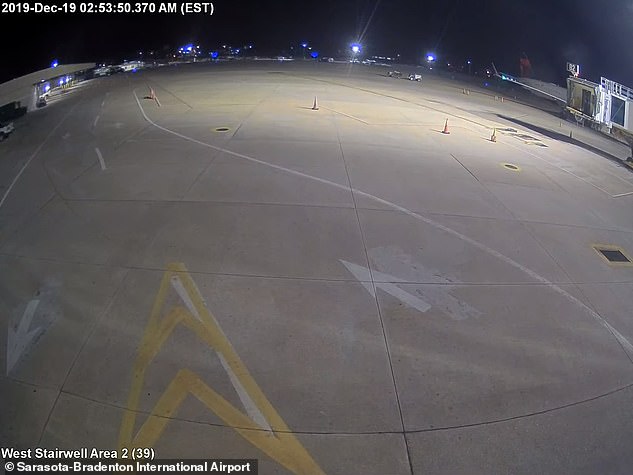 A 'Candyman' Remake Could Be Coming From Jordan Peele

Jimmy Kimmel Unveils Kanye and Trump Highlight Reel: ‘Trump Is Sitting Across From His Own Twitter Account Come to Life’