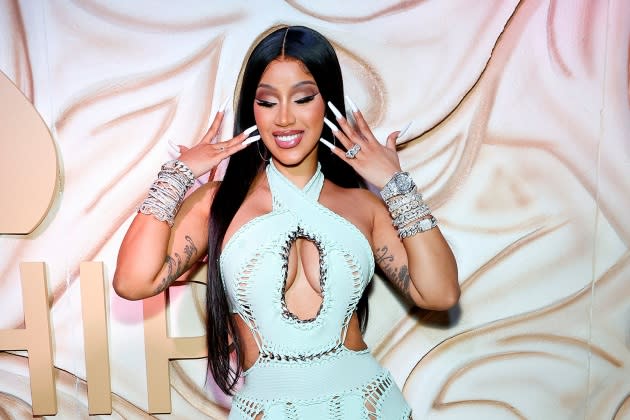 Cardi B is the diaper whisperer in a new video the “Up” rapper posted after her fellow MC Kash Doll asked the urgent question, “Aye Bardi how the hell u change wav diaper with the nails? Lol i got on press ons struggling.”

Mother of two Cardi was more than happy to help, responding, “Okay girl sooo I just made a whole video [crying laughing emoji] Trust me you will get the hang of it!” She did add, however, one very important caveat: “I do feel like boys are harder to clean, they got more crevices.”

In the tutorial posted on Tuesday (May 17), Cardi, 29, unsnapped a onesie on a teddy bear with her stiletto-heel shaped red nails, revealing the diaper below. The first step, she said, in case there’s “too much poop,” is to use the diaper to wipe “all the way down” and make sure you really clean the butt cheeks well.

At one point her 3-year-old daughter Kulture walks in and asks, “Mommy… why are you cleaning the butt?” Cardi laughs and says, “it’s a long story.” Reminding viewers that boys have “more crevices than girls,” she demonstrates the proper wiping action as Kulture plops down to watch. Once everything is clean, Cardi grabs the new diaper and “woop, woop, woop, woop, woop” tapes it on nice and tight with no problem, admitting that the part she hates the most is snapping the onesie into place with her fashion talons.

“I don’t know if it’s because I’ve got two kids and I could probably do it a little faster,” she said. “Probably because I’ve been wearing nails this long since I was 19.”

The rapper had some more knowledge to drop on Tuesday, reacting to fans’ complaints that her new music is not coming fast enough. “I seen a lot of y’all talking sh– like, ‘Oh she doesn’t feed us…,’” she said in a voice note recorded for the Bardi Gang. “So when I put what I’mma put out, I’mma talk more about it because clearly I can’t talk about it now. But I really had technical difficulties with my latest project. I had not one, not two, but like three technical difficulties on the music that I’ve been working on that … had to be done and taken care of before I put it out.”

It’s been more than four years since Cardi released her debut album, Invasion of Privacy, which became the first album by a female rapper to be nominated for album of the year at the Grammy Awards since 2003; it won the golden gramophone for best rap album. Cardi’s most recent single was her Feb. 2021 Billboard Hot 100 No. 1 hit “Up.”

Check out the video tutorial below.

Okay girl sooo I just made a whole video 🤣😂😂Trust me you will get the hang of it! However I do feel like boys are harder to clean,they got more crevices. https://t.co/b2CeTstz1L pic.twitter.com/80PEcWlMIJ

The Handmaid’s Tale season 4: Will Gilead be wiped out in nuclear disaster?