This is the shocking moment thieves use an electric saw to steal a catalytic converter from a car in broad daylight before giving the middle finger to an onlooker.

The masked duo were caught on camera lifting up a parked silver Honda Jazz with a jack before cutting out the converter in a quiet residential road in Stoneygate, Leicester, on Monday.

One of the thugs then sought to intimidate a member of the public filming the theft by staring them down and making obscene gestures before fleeing in a grey Volvo estate at around 11.45am.

The exhaust appears to have been taken for its catalytic converter, which contains several precious metals that can be resold for hundreds of pounds. 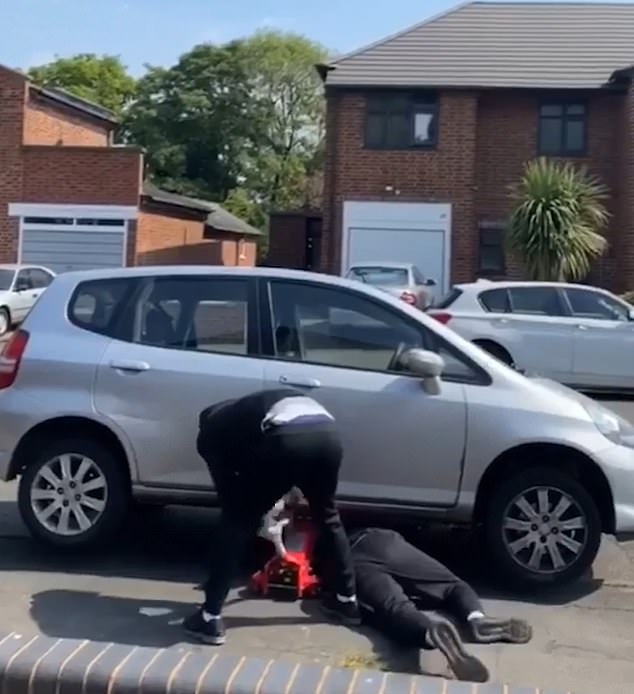 The masked duo use a jack to lift a silver Honda Jazz before cutting out the catalytic converter in a quiet residential street in Stoneygate, Leicester, on Monday 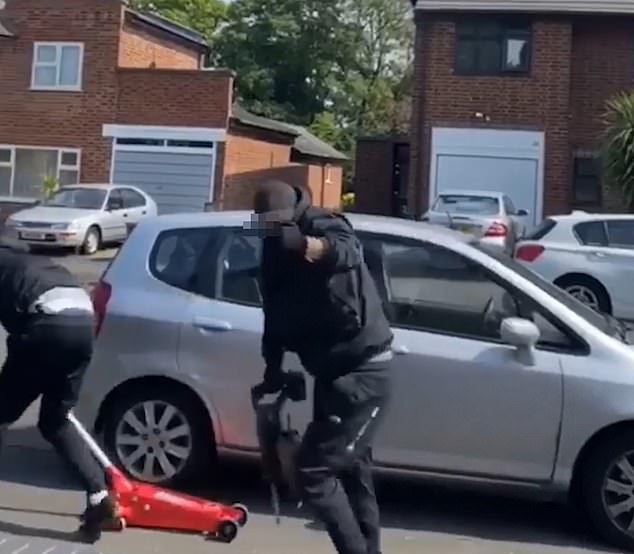 One of the thugs gives the middle finger to an eyewitness during the theft. The exhaust appears to have been taken for its catalytic converter, which contains several precious metals that can be resold for hundreds of pounds 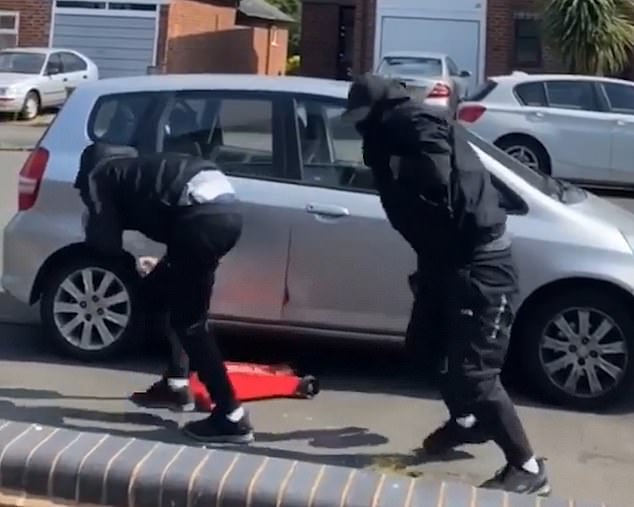 Footage of the raid was shared anonymously on social media yesterday and has been viewed more than 15,000 times.

It shows one of the men using a jack to lift up the side of the silver car while an accomplice slides underneath the vehicle with a reciprocating saw.

He uses it to remove the exhaust from the undercarriage and slides out with the converter in less than 20 seconds.

The masked thug then turns to look at the person filming – who remains silent throughout – and sticks his middle finger up at the camera as he carries the stolen exhaust into a parked getaway car.

The other two crooks calmly put the jack back in the boot and flee with their accomplice in the vehicle.

Viewers on social media criticised the person filming for not doing more to stop them.

Idriz Ali wrote: ‘We live in a society where people just watch and record.’ 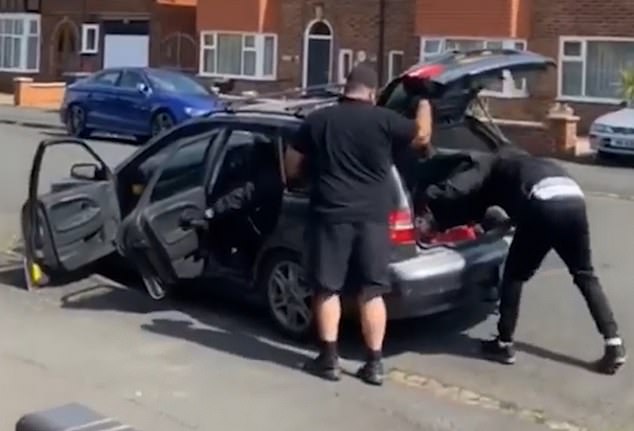 The duo, aided by a third man, then put the stolen item in the boot of a grey Volvo estate before fleeing the scene

Claire Curtis said: ‘They were just filmed and allowed to get away. I would have smashed their windows in.’

But Glenn Harris argued: ‘That’s right, you risk your life for £150, off you go. Look at them, they’re scum. They wouldn’t think twice about kicking the s*** out of you if you tried to intervene.’

Catalytic converter theft in the UK is soaring as criminals cash in on a boom in precious metal prices.

These metals – platinum, palladium and rhodium – are used in converters to capture noxious gases as they flow through a vehicle’s exhaust system.

Hondas and Toyotas are some of the most common vehicles targeted and hospitals and supermarket car parks in particular have become notorious hunting grounds for thieves.

The stolen devices are sold to unscrupulous scrap metal dealers for hundreds of pounds.

The precious metals are then stripped out and sold on for a profit to refineries around the world.

In London alone last year, there were more than 3,000 converter thefts.

A Leicestershire Police spokesman said: ‘Officers are investigating after a catalytic converter was stolen from a Honda Jazz on Monday, August 10.

‘The car was parked in Holmfield Avenue, Leicester, and the incident took place just before 11.45am.

‘Enquiries are ongoing to identify the people in the footage. Anyone with any information is asked to contact 101, quoting crime number 20*414341.’

What are the different types of weather warnings?