The blonde swimsuit-clad pitch invader burst onto the pitch 20 minutes into the all-English final – gaining attention from Spurs and Red players.

The prankster has been revealed as American model Kinsey Wolanski, whose stunt was to promote Youtuber boyfriend Vityaly Zdorovetskiy’s adult website Virtually Uncensored.

The streaker has now trolled England and Tottenham midfielder Winks to the amusement of more than 2 million Instagram fans. 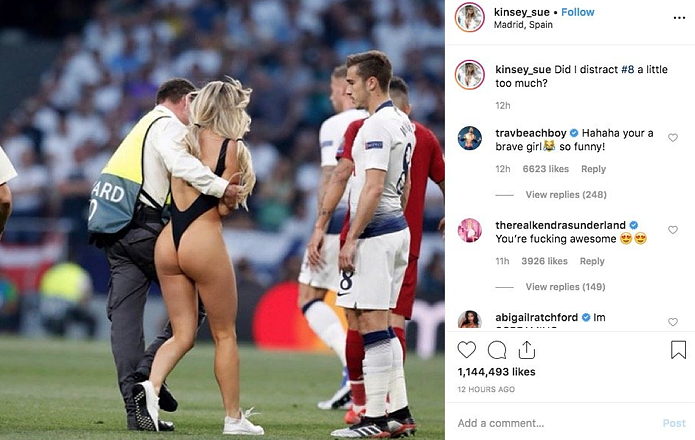 Posting a snap of Winks looking shellshocked as she is dragged by in nothing but a swimsuit, Wolanski joked: “Did I distract number eight a little too much?”

Fans were quick to join in Wolanksi’s joke, with one saying: “Hahaha his face.”

Another chirped: “You were player of the match”. 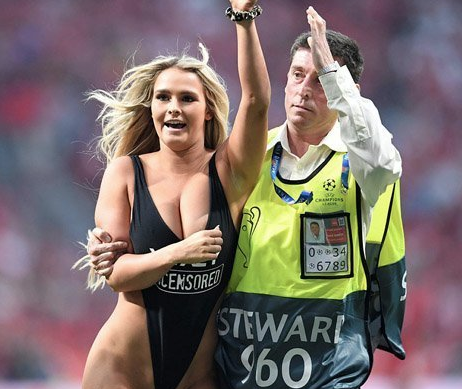 Tottenham were left heartbroken in Madrid as an early penalty from Mo Salah and a Divock Origi strike lead Liverpool to a sixth Champions League trophy.

Fans have flocked to follow Kinsey on social media, with a million people quickly following her.

Life-long spurs fan Harry Winks was a flag bearer in 2010 against Real Madrid before becoming a finalist last night.

Winks said after the match: “So proud of everyone involved with the club last night.

“Always a dream of mine to play in the Champions League final…however It wasn’t our night, but we’ve shown just how far we’ve come and we will continue to build on that next season! Thank you for all your support #COYS”