Philip Hammond is under growing pressure to use this month’s Budget to help save the High Street as stores prepare for another crippling business rates rise.

The total bill for next year’s rates will go up by £728 million at a time when shops are fighting for survival amid an online shopping boom.

The 2.4 per cent increase in the £31 billion bill was calculated after the publication yesterday of the inflation figure for September, which is used to determine April’s business rates rise in England. 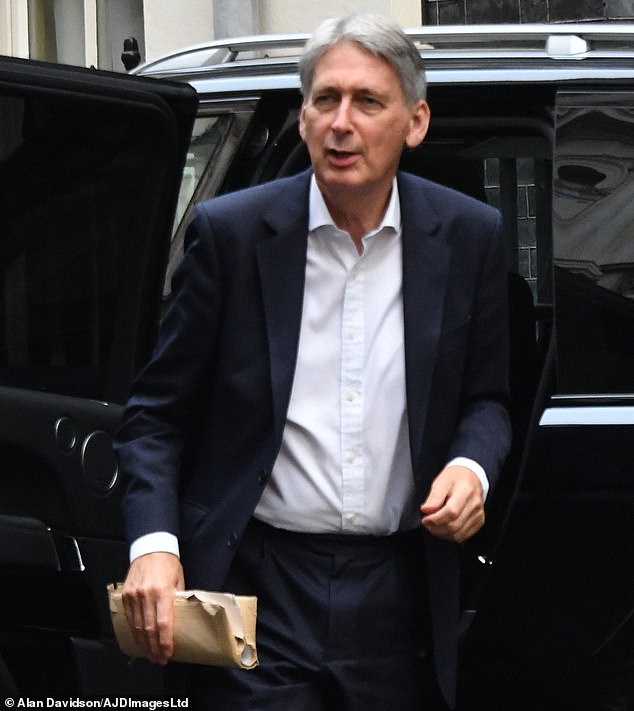 Critics said it was deeply unfair that internet giants such as Amazon and Asos pay very little in business rates because their premises are out-of-town warehouses. 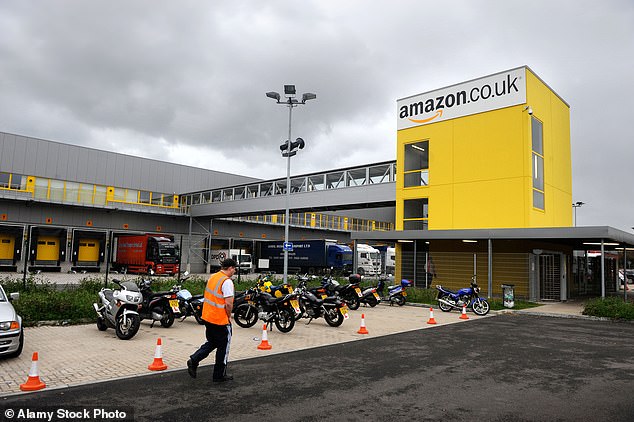 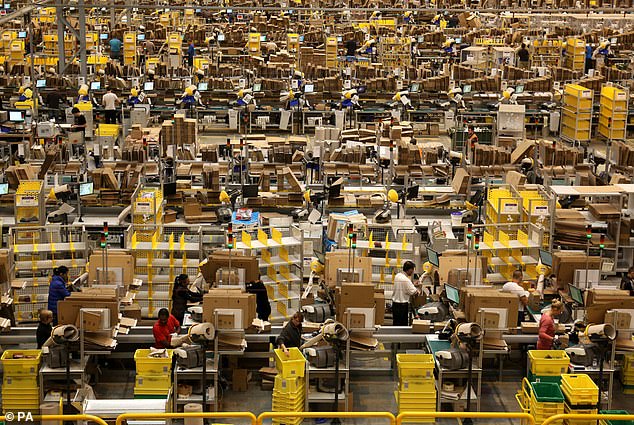 Amazon workers packing orders on the warehouse floor at the Amazon UK Fulfilment Centre in Peterborough, Cambridgeshire. The Chancellor is facing pressure to introduce a so-called ‘Amazon tax’ on the internet giants

The Chancellor is facing pressure to introduce a so-called ‘Amazon tax’ on the internet giants to try to level the playing field, while some have called for a freeze on business rate rises to give struggling high street stores some relief.

Mike Cherry, chairman of the Federation of Small Businesses, said: ‘The Chancellor must provide targeted support to those businesses struggling to keep their heads above water.

It’s vital that businesses are given the right support in the form of a rates freeze from April 2019, when the next inflation-linked rise is due.’

Liberal Democrat leader Sir Vince Cable said: ‘The Chancellor has got to tackle the issue of business rates, which are causing mounting anger, are a tax on business improvement, and create a disadvantage against tax-dodging tech multinationals.’ 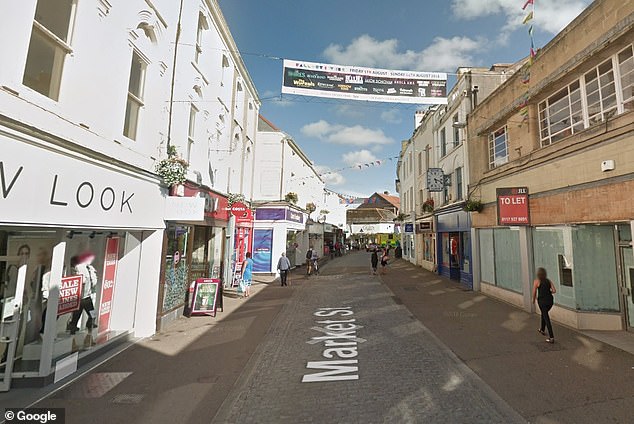 Shadow chancellor John McDonnell demanded a crackdown on tax avoidance by Amazon and other online giants.

‘The current business rates system is crippling Britain’s high streets but Philip Hammond is refusing to do anything about it,’ he said.

‘We need action so jobs and local communities don’t continue to suffer.’

The Mail is campaigning for reforms that will give bricks-and-mortar stores a level playing field with online rivals.

Ministers have been dropping broad hints that Mr Hammond’s Budget at the end of the month will include some reforms to help the High Street. 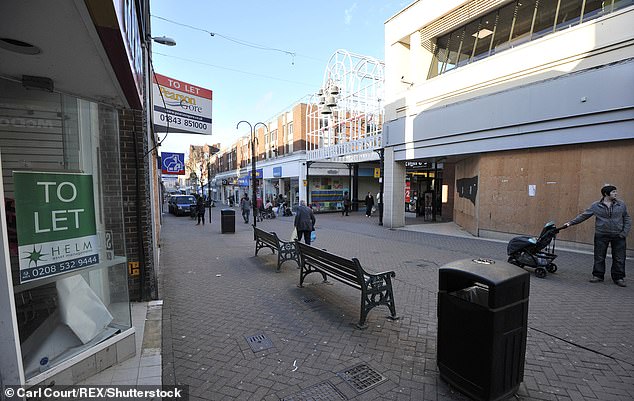 General view of closed-down shops on Margate High Street, Kent, England – the rise will hit stores of all sizes from corner shops to department chains, as well as manufacturers and white-collar firms

The 2.4 per cent rates rise, in line with the September inflation figure, means most companies will have to pay 50.5p in the pound, according to analysis by consultants at Altus Group.

This would be the first time the 50p threshold has been passed since the tax was introduced in 1990. In the retail industry, this could mean the difference between profit and loss.

The rise will hit stores of all sizes from corner shops to department chains, as well as manufacturers and white-collar firms. 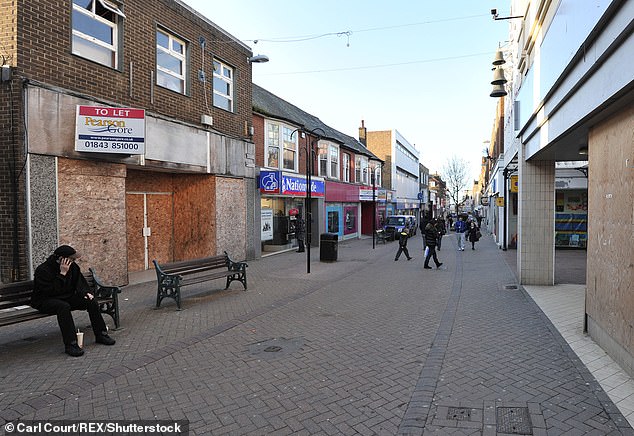 It follows a jump in costs after premises were revalued last year to take account of rising property prices.

Writing for the trade magazine Estates Gazette, he said: ‘While nearly all of our 166 UK stores are profitable today, extrapolate current market trends three to five years forward and that picture is going to change.’

John Webber, of property firm Colliers International, said: ‘Further increases are unsustainable. This could impact decisions to either close or keep open stores.’ 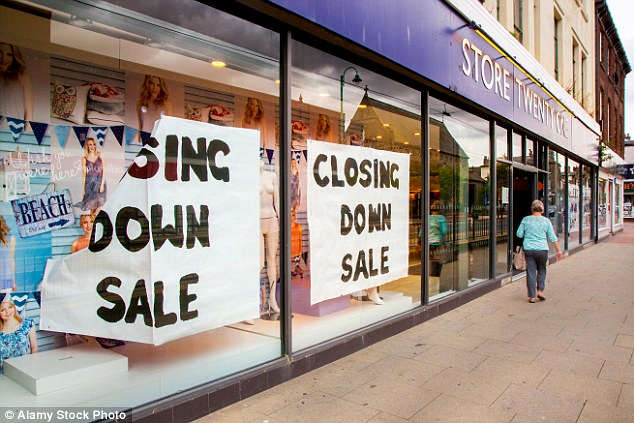 Closing Down Sale posters are seen in shop windows of store Twenty One in Fleetwood, Lancashire

Robert Hayton, of Altus, added: ‘Our high streets are engulfed in crisis. It is time for the Chancellor to take a step back and support business through an unprecedented stimulus by freezing rate rises next April.’

Mr Hammond faced pressure from his own backbenchers last night, with former Tory chairman Grant Shapps saying: ‘After years of struggle, the High Street deserves a boost and there’s no better place to start than ensuring a business rate-friendly Budget.’

Fellow Tory MP Robert Halfon said: ‘The Chancellor must scrap or curtail business rates for independent shops and they should also get tax breaks.’

A spokesman for the Treasury said: ‘We’ve introduced more than £10billion of business rate support to help our high streets, so many bricks-and-mortar businesses now pay no rates at all.

‘We’ve appointed an expert panel of industry leaders… to diagnose the issues affecting our high streets.’

Town centre that struggles… as nearby online fashion giant thrives

A few miles outside the South Yorkshire town centre stands the vast warehouse of the retailer that yesterday announced £2.4billion in revenues.

While small firms on Barnsley’s dying high street have to pay out large proportions of their takings to cover rising business rates, the thriving online retailer paid only £1.1million for its Grimethorpe site where it employs 4,000 staff.

Mark Rayner, manager of Ashworth and Bird men’s clothing shop in Barnsley, said it was impossible to compete with the retail giants: ‘Business is tough, footfall is down and it’s hard to make a profit. 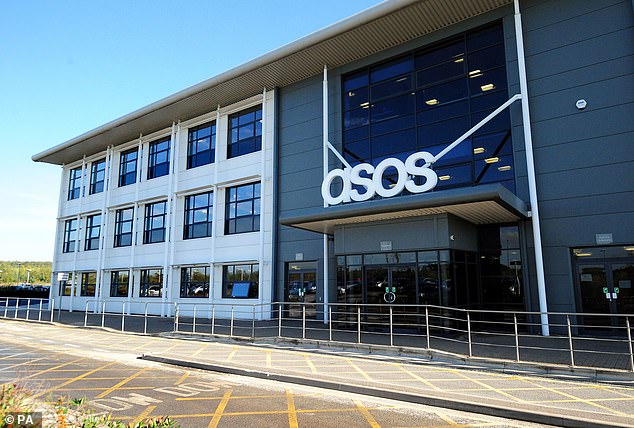 ASOS distribution centre near Barnsley, South Yorkshire as analysts are forecasting underlying pre-tax profits to rising by 20% to £100.3 million for the year to August 31

‘We are having to discount more than ever and start sales earlier and earlier.’

Business rates are calculated on how much it is estimated a premises would cost to rent.

Robert Younger, managing director of Parkway Cinema in Barnsley, said since his company bought the business 11 years ago rates had risen from about £10,000 to £15,000 a year.

He said: ‘It has shot up a lot and it doesn’t help. It’s not only ourselves but shops, cafes and restaurants.

‘It would be good to have some help with the rates. It’s important not to have too many empty shops and to keep the town centre alive.’

Rateable values on many small town centre premises in Barnsley are relatively low. Shopkeepers do not need to pay any business rates on a property with a rateable value of £12,000 or less and there is some rate relief up to £15,000. 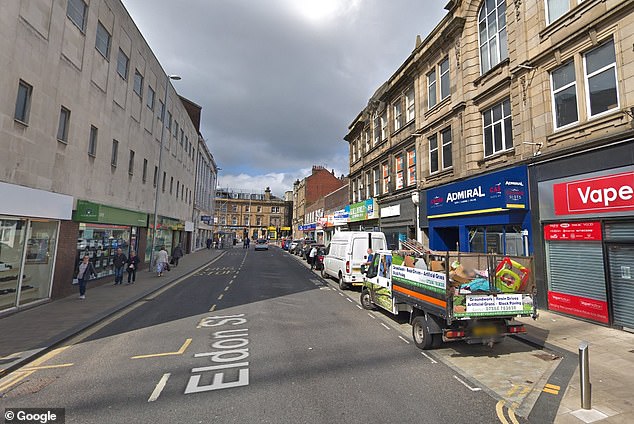 Empty stores in Barnsley, where struggling shopkeepers facing crippling rate hikes yesterday told of their struggle to survive while business is booming for their neighbour – online clothing giant Asos

Yet for Julie and Wayne Chalkley, who run the Sofa and Bed Barn shop, staying open is still a challenge.

They said: ‘Every day the druggies hang around in the alleyway. They are on spice, there’s fighting and all sorts going on.

‘They used to go to Poundworld to rob it but that’s closed now. We’ve got nothing nickable and anyway I talk to them but it does put customers off coming.

‘Little old ladies are terrified. We need to clean this area up. We had a stabbing a few weeks ago near the market.’

Alex Cobham of the Tax Justice Network said: ‘We’re effectively subsidising the likes of Amazon to outcompete shops that create employment on our high streets. We’re undermining our own economy.’

It's Almost Party Season, and These Are the Brands You Need to Pay Attention to

Karl Stefanovic explodes at Qld over disabled boy in quarantine

What’s the secret to saving this rare creature?