Team GB hockey player Shona McCallin was among those returning to Heathrow yesterday and filmed a video showing how most of the Border Force desks were closed while travellers continued to stand in line.

Others said the queues were so bad at Stansted that they missed the last train to London Liverpool Street station and were instead faced with paying £180 for an Uber for what is normally a £55 journey.

Since international travel reopened in May, there have been huge queues at Heathrow, with some passengers reporting three-hour waits at passport gates and the Home Office admitting the situation is ‘unacceptable’.

The Home Office has been contacted by MailOnline today regarding why there were further delays yesterday.

It comes ahead of changes to the travel system in a week’s time on October 4, when a simplified two-tier system will come into force. Countries will be divided into a single red list and a ‘rest of the world’ safe category.

Among those caught up in the Stansted chaos at midnight last night was Ricardo Abreum, chief product officer at payments service ePayments in London, who urged Border Force to ‘please get your s*** together’. 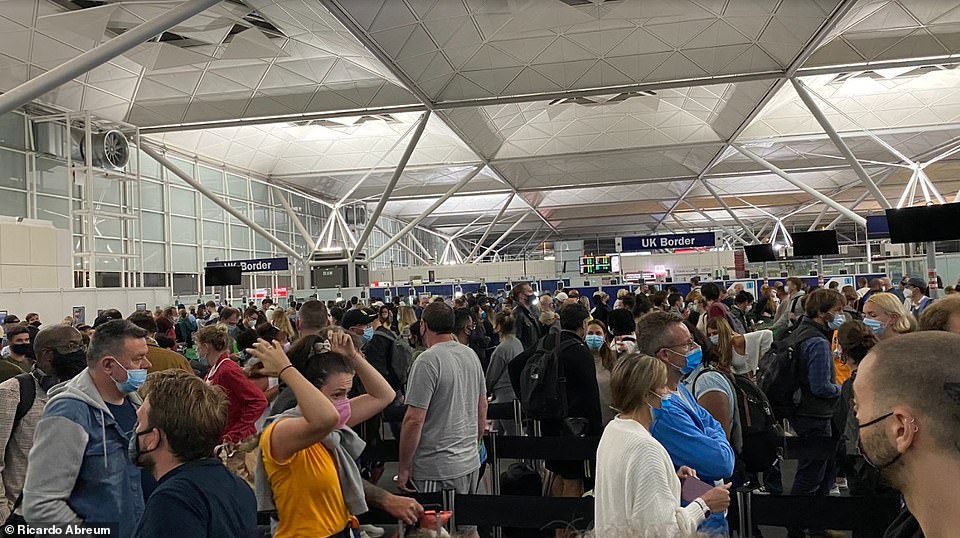 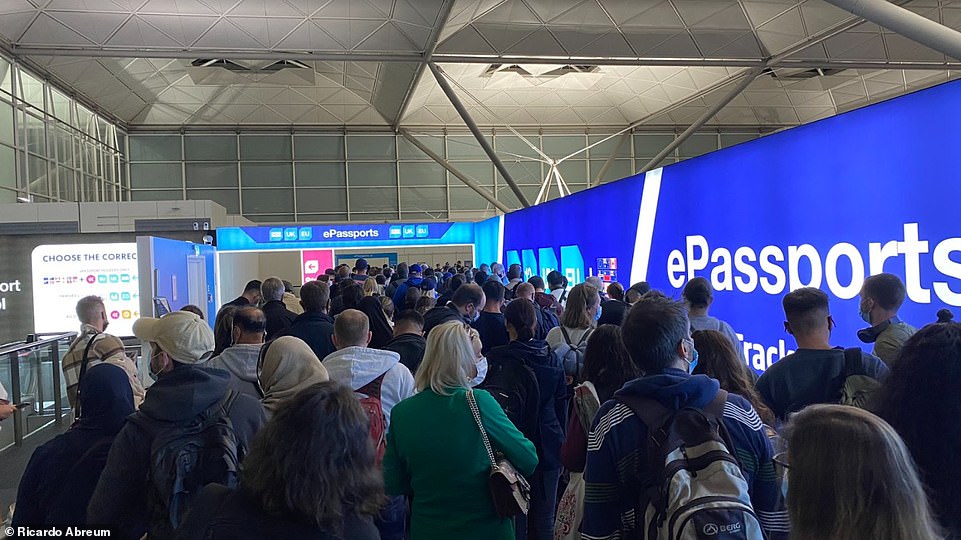 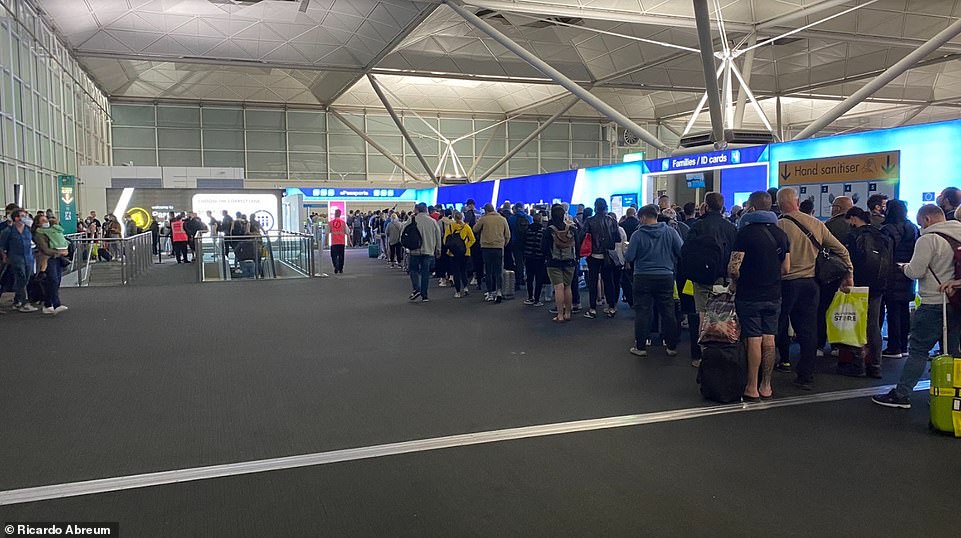 He told MailOnline today: ‘It was a ridiculous situation that happens too often. The flight landed at 11.20pm, I left the airport at 1.30am with a destination of Liverpool Street.

‘At that time and due to border control delays the last train was already long gone. Two options remained; getting in another huge queue to buses or calling an Uber that will charge £180 for what’s usually a £55 journey.

Insulate Britain cause disruption on M25 near Heathrow Airport

Insulate Britain protesters have caused disruption on the M25 for the sixth time in a fortnight despite injunctions which mean they could be jailed.

Activists from the group formed a roadblock on the slip road at junction 14 near Heathrow this morning. A total of 52 protesters arrived at about 8am and were moved to the verge by police. 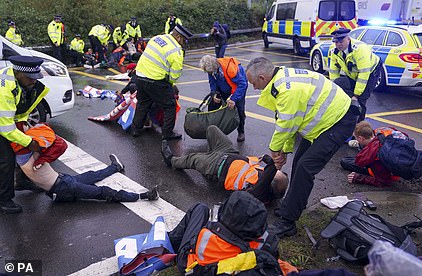 Some glued themselves to each other barriers, and the tarmac, and blue paint was sprayed onto the road. A total of 53 people were arrested.

The group, an offshoot of Extinction Rebellion, is calling for the Government to insulate homes in the UK to help cut carbon emissions.

Their controversial tactics have led to National Highways being granted injunctions to prevent people obstructing the M25 and A20 following further demonstrations at the Port of Dover on Friday.

The injunctions mean demonstrators could face time in prison for blocking the routes. Police have made dozens of arrests since the beginning of the campaign.

‘This whole situation happens too frequently and it’s just poor management and organisation likely hiding with excuses of Covid-19 short of staff.’

Across the capital at Heathrow, Ibrahim Harb, who works in marketing, tweeted a video of huge queues shortly before 2pm yesterday, saying: ‘Unacceptable queuing time in Heathrow. Some passengers have been waiting for six hours.’

And Team GB hockey player Shona McCallin posted a video from Heathrow at 8pm yesterday, saying: ‘Any reason why all the desks are shut when the queue is 40 minutes long?’

It comes after MailOnline revealed yesterday that the recent chaos at Britain’s borders has been driven by ‘nightmare’ changes to guards’ rotas which have forced them to work 12-hour shifts.

An IT failure at Heathrow last Friday caused further problems, with thousands of people forced to wait in queues of up to three hours.

A Border Force official suggested that the problems are at least partly caused by changes to the staff rota which saw shifts extended by two hours in August.

Officers had already had their shift lengths increased to 10 hours and 25 minutes but this was further extended to just over 12 hours, meaning that more staff have suffered from exhaustion and called in sick as a result.

The unnamed staff member told MailOnline: ‘The rotas are a nightmare. They made all officers extend their shifts by two hours. So an already long 10.25 hour shift became 12.25 hours.

‘Deputy director at Heathrow Raj Johal introduced these new rosters. They are highly unpopular amongst the staff, higher officers, senior officers and including the rostering and resource management department.’

He also claimed that more than 20 per cent of staff were off sick in August, whereas on a normal day the absence rate is around half that. The worker added: ‘It’s only going to get worse’.

The Immigration Services Union backed up the staff member’s claims, saying that a range of rostering issues during the Covid-19 pandemic has created ‘chaos for staff and caused widespread resentment’.

But a Home Office spokesman said: ‘It is inaccurate to say changes to Border Force staff rotas caused a spike in sickness in August.

‘The changes were only introduced on August 22, and were made following extensive consultation with staff and the trade unions, including the Immigration Service Union, to improve our operational efficiency and effectiveness.

‘Our utmost priority is protecting the safety and health of the public. We will never compromise on border security and continue to fulfil our vital function of keeping the border secure and provide the resources needed to do this. 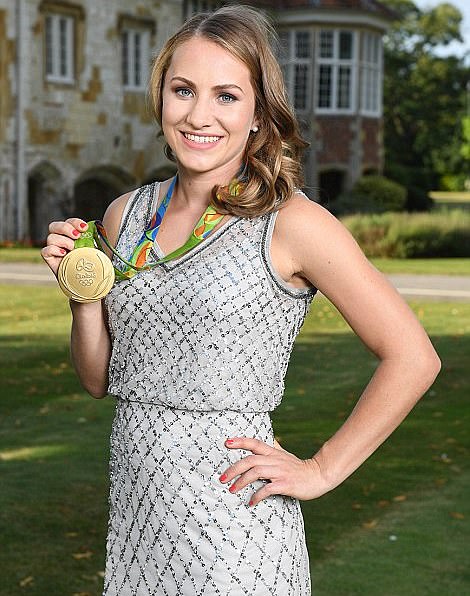 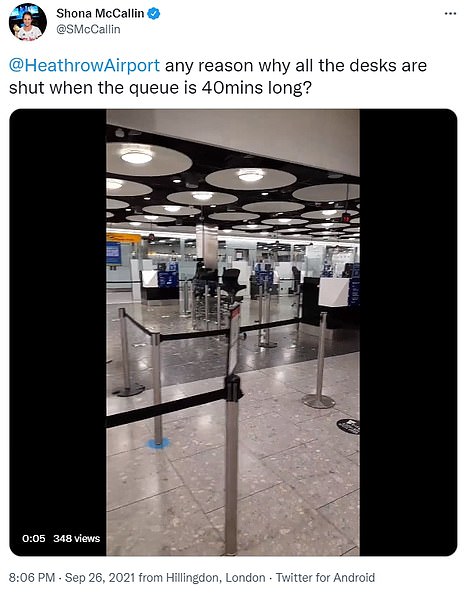 ‘Border Force regularly reviews staffing requirements to ensure resources are deployed flexibly as and when required to carry out the vital function of border security.’

Nearly double the number of people have travelled across the English Channel in 2021 compared to last year’s figures.

More than 16,400 people had made the dangerous journey so far this year in small boats by Friday, according to available official Home Office data compiled by the PA news agency.

Last year’s total was more than 8,400 – meaning this year’s figure to date is closing in on doubling the 2020 total. Further channel crossings were witnessed over the weekend.

Yesterday, a Border Force coastal patrol vessel was seen arriving in Dover full of people as well as a lifeboat with around 40 or 50 people, including families and young children, on board.

From 8am to 12.30pm, it was estimated around 150 people had arrived. Those who were arriving were seen all wearing blue surgical face masks and orange lifejackets.

Later on, a group of people, thought to be migrants, were escorted by police and Border Force officers away from the beach at St Margaret’s Bay. They had landed on the beach in a small boat following a number of arrivals from the Channel.

In October last year, a Kurdish-Iranian family, including small children, died when their migrant boat sank off the French coast. Last month, a 27-year-old man from Eritrea died after he and four others jumped overboard as their boat started to sink.

Huge queues at Heathrow were first reported on May 17, when passengers flying into the UK faced ‘bedlam’ at passport gates.

In July, passengers said they had ‘never seen anything like’ the queues at Heathrow Terminal 5 as officials blamed the scenes on staff having to self-isolate.

Similar scenes in August were also blamed on staff shortages caused by Covid-19.

Further pictures and video from earlier this month showed long snaking lines of travellers packed closely together with no social distancing.

One holidaymaker told how he saw a pregnant woman pass out after a queue only ‘moved about five feet’ in the space of around 45 minutes.

The delays on Friday were caused by what a Heathrow spokesperson said was a ‘systems failure’ impacting the airport’s e-gates.

Documentary maker Louis Theroux was among the thousands of passengers caught up in the travel chaos.

Disgruntled passengers took to social media to share their frustration with one claiming queues for immigration checks were ‘one kilometer’ long and others slamming the ‘absolute farce.’

Travel industry experts have repeatedly warned the chaotic scenes seen in the wake of the country reopening are blighting the UK’s global reputation, while running the risk of a spike in Covid cases – further jeopardising the already crisis-hit tourism sector.

Tory MPs demanded answers from the head of Border Force over the Heathrow queuing scandal seen in recent months but Paul Lincoln, the agency’s director general, has not commented publicly on the issue in recent weeks.

He has overseen a summer of Heathrow border chaos dating back to at least May, when some passengers reported three-hour waits at passport gates.

In July, it was announced he will soon leave his current role, a month after being made an OBE for services to border security.

Former Tory leader Sir Iain Duncan-Smith and James Gray, MP for North Wiltshire, have called on senior officials including Mr Lincoln to explain what is causing the ‘unacceptable’ queues.

Ola Jordan’s heartache as baby Ella, 1, has never met her parents or another child amid Covid crisis

Boy, two, chokes to death on his own blood at Ukrainian hospital