When they decided to try incubating two dozen quail eggs, their mother warned it would be ‘extremely unlikely’ for any to hatch.

So Ray Moorhead, seven, and his sister Pearl, four, were astonished when just over a fortnight later these 12 fluffy chicks emerged.

The children’s mother Emily, who bought the eggs at their local Marks & Spencer in Bromley, south-east London, said: ‘I could hear them cheeping, I was shocked. The kids were so excited.’

Filmed by his parents during the hatching, Ray explained that they had used a special incubator, adding: ‘It takes 18 days, and don’t worry, it’s worth it. Mummy thought none would hatch, but, she’s actually wrong.’ 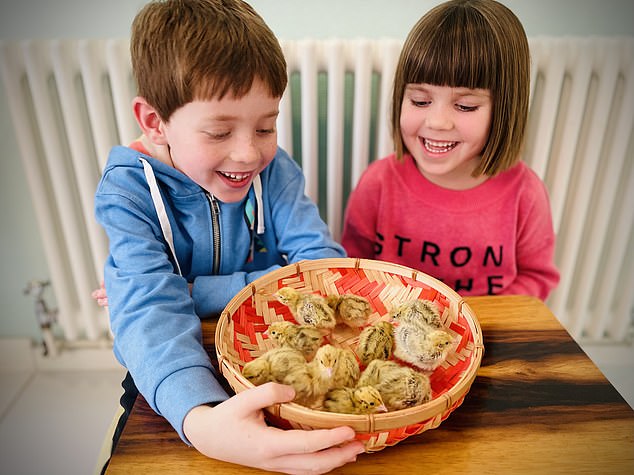 Little wonders: Ray Moorhead, seven, and his sister Pearl, four, were astonished when they incubated two dozen quail eggs and just over a fortnight later these 12 fluffy chicks emerged

Asked where the eggs were from, Pearl said: ‘They came from the farest away place, that’s Marks & Spencer.’

Mrs Moorhead, a film producer, said the children are overjoyed and spend hours cleaning, cuddling and feeding the chicks.

She believes hatching 12 from 24 eggs – the boxes were the last on the shelves and near their sell-by date – is a record.

‘As a lockdown experiment it couldn’t have gone much better,’ she added. ‘I now have 12 quails that are due to start flying next week. I’ve had to buy nets in preparation.’

Ray said: ‘We have been feeding them, helping them to learn how to drink from the bowl. And we’ve got more than anyone else in the world has ever had.’

They are giving ten to a friend, Andrew Jones, who runs a restaurant in Norwich. He will serve the eggs they produce – a female quail can lay 300 a year.

M&S said: ‘The odds of hatching out a quail egg purchased in a retail pack are extremely slim. Our farmers work incredibly hard to ensure our free-range eggs aren’t fertilised.

However, on the very rare occasion it does happen, they are completely safe to eat.’