China launched a new scathing attack today on the British ambassador in Beijing over an article she wrote defending freedom of the press.

The Communist regime summoned Dame Caroline Wilson to make ‘stern representations’ as it accused her of arrogance, double standards, bias and manipulation.

Dame Caroline posted an article on social media last week which described how the foreign press was being vilified as anti-Chinese for daring to criticise the government.

Beijing blocked access to piece and angrily rebuked Dame Caroline, but today they launched a fresh volley of sinister propaganda against her after she made plain on Twitter that she would not bend. 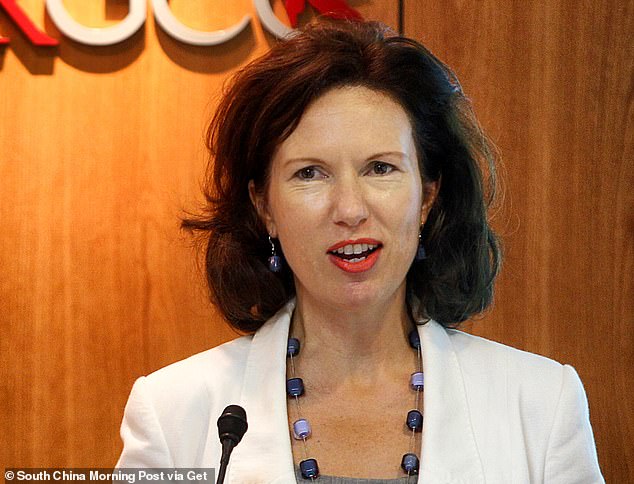 Dame Caroline posted an article on social media last week which described how the foreign press was being vilified as anti-Chinese for daring to criticise the government. Dame Caroline, who speaks Mandarin and Cantonese, as well as French, German and Russian, is best known to Britons for her skilful handling of Boris Johnson in the BBC documentary Inside the Foreign Office

The foreign ministry said: ‘As the top envoy of the UK to China, she purposely confused libel with news supervision by crying foul for some foreign media being sanctioned over fake news and untrue reports. She ignores the fact that the foreign side has cracked down on Chinese media.

‘The article is full of the arrogance of being the master and ideological bias. It confuses the white with the black, [and] manipulates double standards.

‘This act is severely out of line of her diplomatic role and the duties of its diplomatic office. The Chinese side demands Dame Caroline deeply reflects on her own duties, positions herself correctly and does more things that benefit the development of bilateral relations.’

It comes after Dame Caroline doubled-down on her position, writing in a tweet: ‘No doubt the outgoing Chinese Ambassador to the UK stands by the 170+ pieces he was free to place in mainstream British media.’ 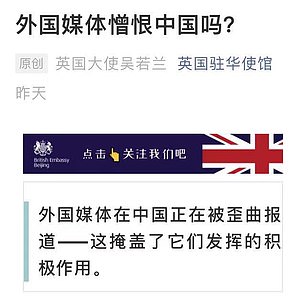 Wilson penned an article on Weibo, the country’s equivalent of Twitter (picutred), defending foreign journalists who criticise the country after they were accused of ‘hating’ China

In her article, she had provided the example of the free press in the UK which plays an important role in holding the Government to account.

She included a report over the MPs’ expenses scandal and the dramatic impact it had on Parliament.

Dame Caroline said: ‘Unlike foreign media, Chinese media can only make critical reports under conditions permitted by the government.’

That followed a BBC report with harrowing accounts of torture and sexual violence against Uighur women in China’s western region of Xinjiang – allegations that Beijing denies.

The ban was widely seen as retaliation for British watchdog Ofcom revoking the licence of China’s English-language news network CGTN.

CGTN was also fined on Monday over a complaint brought by British national Peter Humphrey, who says he was forced to make a criminal confession aired by the network.

Relations between Britain and China are pinched by a range of issues from the treatment of the Uighur minority, to the railroading of Hong Kong’s freedoms and the rights of each other’s broadcasters to air and operate.

Dame Caroline, who speaks Mandarin and Cantonese, as well as French, German and Russian, is best known to Britons for her skilful handling of Boris Johnson in the BBC documentary Inside the Foreign Office.

The 51-year-old attended the prestigious Sevenoaks School in Kent before going up Downing College, Cambridge, where she studied law. She joined the Foreign Office in 1995.

'The Office': These Deleted Scenes are Pure Gold