Brenton Tarrant killed 51 people and wounded 40 more at two mosques in Christchurch, New Zealand, last year. An act of hate and terrorism unlike anything the remote island country had ever seen.

He will be sentenced this week in a courtroom filled with people whose lives he sought to destroy. 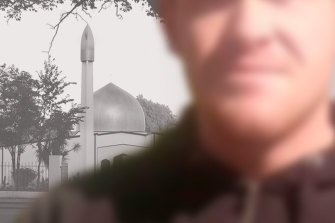 The four-day sentencing hearing for Brenton Tarrant starts on Monday.Credit:Nine

Tarrant, 29, pleaded guilty to murder, attempted murder and terrorism in March. He is expected to be sentenced to life in prison, possibly without eligibility for parole.

But the case's final phase — which will begin on Monday and is scheduled to last at least four days — presents complex legal and logistical challenges, and, for his victims, the emotional turmoil of confronting their assailant.

Significantly fewer people will be able to attend the sentencing due to level 2 coronavirus restrictions meaning fewer victims and their support people will be allowed in the main courtroom. Proceedings will be streamed to seven overflow courtrooms with a total of 230 people able to be present.

While 11 New Zealand news organisations and 18 overseas media organisations have applied to report on the sentencing, live reporting of the proceedings has been prohibited.

News of the hearing will be embargoed until the lunchtime and end-of-day adjournment.

Who is Brenton Tarrant?

Tarrant is an Australian who moved to New Zealand in 2017 with plans, he has said, to collect weapons and plot the attack he carried out on March 15, 2019.

A trail of evidence and interviews with his relatives suggest he became radicalised while travelling through Europe with an inheritance from his father when he was 20, and by connecting with extremists he met on the internet. 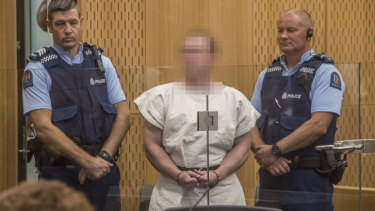 In a manifesto that Tarrant distributed online before the attacks, he wrote about his hatred for Muslims and non-European immigrants, expressing a belief in the racist "great replacement theory", which centres on the notion that falling birth rates among white people will lead them to be replaced by non-white people.

The attack took place during Friday prayer. Tarrant killed 42 people at the Al Noor mosque (two others later died in the hospital) and seven more at the Linwood mosque a few kilometres away. The youngest person killed was three-years-old.

Tarrant used five weapons he had bought legally. It was the worst mass shooting in New Zealand's history, and led to an overhaul of national gun laws, with a ban on military-style semi-automatic weapons and a gun buyback that has collected 56,250 prohibited firearms.

What makes the sentencing so complicated?

Tarrant has hoped to gain notoriety through his crimes, which he livestreamed on Facebook, bringing the violence directly to large numbers of people.

He recently fired his lawyers and decided to represent himself, making the sentencing a potential venue for the promotion of his abhorrent views, which have inspired other attacks.

Media outlets from all over the world plan to cover the sentencing, and without counsel, he may have more opportunity to speak and try to confront the families of his victims.

At least 66 people plan to deliver victim statements, either read aloud or submitted in writing.

"The unfortunate bottom line is no one really knows how it's going to go," said Alexander Gillespie, a law professor at the University of Waikato. "This is his last public performance, so for someone who has committed such an act, you can guarantee he will try to do something — and you just have to reduce that risk."

What is the court doing to keep Tarrant from exploiting the situation?

The judge in charge of the case, Justice Cameron Mander, has put in place a series of restrictions on media coverage that aim to keep provocative moments that might incite hatred from being shared immediately, if at all.

In a memo sent to journalists last week, Mander warned that he had the right to set limits on what they reported.

Other rules are already in place. Any republication of the manifesto and the video of the attacks "is prohibited and constitutes an offence," according to Mander's statement.

But doesn't Tarrant have a right to address the court?

Defendants in New Zealand are typically granted the right to provide information that could mitigate their sentence. But the judge is expected to be strict about keeping in check what can be said.

The reason a defendant committed a crime is a factor that often helps determine punishment. But Tarrant's motivation is not in dispute, because he pleaded guilty to terrorism, said Kris Gledhill, a law professor at Auckland University of Technology, who recently outlined what to expect from the sentencing. "That should allow the judge to control the hearing firmly."

So-called standby counsel may also help. The judge has appointed a lawyer to act in this capacity to "advise the offender about the law and the court process and to provide the offender with assistance if sought".

What is the maximum or most likely sentence?

Life in prison is the country's most severe criminal punishment, and its Sentencing Act requires a minimum period of imprisonment before the possibility of parole: 10 years for murder and, in very serious cases, at least 17 years.

There are no concurrent life sentences.

But the Sentencing Act also states that the court can require that a life sentence for murder be served without the possibility of release. Such a sentence has never been imposed in New Zealand. Many New Zealanders believe that Tarrant will be the first to receive one.

How do victims of the shooting feel about the process?

Many victims and their families have been struggling with a flood of emotions in the runup to the sentencing.

Wasseim Alsati, 36, a barber who was shot along with his daughter Alen, 6, at the Al Noor mosque, had to travel back to New Zealand from overseas, making use of an exception to the country's border lockdown specifically for the sentencing.

He said he had made the trip from Turkey, where he was seeking treatment for Alen, because "this was the only chance I would have to stand before him and say, Look what you have done".

His daughter, he said, still wakes up in the middle of the night screaming, and cannot walk more than a few feet without falling down because of the lasting effect of the shooting.

But the message he wants to give Tarrant involves more than the display of pain. He said he wanted to tell him: "You didn't break us".

The most important news, analysis and insights delivered to your inbox at the start and end of each day. Sign up to The Sydney Morning Herald’s newsletter here,  The Age’s newsletter here, Brisbane Times‘ here and WAtoday’s here.

Man’s penis falls off after he ignored signs of cancer

How old is Jane Fonda, what are the Book Club's stars biggest movies and who are her former husbands?

Manchester Piccadilly and Airport will get two more HS2 stations