Avenues of deciduous trees in Carlton Gardens would be replaced with more hardy species under a new master plan because of concerns about the impact of climate change on the world heritage listed site.

The City of Melbourne released a 58-page draft master plan for the gardens on Thursday. It flagged that two avenues of white poplar trees would need to be replaced as part of a strategy to make the gardens more resilient to Melbourne’s hot and dry conditions. 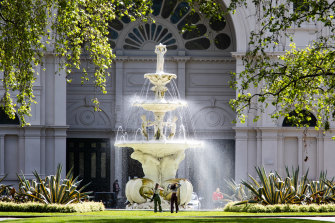 Public consultation has opened on a draft master plan for the Carlton Gardens. Credit:Jason South

The white poplars were given an “amber” rating for vulnerability in a moderate climate change scenario and a “red” rating if the impact of climate change was more extreme.

The plan does not specify what trees should replace the poplars, but suggests planting species that are “climate ready”, of similar size and with similar leaf colour and characteristics.

This is a change from the previously accepted heritage approach of replanting with like-for-like species at the gardens, which attracted 3 million people annually pre-pandemic.

Councillor Rohan Leppert told a council meeting this week the draft plan was aimed at retaining the character of the gardens. 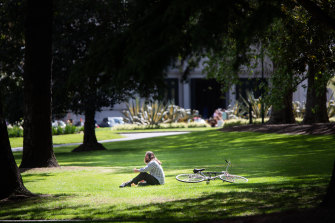 Enjoying the sunshine in the Carlton Gardens on Thursday. Credit:Jason South

“As some tree species in these gardens will die in warmer weather, we want to make sure all those heritage characteristics are kept with climate-ready species going forward,” he said.

Fiona Bell, deputy president of community group the Protector of Public Lands, welcomed the plan, but said she was devastated when three 120-year-old elm trees were cut down at the gardens earlier this year after they were found to be diseased.

She said tree replacement had to be managed with care as it had potential to give the park a “completely different appearance”, but acknowledged it was also important to be realistic about what trees would survive in the future.

“If they’re planning to lop down a whole avenue, that’s a serious thing that could alter the appearance of the gardens a lot,” she said.

Ms Bell said the community group was particularly concerned about damage caused in hosting the annual Melbourne International Flower and Garden Show, citing disturbance to earth and tree roots when machinery was used to set up and pack up the event.

“They’ve already lost a lot of trees in the south side of the gardens over the past 10 years or so. We believe some of that is due to compaction,” she said.

Amended guidelines for large events, such as the garden show, are recommended in the draft master plan, which also proposes upgrades to toilets, lighting, paths and additional planting and new garden beds.

Ms Bell said all replacement trees should be carefully considered.

“If you start putting eucalypt in, that will affect what’s on the ground underneath and the types of birds as well, it would be a major change to the appearance,” she said.

“Our major concern is the preservation of the Carlton Gardens, and keeping them open and available to the public. They are valued, and we need maximum preservation of our World Heritage site.”

‘The Batman’ Gets New Release Date in 2022, Warner Bros. Shuffles More Movies Too