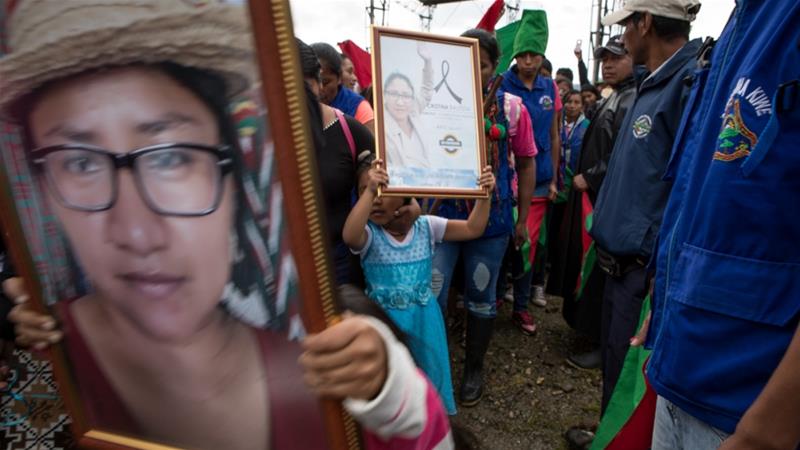 Tacueyo, Cauca, Colombia – More than 1,000 people gathered in Tacueyo, Cauca, a town in southwest Colombia, on Saturday to mourn the death of indigenous governor Cristina Bautista, who was killed last week along with four volunteer community guards in a massacre that has become a searing emblem of the state’s unrelenting violence.

The number of indigenous people killed in the area has risen sharply as armed groups seek to seize control of the power vacuum left by the Revolutionary Armed Forces of Colombia (FARC) after they demobilised as part of the 2016 peace deal.

The resulting power struggle has left the indigenous movement in Cauca, which defends land sovereignty, in the middle of violent efforts by armed groups to gain territorial control. The vioence has been heightened further by the region’s drug trade.

The UN has documented 52 murders to indigenous people in the northern part of Cauca this year alone. 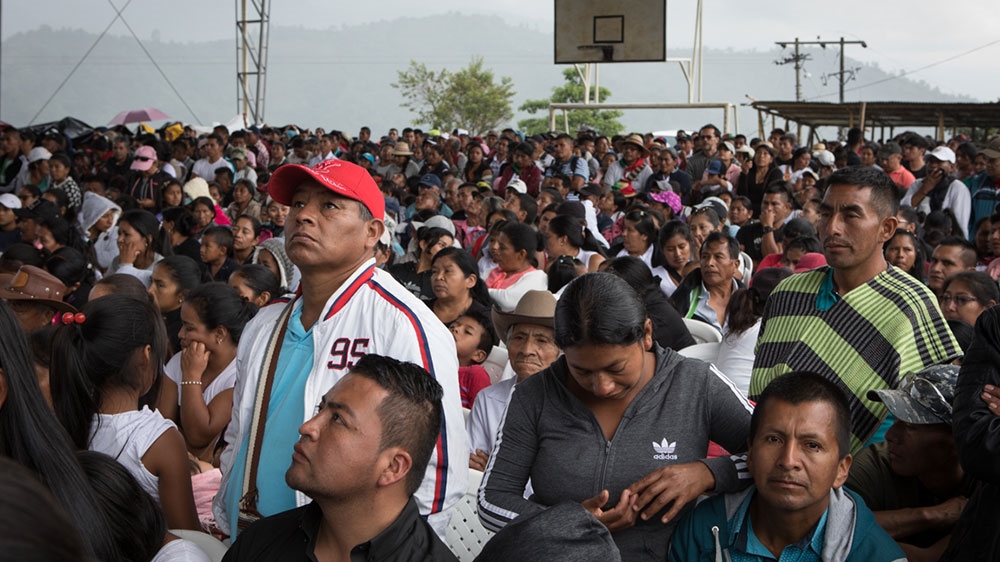 Last week’s killings come as the country faces a national epidemic of social leader assassinations. According to data from the Bogota-based conflict research organisation, INDEPAZ, between the beginning of 2016 and May this year, more than 700 leaders – 150 of whom were from Cauca – have been killed.

“They kill us if we keep quiet, and they kill us when we speak out,” Bautista said in a speech during the funeral of two other indigenous people in August.

Bautista was an internationally recognised leader, who had represented indigenous women at the UN.

All of the victims of last Tuesday’s attack belonged to a powerful indigenous movement in the state, which has long fought for land and autonomy rights.

Paramilitary groups have made dozens of death threats to indigenous leaders. Some of the most aggressively targeted people in Cauca are those who participate in the “Indigenous Guardians”, or “Kiwe Thegnas” – land defenders, as they are called in the native Nasayuwe language. The Guardians are an unarmed community defence force that protects indigenous territory.

On the day of last week’s attack, the Guardians were patrolling near Tacueyo when they discovered two vehicles carrying people who had been kidnapped.

Nora Elena Taquinas, another governor of Tacueyo who survived the attack, told local media that one of the indigenous authorities parked his car across the road to block the passage of the vehicle and rescue of the victims. He called for backup, she said. Upon arrival to the area, indigenous authorities, including Taquinas and Bautista, temporarily released the people tied up backseat, but realised that the perpetrators were heavily armed and had grenades. Gunfire sprayed down from the hills surrounding them, killing Bautista and four Guardians. At the site of the attack, the truck that had carried the governors has been incinerated to a charred skeleton. 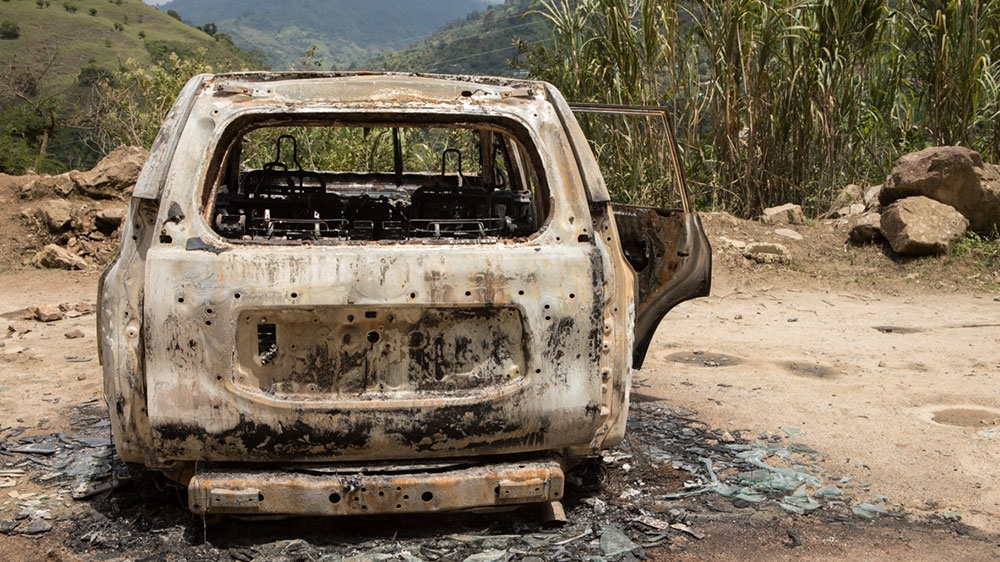 Immediately following the incident, the national head of the Indigenous Guardians, Lucho Acosta, circulated an audio recording on Whatsapp.

“We will not get scared… in these moments, we stay in resistance, full of pain for the death of our friends, but we won’t give in,” he said.

No group has claimed responsibility, but state authorities blame a dissident faction of the FARC rebel group that calls itself Dagoberto Ramos for the attack.

President Ivan Duque made an emergency trip to the Cauca on Wednesday, and ordered 2,400 soldiers to be deployed in the region to strengthen security.

“I hope to make some important announcements about operational capacity in the region and the capacity we will have to face these threats,” Duque reportedly said on the visit. 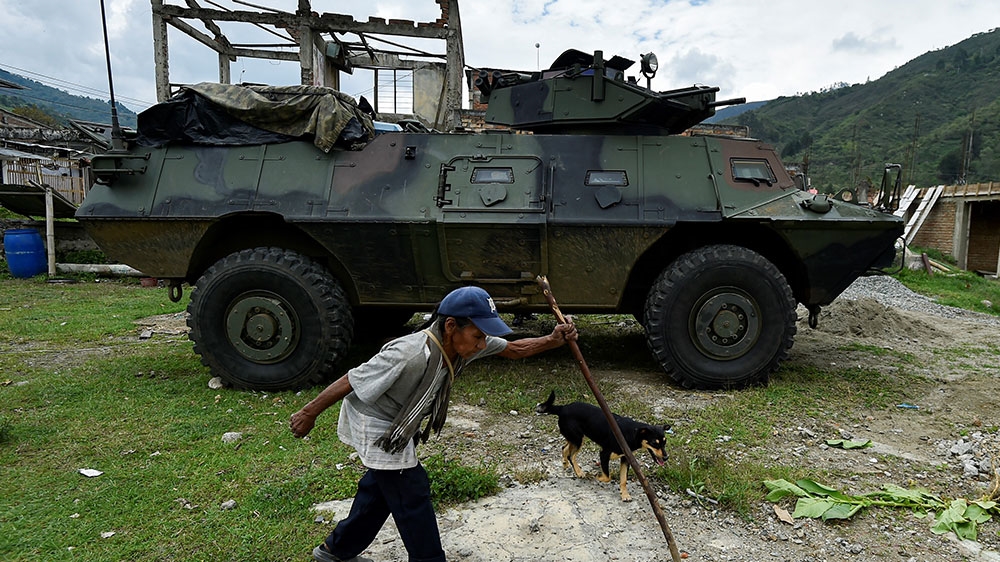 But indigenous authorities strongly oppose the militarisation of their territories.

“Every armed group, whether legal or illegal, has only brought us more war,” said Giovanni Yule, a human rights leader from the Regional Indigenous Council of Cauca.

“That has never made us safer,” he told Al Jazeera. The Indigenous Guardians do not carry weapons out of a categorical rejection of armed violence.

Instead, the National Indigenous Organization of Colombia (ONIC) has appealed to the Colombian government to follow-through on implementing the 2016 peace accords, which put forth plans for illicit crop substitution and aimed to draw rebel members into civilian life.

Some experts attribute the explosion of armed groups to the government’s failures in carrying out the agreement.

At a news conference last Wednesday, the day after the attack in Tacueyo, Aida Quilcue, the director of human rights at ONIC said Duque’s right-wing government has done nothing to mitigate the indigenous “genocide” happening in Colombia. ONIC has documented about 120 indigenous assassinations in the country this year – one every 72 hours.

ONIC leaders have also appealed for international intervention to quell the bloodshed, citing lack of government support. They have urged the Inter-American Commission on Human Rights and the UN Special Rapporteur on Indigenous Peoples to visit Cauca and verify the conditions of “genocide”. 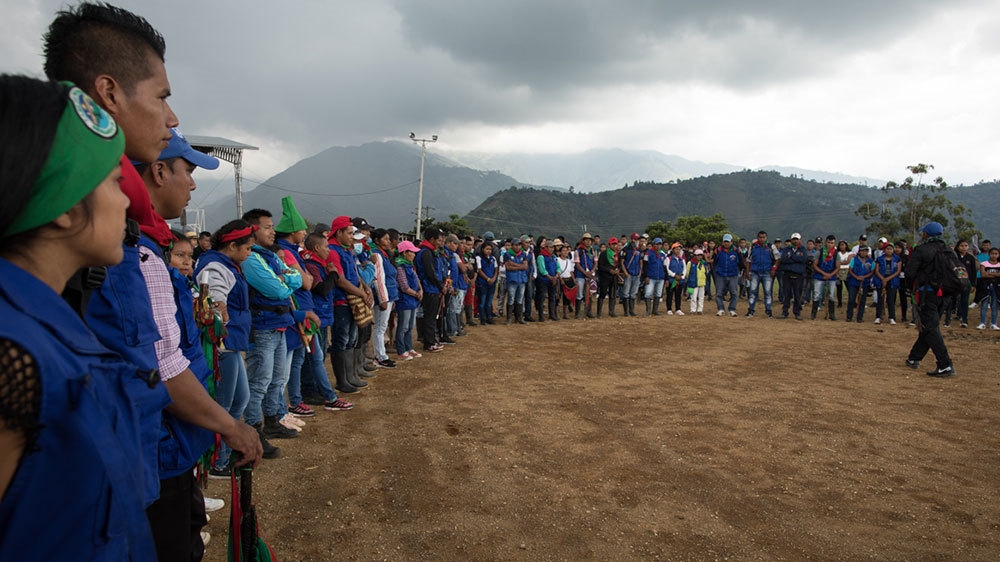 UNHCR on Friday urged the authorities to “establish a prompt, thorough, independent and impartial investigation” of the killings.

“We also urge the authorities to break the cycle of impunity relating to threats, harassment and killings targeting indigenous peoples,” Marta Hutado, a spokeswoman for UNHCR, said in a statement. “We urge the government to respond to this dramatic situation in a comprehensive and consultative manner, and not simply through increased military presence.”

At a local level, the Indigenous Guardians in Cauca have refused to give up their autonomous processes to challenge the violence. In a muddy field outside of the stadium where Bautista‘s body was displayed on Saturday, dozens of Guardians reinforced their commitment to protect the community.

“Are we going to let them terrorise us for fear of death?” a coordinator of the guard shouted.

“No!” the row of Guardians replied.

They remembered Bautista‘s famous words: “I am convinced there are more of us who want peace than war.”