Fascinating colourised pictures have emerged telling the story of the London Underground throughout the 20th century – from trilby hats and antique carriages to a belly dancer advertising Turkish Delight.

The London Underground was the world’s oldest underground passenger railway and has been open to the public since 1863, with the post-WWII years witnessing a particularly rapid period of expansion and modernisation.

Pictures release by an archive show some highlights from the surrounding decades, including the opening of a new Central Line extension in 1947 and the installation of brand-new signalling equipment that would revolutionise the network.

In one picture from 1968, an actress named Bonita Daniel is seen posing in a jewel-encrusted bikini while filming a live advert for Turkish Delight – the retro brand of chocolate.

Other images show the first Victoria Line trains in 1968, the newly-build Wanstead Station in 1947, and Londoners engrossed in their daily papers while commuting to work in 1947.

Despite suffering major disruptions during World War II, the Tube has continued to grow – and currently serves a whopping 272 stations. It hosts 1.35billion passengers a year – beaten only by the Beijing Subway and Shanghai Metro. 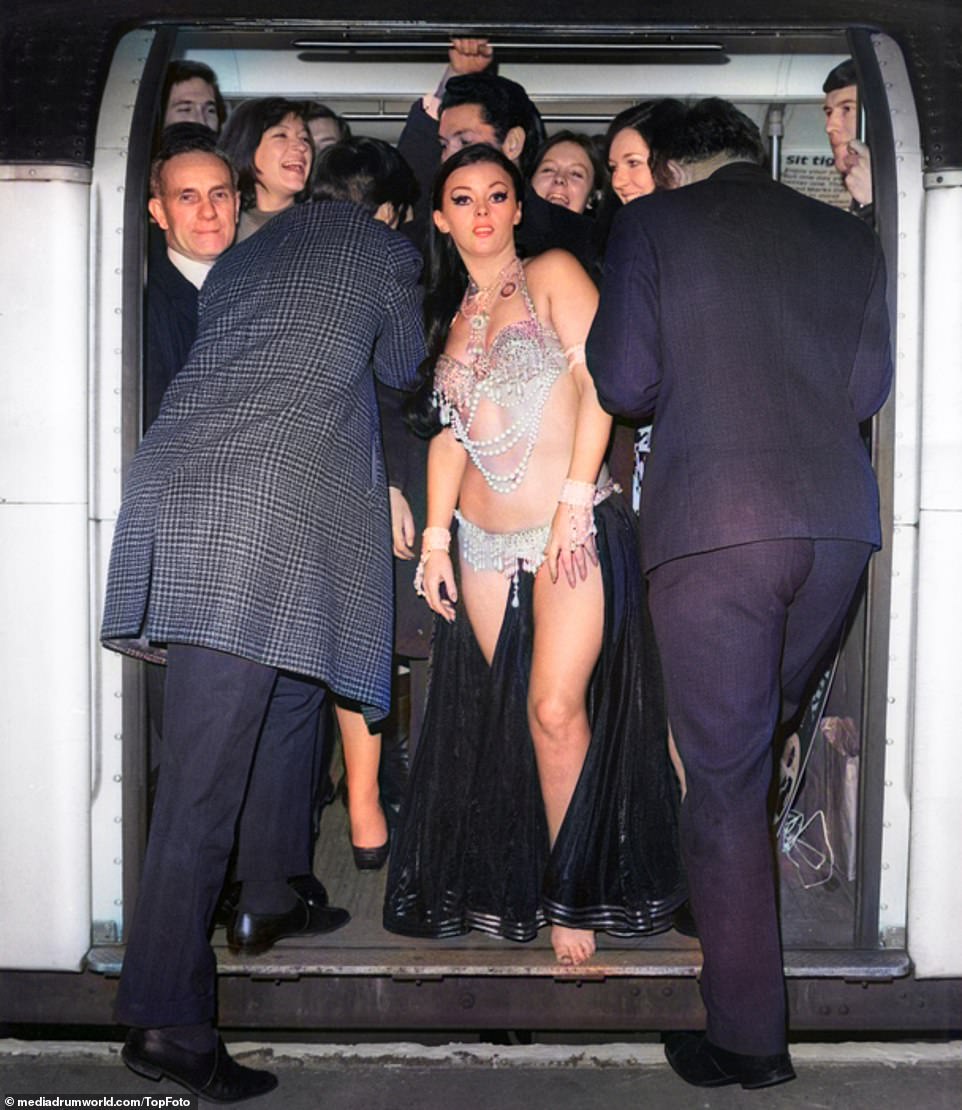 Actress and belly dancer Bonita Daniel poses on a London Underground train during a live commercial for Fry’s Turkish Delight in 1968. It is one of a series of newly colourised images that have emerged showing the Tube throughout the twentieth century 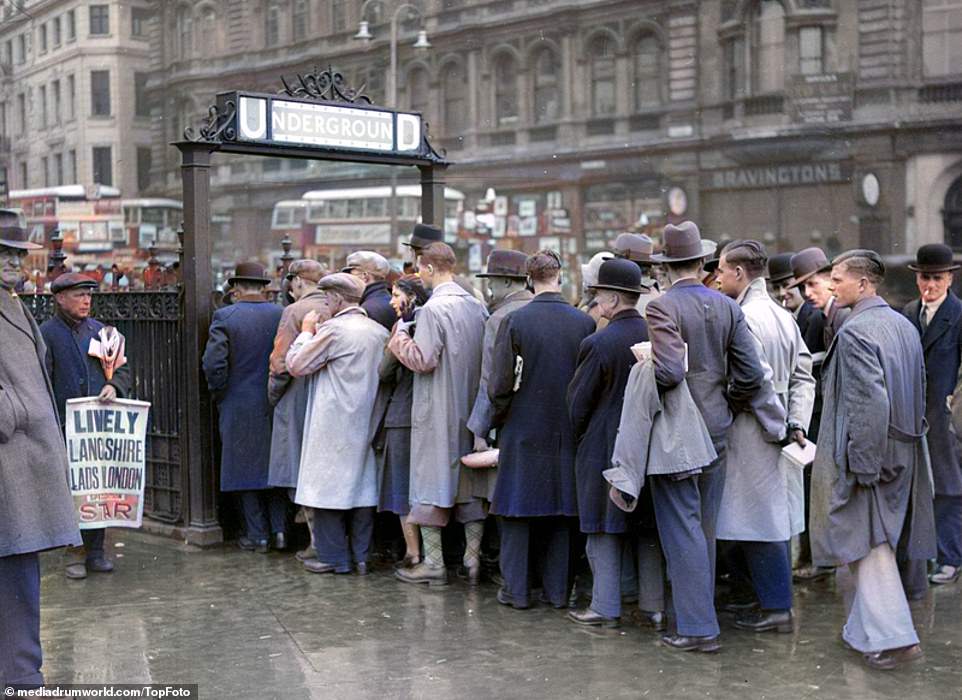 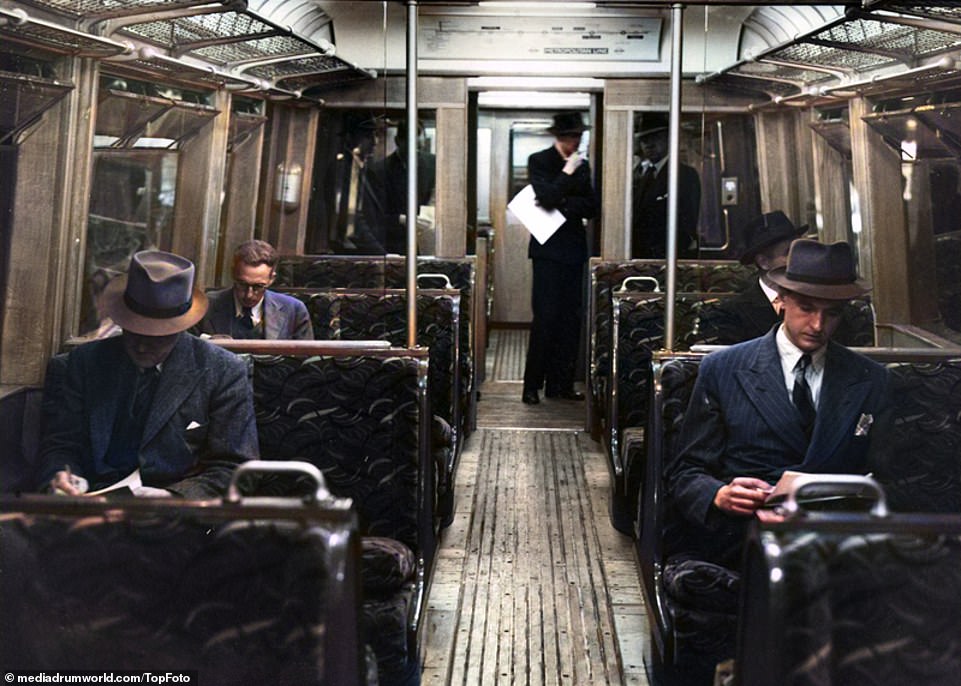 Londoners going to work on the Underground on June 11, 1947 in a carriage divided into compartments by glass sliding doors, a novel arrangement at the time. Most of the passengers appear to be engrossed with reading while one man carries documents in one hand while standing near the doors 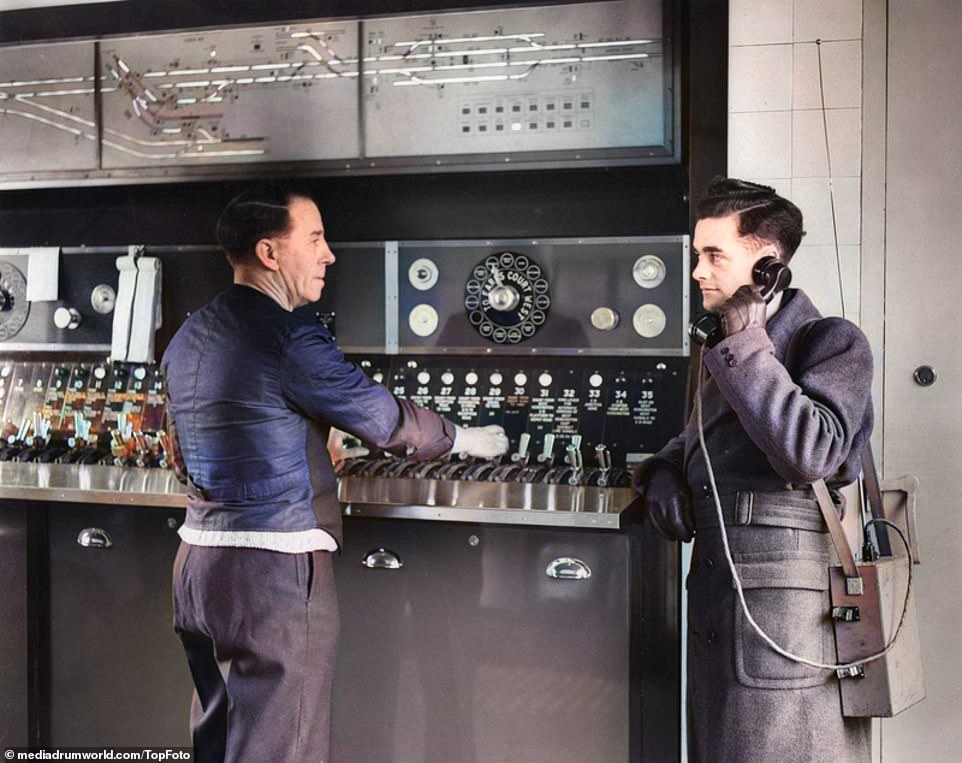 This picture shows the ‘ walkie-talkie ‘ set being used in a signalling cabin on April 13, 1949. Most of the old manual signalling systems – used to tell drivers when they can pull off from stations – have been replaced with digital alternatives that are more efficient 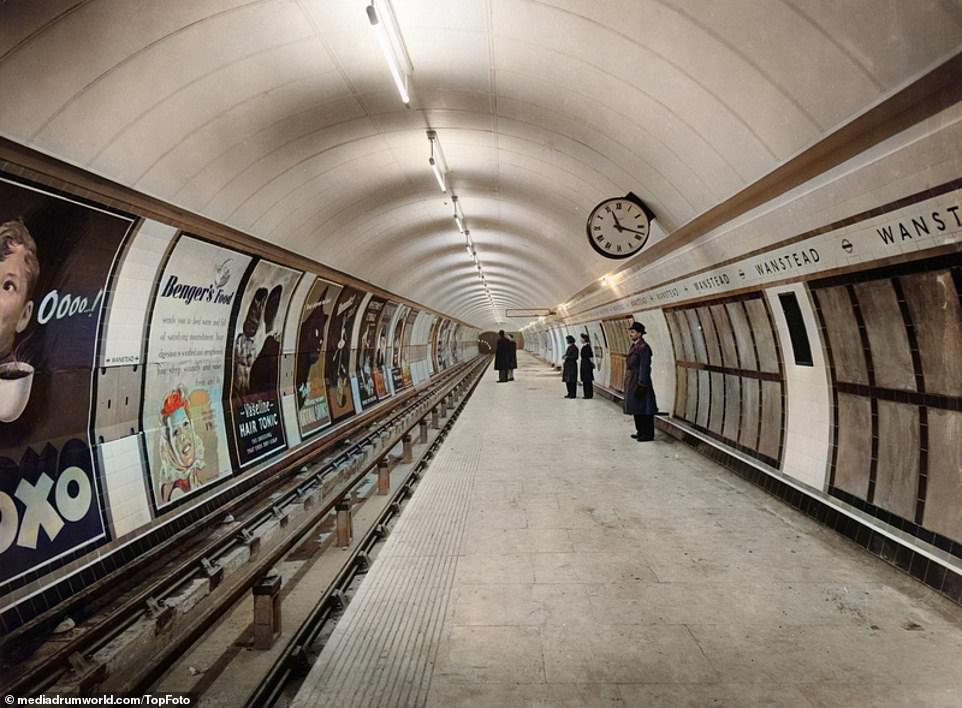 The new Central Line extension from Leytonstone to Woodford and Newbury Park, pictured on December 11, 1947 at Wanstead Station. Advertisements lining the platform include one for Oxo and Benger’s Food, a form of nutrient supplement for children 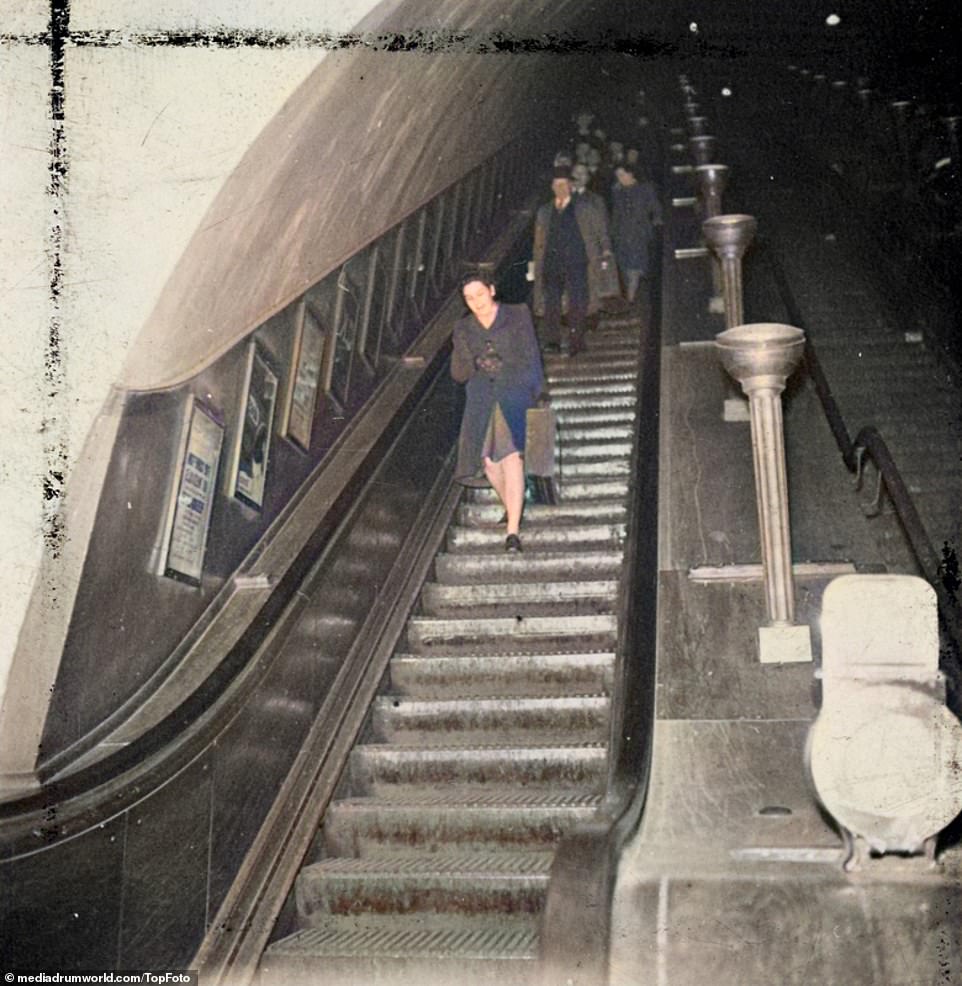 Passengers walk down an escalator on the London Underground in 1946, in a scene that will be broadly familiar to modern passengers. The Tube has its origins in the Metropolitan Railway, the world’s first underground passenger railway, which opened in 1863 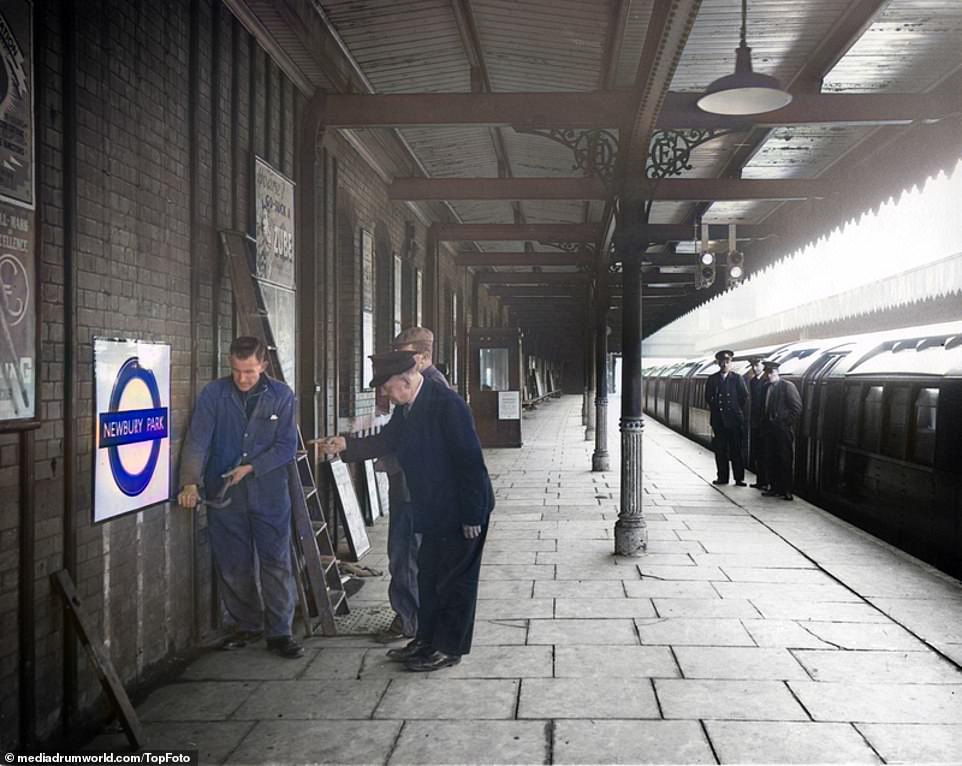 Station Master, AE Hills, watches as a new station sign is fitted at Newbury on December 11, 1947. The iconography of the Tube – including the famous logo – has changed little in the ensuing decades. The system was originally owned by a series of private companies but is now under public control 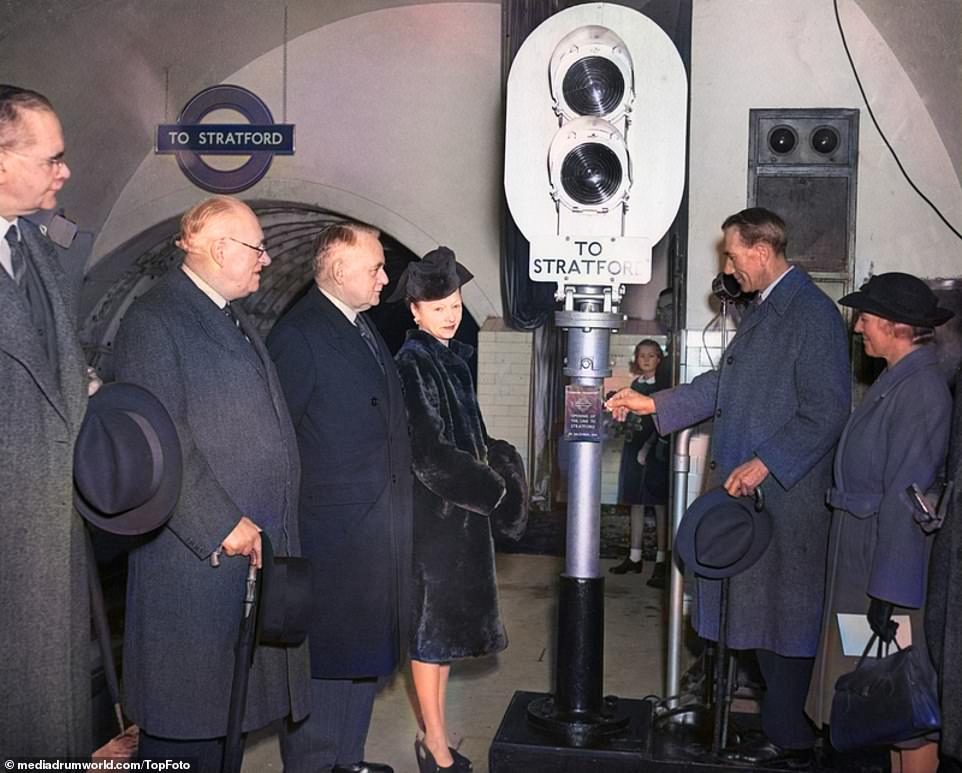 Minister of Transport, Alfred Barnes, inserts the golden key into a signal machine at Liverpool Street station before the first train left on December 3, 1946. The Labour politician, a son of a docker, served in the government of Clement Atlee, the party’s longest serving leader 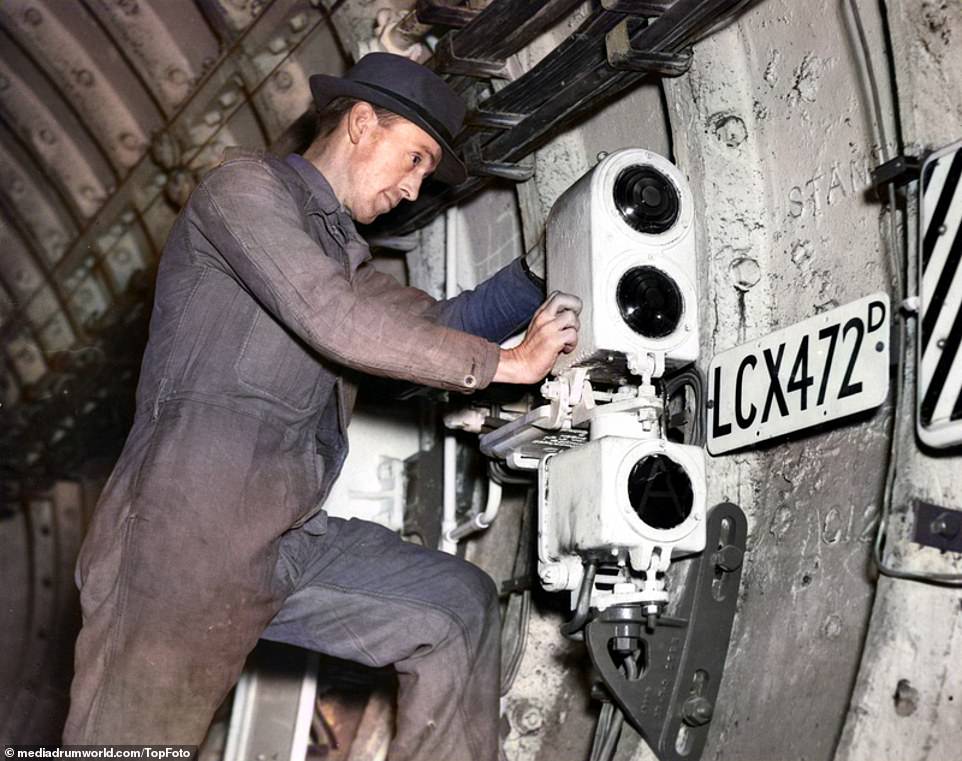 Signal lamps are fitted at the entrance to the tunnel at Bethnal Green station on November 18, 1946. The London Underground has been open to the public since 1863, and was the world’s first underground railway. Despite suffering major disruptions during World War II, the subway system has continued to grow – and currently serves a whopping 272 stations 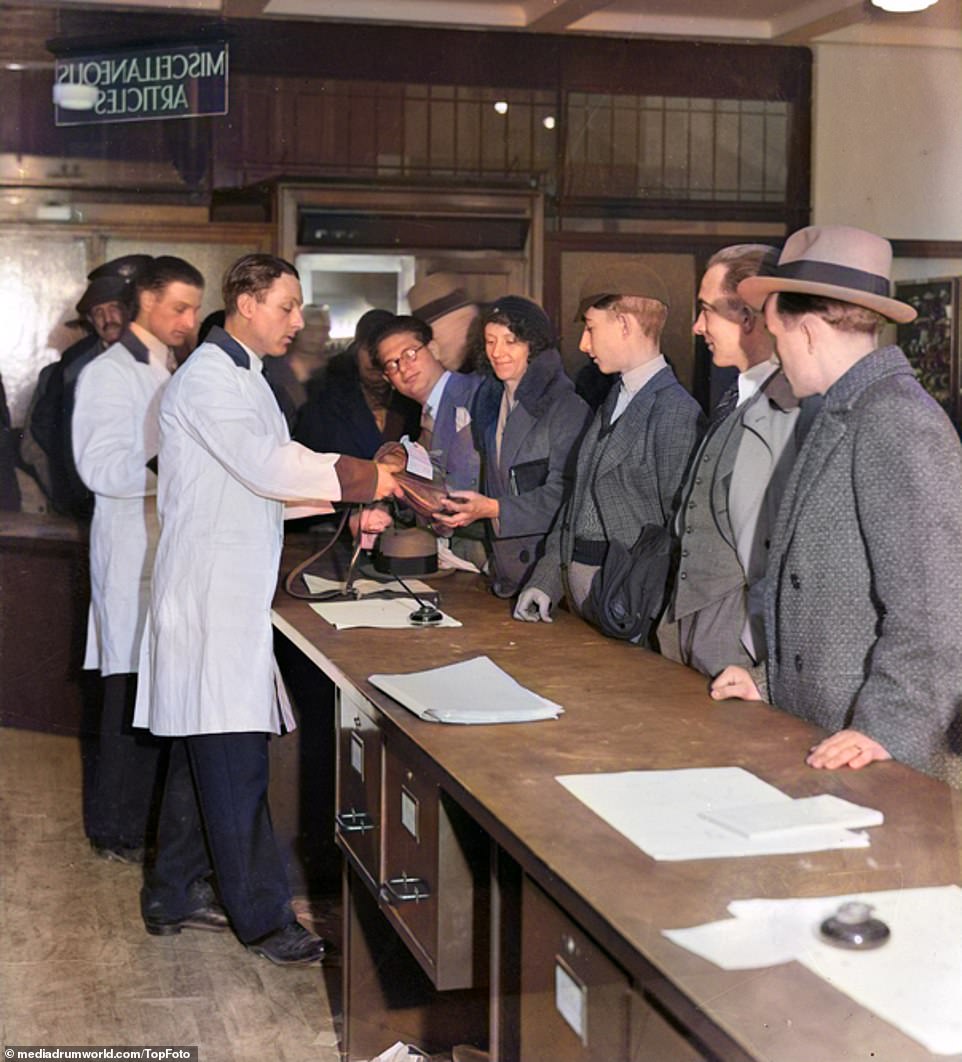 A group of passengers queue up at what appears to be a lost property desk to have items returned to them. The system now handles 1.3billion passengers a year. It is currently the third largest underground transport system in the world – beaten only by the Beijing Subway and Shanghai Metro

Meghan Markle: Will She Bring an End the Royal Family as We Know It?