Sydney commuters have been warned to expect widespread disruption across the city’s public transport network next Monday as bus drivers plan a 24-hour strike.

In the latest industrial action set to hit Sydney’s transport network, bus drivers across the inner west, the Hills district, the city’s south, north and west have warned they will stop work on April 11 amid a dispute over wages and workplace conditions. 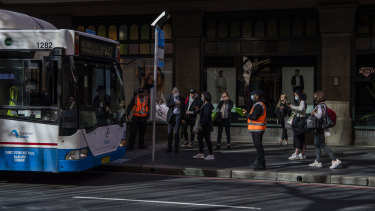 Bus drivers across Sydney are planning to strike for 24 hours on Monday, April 11.Credit:Louise Kennerley

The 24-hour action will be carried out across the patchwork of privatised bus networks in Sydney, with services expected to be drastically reduced.

“Central to drivers’ demands are same-job, same-pay protections, as the current system sees some drivers receiving substantially lower pay and conditions than others working in the same depot, driving the same routes,” Mr Olsen said.

“We understand the inconvenience strike action may cause some members of the public, and it’s not a decision the drivers take lightly. We have chosen the day with care, we are confident the community will understand drivers have been left with no other option to have their voices heard.”

Rail, Tram, and Bus Union tram and bus division secretary David Babineau said drivers across the network were questioning their future in the industry due to poor conditions, while many had already left.

“For $30 an hour we’re responsible for people’s kids, for people on our roads,” he said.

“We can’t sit back and let the NSW Government create situations where you have workers doing exactly the same job on different rates of pay and conditions.”

TWU and RTBU members will meet on Wednesday to discuss the action, which will impact private operators Transit Systems, Transdev and ComfortDelGro.

Threats of a 24-hour strike come just over a month after Sydney’s entire rail network was shut down for an entire day by the government amid confusion over industrial action it had agreed to.

The state government has been locked in tumultuous negotiations with the rail union over a new enterprise bargaining agreement, while nurses and teachers have also engaged in industrial action in recent months.

Transport for NSW and Transit Systems were contacted for comment.

A TWU survey found 85 per cent of its drivers operated their buses for more than five hours between breaks, while more than 80 per cent experienced verbal abuse every day.