Contact tracing would shift from Victoria's Health Department to local hubs under a plan put to the state government by infectious disease experts and community leaders.

The mayors of Melbourne, Yarra and Hobsons Bay councils and Mitchell Shire have written to state Health Minister Jenny Mikakos calling for a new community-based response to coronavirus to drive down infections. 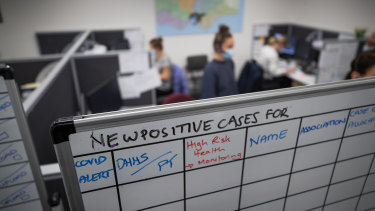 A new community-based approach to contact tracing has been urged.Credit:Jason South

“The objective of this model is to reduce the elapsed time between testing and contact tracing … resulting in an 80 per cent decrease in community transmission,” the letter reads.

Failures in contact tracing are thought to have helped fuel Victoria’s second wave of coronavirus, with some people who have tested positive waiting more than a week to be interviewed by health officials.

The mayors’ proposal is based on work by the Burnet Institute, which has devised a model that harnesses the knowledge of councils and health and community groups to swiftly begin contact tracing and provide support to infected locals.

It is a model that has been adopted in regional areas such as Geelong, which was the first contact tracing centre established outside of Melbourne.

Since then contact tracing centres have been established in Ballarat, Bendigo, Goulburn Valley, Albury-Wodonga and Latrobe.

A similar model has been effective in South Korea, and recently the British government said it would redeploy thousands of contact tracers to local authorities following concerns about the performance of its central system.

The plan aims to shrink the time between testing and contact tracing to 48 hours between the onset of symptoms and the tracing of at least 90 per cent of close contacts.

While the average time between testing and contact tracing is not known, the most recent government figures show that 88 per cent of positive cases had been interviewed within 24 hours of the Health Department being notified of their result. And 99 per cent of known contacts had been notified within 48 hours of the department receiving confirmation of the initial case.

Professor Mark Stoové, who devised the Burnet Institute’s model, said contact tracing was most effective when there was trust between the interviewee and the infected patient.

“Contact tracing effort involves a lot of very intrusive questions about where someone has travelled, where their close contacts are and the environments they visited,” he said.

“If those interviews can be undertaken and recorded and the person supported through a local service, then that's only going to strengthen the reliability of the information they provide and the effectiveness of contact tracing in closing down clusters.”

He said local contact tracers might also ask pertinent questions based on their knowledge of a community.

City of Yarra mayor Misha Coleman said community-based testing centres had been effective in keeping infection numbers low in her municipality and supporting people who needed to be in quarantine.

She said community health and testing providers should be given the role of contact tracing at a suburban level before stage four restrictions were eased to ensure a better flow of information between central and community health services.

“We need to learn to live with this virus for the next 18 months to three years,” Cr Coleman said. “So I’m really hoping that Minister Mikakos will consider utilising the capacity and contact the community health providers in metro Melbourne and the GP clinics who really want to be involved in the COVID response.”

Ms Mikakos said the government had rapidly expanded and improved its case and contact tracing teams during the pandemic.

“We’ve added doctors, nurses, medical students, paramedics and ADF personnel to boost the efforts of our contact tracing team,” she said. “There are now over 2600 people supporting our public health response.”

She did not address the proposed expansion of local COVID-19 hubs, but said they were acting with speed and agility in regional and rural communities.

“[It] will not only close the gap between testing positive and the contact tracing, but also enables direct support from council and local outreach services,” Ms Gates said.

University of NSW epidemiologist professor Raina MacIntyre said anything that boosted the capacity of Victoria’s public health response was a good idea.

While Premier Daniel Andrews insists Victoria’s contact tracing efforts have improved remarkably over the past few months, Profesor MacIntyre said NSW had been more effective at it because its public health team was better resourced.

“Victoria has far fewer resources to trace contacts than New South Wales,” she said. “It's been stripped bare and that's the problem.”

The City of Melbourne has 78 active coronavirus cases, Yarra has 41, Hobsons Bay has 76 and Mitchell Shire has 12, according to the latest Health Department data.

Our weekly newsletter will deliver expert analysis of the race to the White House from our US correspondent Matthew Knott. Coming soon. Sign up now for The Sydney Morning Herald‘s newsletter here, The Age‘s here, Brisbane Times‘ here and WAtoday‘s here.

UK Covid cases see biggest ever daily rise with 36,804 infections and 691 deaths as positive tests double in a week