A TEENAGER has revealed the horrifying moment he was pinned to the floor for 20 minutes in a killer "stampede" which left three youngsters dead last night.

He was caught up in a crush at a St Patrick's Day disco at the Greenvale Hotel in Cookstown, Co Tyrone – which killed a 17-year-old girl and two boys, 16 and 17. 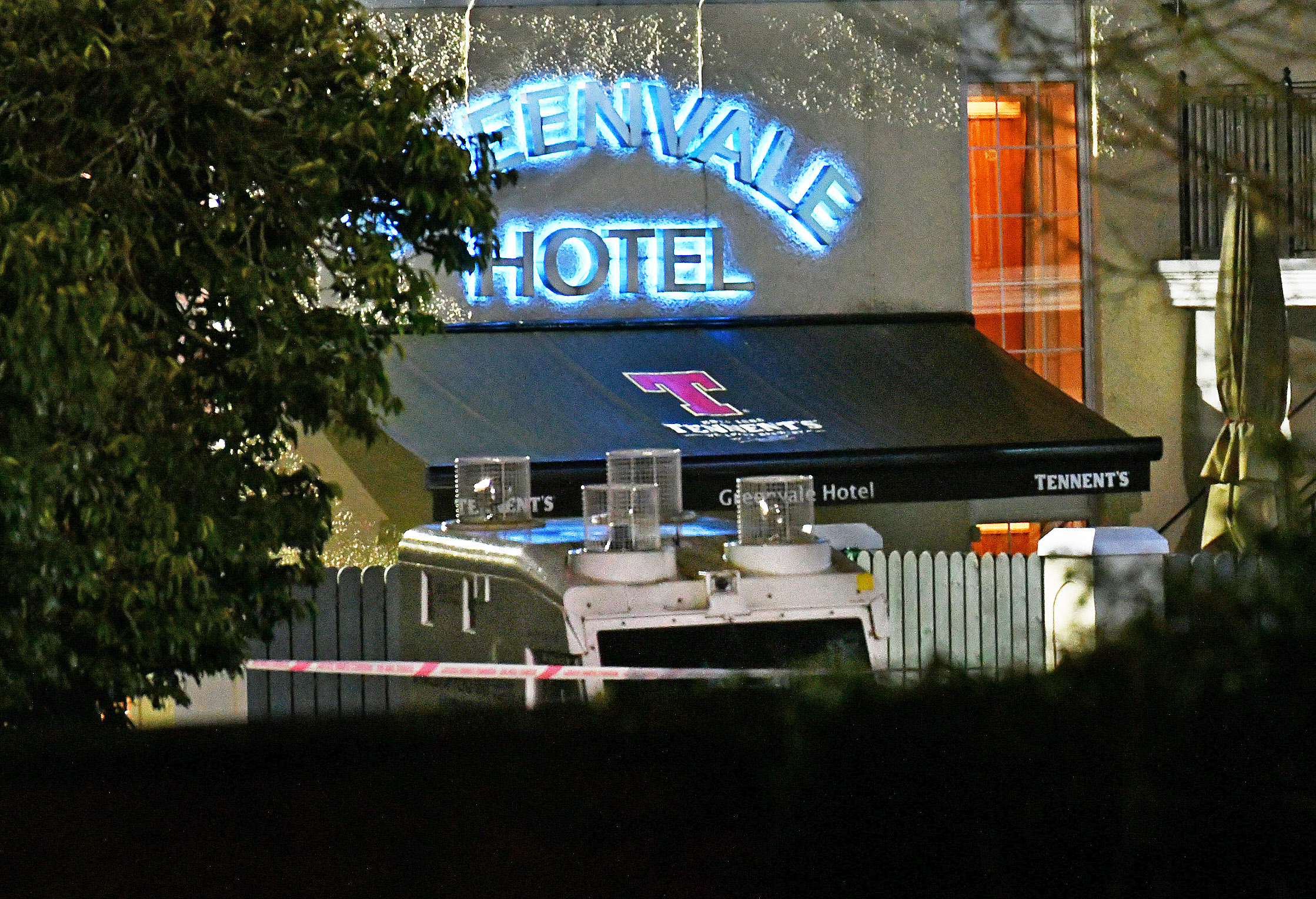 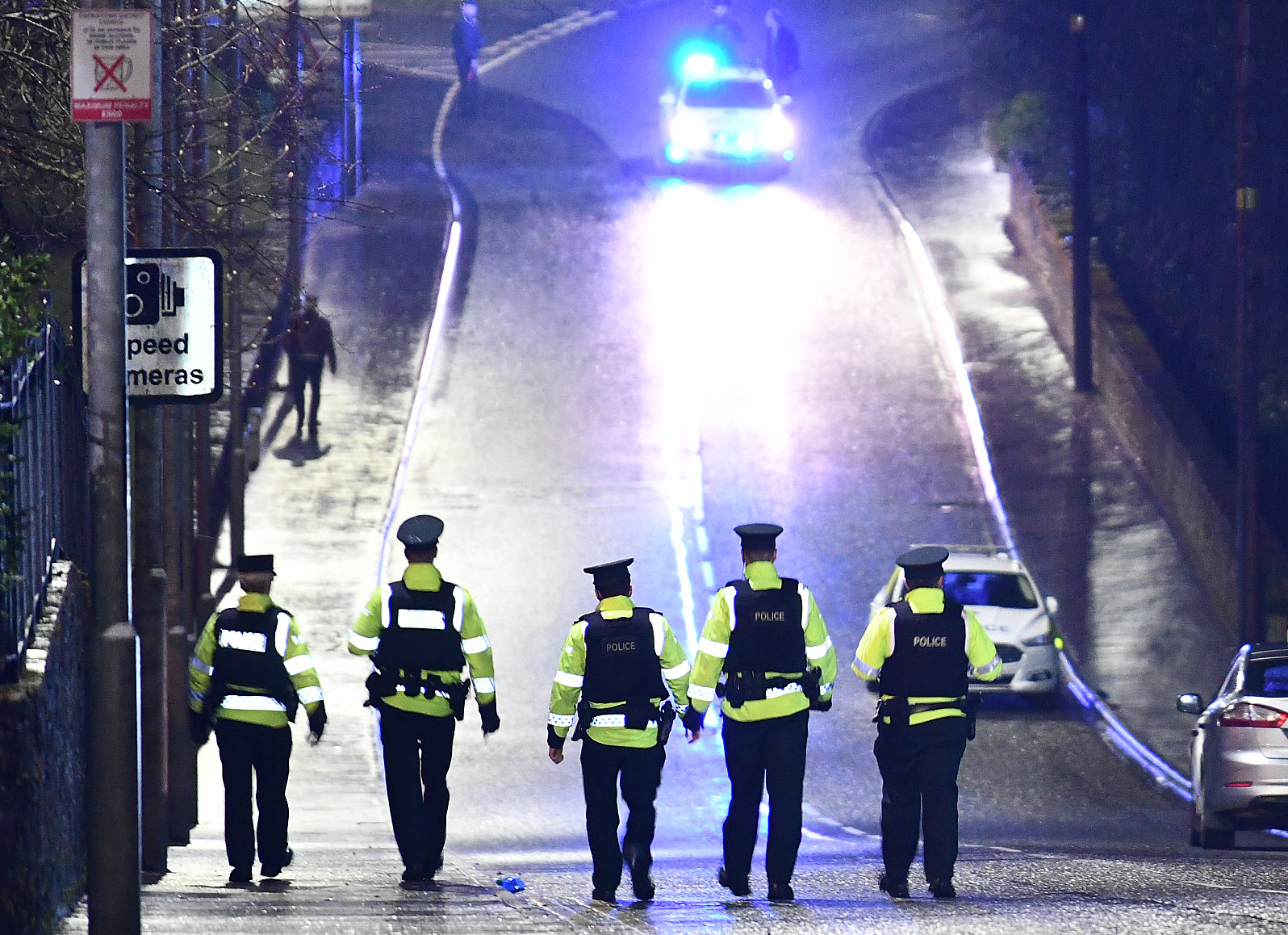 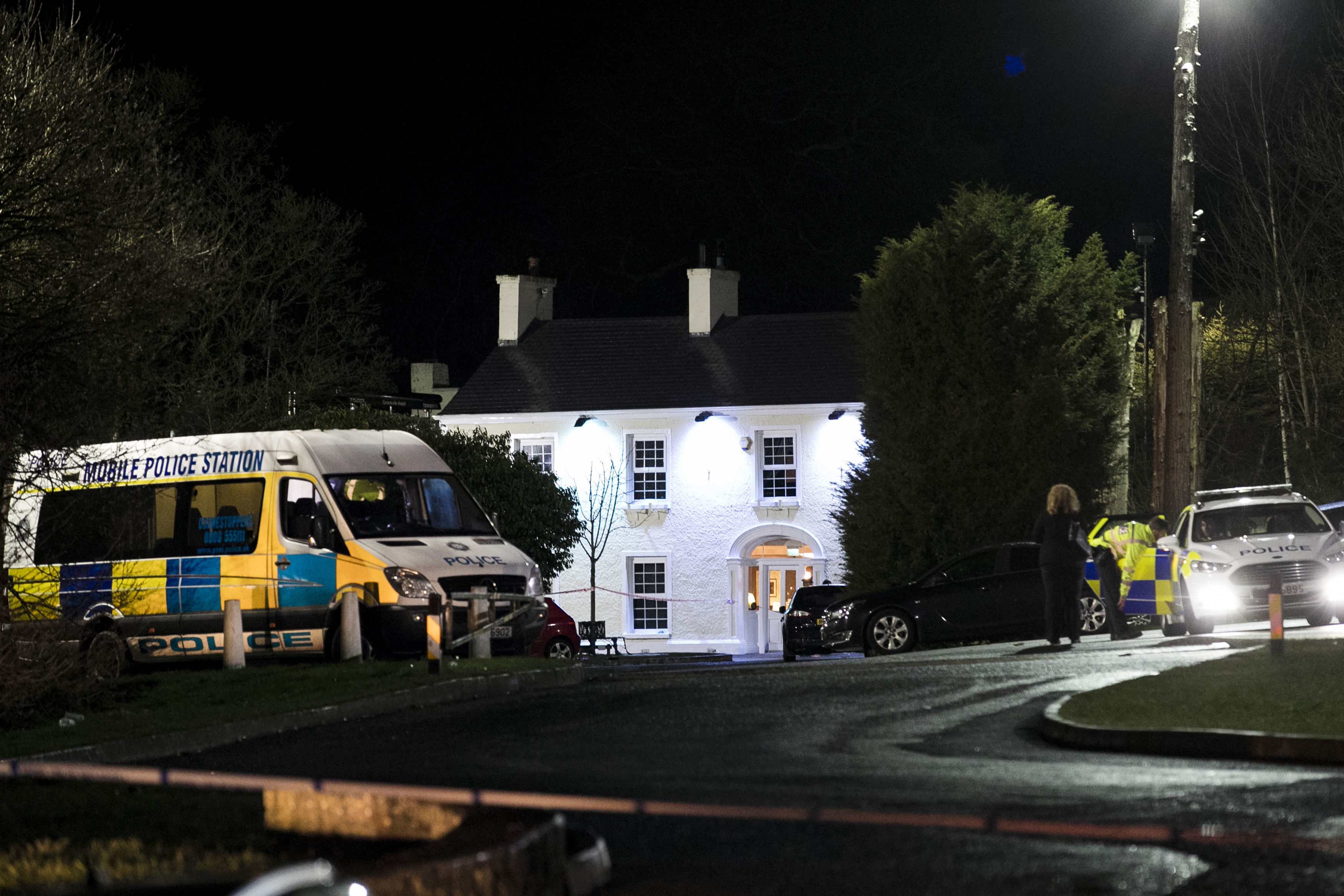 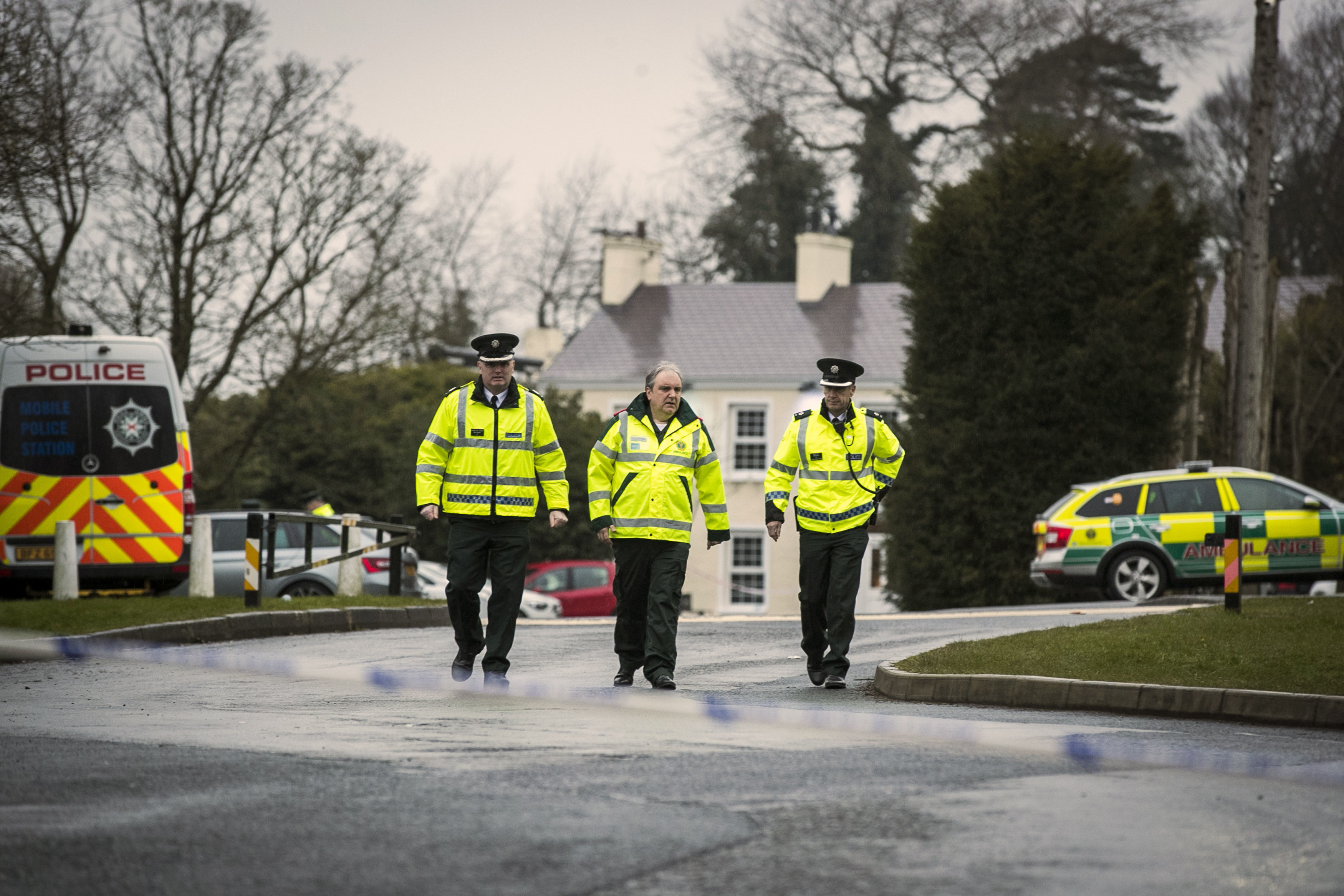 He told the Ulster Herald he was waiting outside for the disco to begin when a "stampede" began and he was trapped among a panicked crowd of more than 100 people.

He said: "It was the worst thing I've ever experienced, really frightening. I'm traumatised and after this I don't know if I ever want to go out again."

The shocked teen, who didn't want to be named, said everyone suddenly started pushing before they rushed forwards and people fell to the floor.

He added: "I was pinned down with others on top of me. We must have been there on the ground for 20 minutes unable to move.

"It was absolutely terrible, I didn't know what was going to happen or how I'd get out."

Police issued an appeal to parents to "collect your children immediately" as mayhem broke out around 9.30pm in the queue to enter the event.

He said: "Our preliminary investigations show there was a crush towards the front door of this hotel, and in that crush people seem to have fallen.

Did you witness the tragedy or know someone who was? Contact the newsdesk on 02077824368 or email [email protected]

"There seemed to be a little bit of struggling going on to get people up off the ground and that might explain also why there was a report of some fighting.

"At least one person has reported that they were assaulted.

"We are of an open mind… it looks like a crowd of young people, a large crowd, pushing up against the front of the hotel to get in to this event."

As a 16-year-old girl is still in hospital he urged people with footage of the incident to hand it to police.

He added: "We need people to come forward and tell us what happened last night. Three young people are dead, they deserve a full inquiry. Their parents need to know what happened to them."

Cops are looking at CCTV to find out what caused the crush and fatal injuries.

"People were running all over the place. We were trying to get away. Someone was doing CPR on someone on the ground.”

Ambulance crews, doctors and the fire brigade raced to the hotel car park as reports of the tragedy swirled in the small town.

UUP Councillor Trevor Wilson, who was called from the scene by an eyewitness, said: “There seems to have been a stampede, and a number of people have been badly injured.

"I'm getting conflicting reports from people about what exactly happened, but there's clearly a deep sense of shock here tonight that an event for young people just wanting to celebrate St Patrick's night went so horribly wrong."

Dr Nigel Ruddell, medical director of the Northern Ireland Ambulance Service, said six ambulances, four emergency response doctors and four emergency officers rushed to the scene and declared a major incident, as one person was declared dead at the hotel.

He said: "At this stage everything points toward it being a tragic accident and our hearts absolutely go out to the families of those involved and everybody who was caught up in this incident last night.

"We did not see anything consistent with any fight or any violent injuries at all."

Emma Heatherington, whose two sons, aged 17 and 18, had been at the event, said she "felt sick" when she saw the police appeal to collect children.

"My two boys were there so I rang them, shaking, and thankfully got them both," she said. "They were on their way home at that stage.

"They say there was a huge crowd waiting to get into the venue and then a lot of commotion up near the front of the queue, then they said the emergency services arrived and they were all asked to leave.

"They came home very, very shaken with rumours that some people had died."

A member of staff at the nearby Glenavon Hotel said he had heard the sirens as emergency services rushed to the scene, and said police had come to borrow their defibrillator.

"There were ambulances passing our entrance," he said. "It's scary, and you just hoped everyone was OK.

"It's very sad to hear what happened."

DUP leader Arlene Foster tweeteed: "Thoughts and prayers with everyone impacted by this tonight".

Colin Neill, boss of tourism body Hospitality Ulster, said: “We are devastated to hear of the confirmed PSNI report of at least two deaths this evening at the Greenvale Hotel in Cookstown.

"This is shocking and tragic news and our thoughts and prayers are with the families of the deceased.” 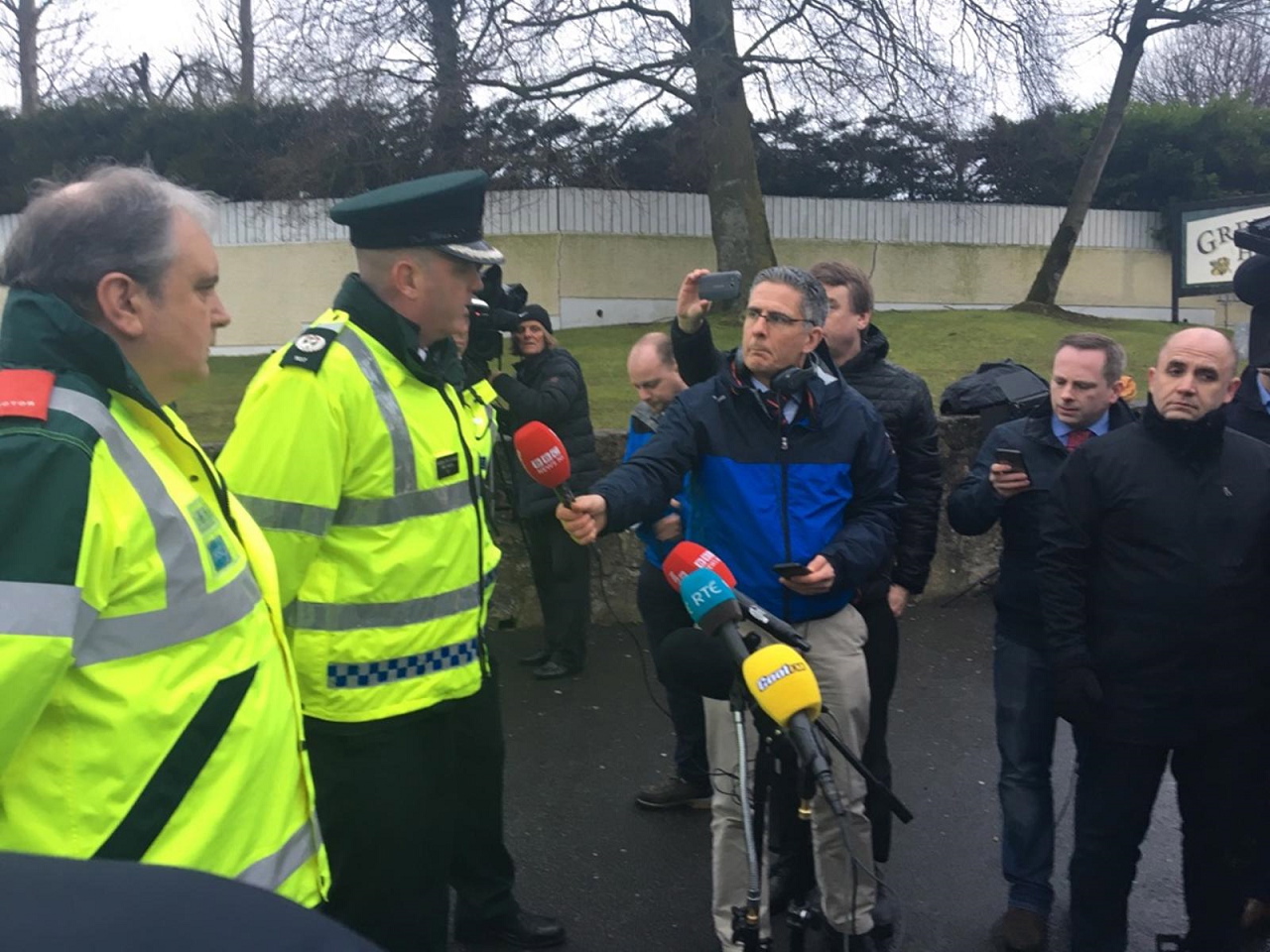 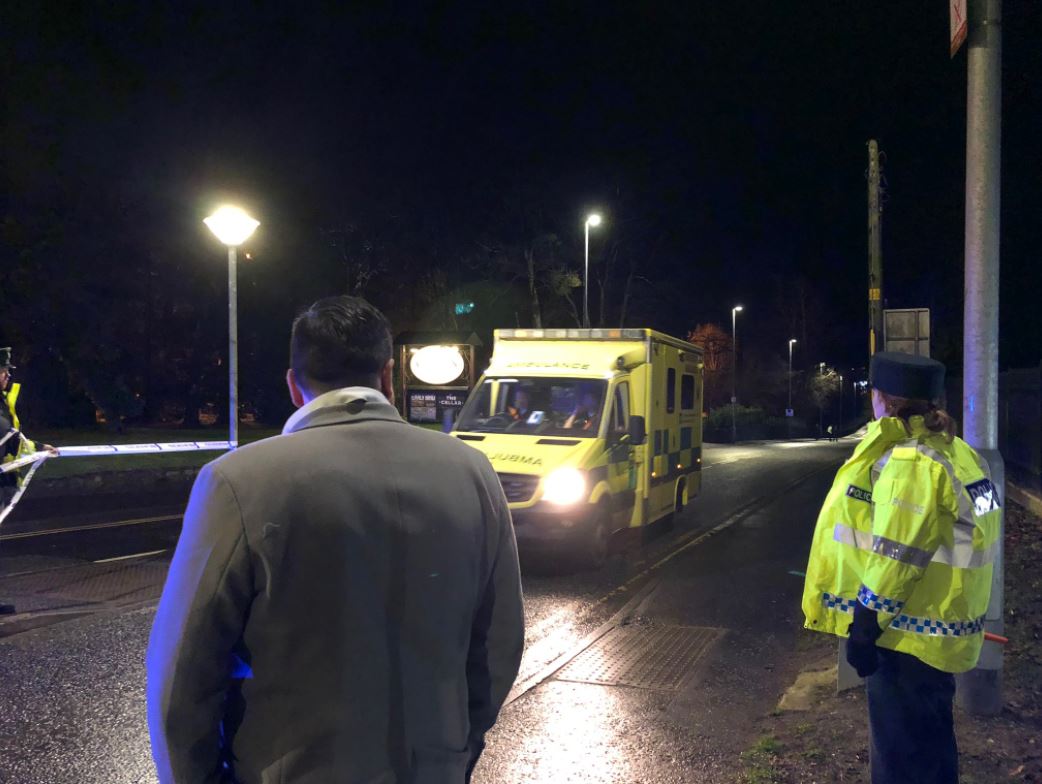 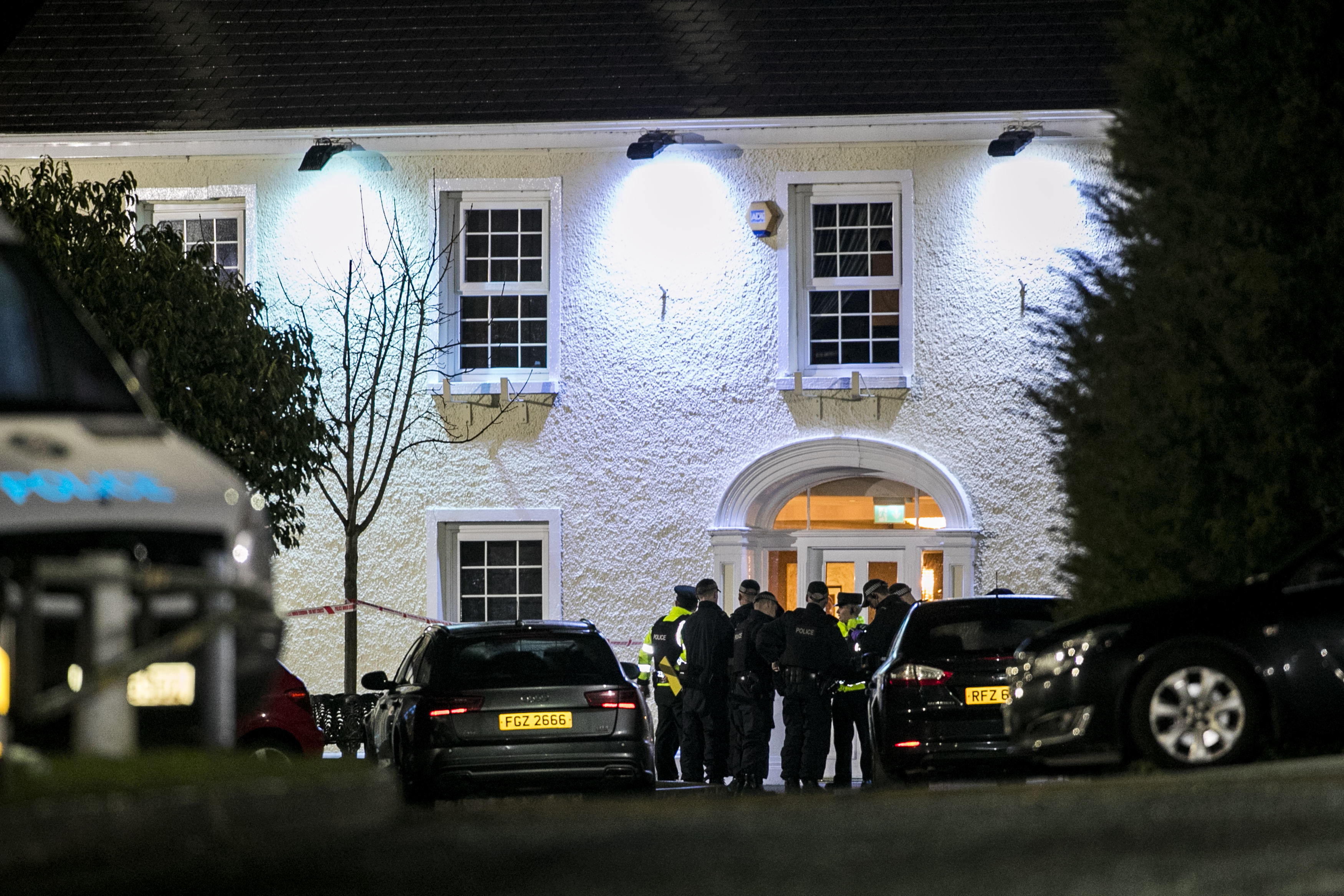 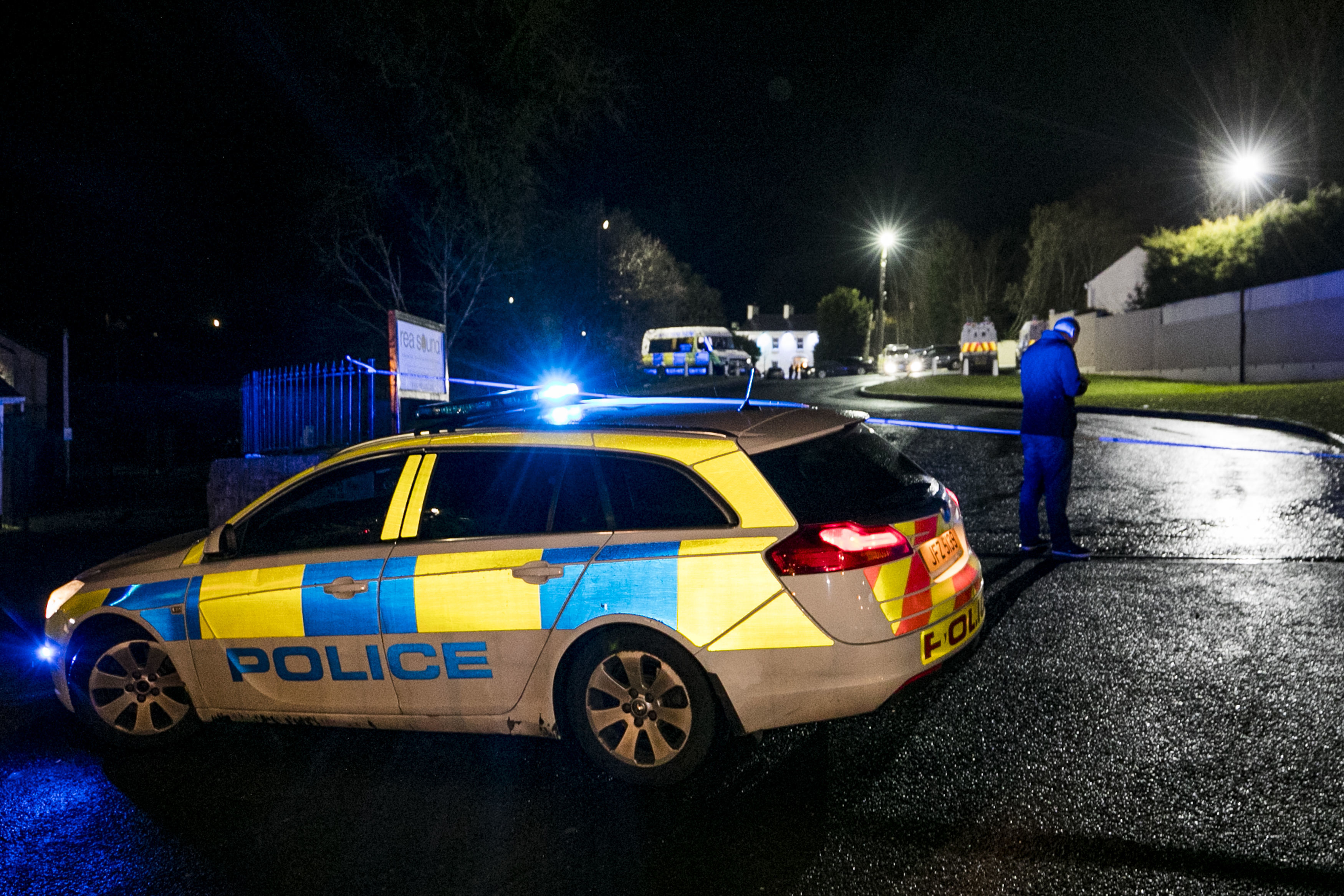 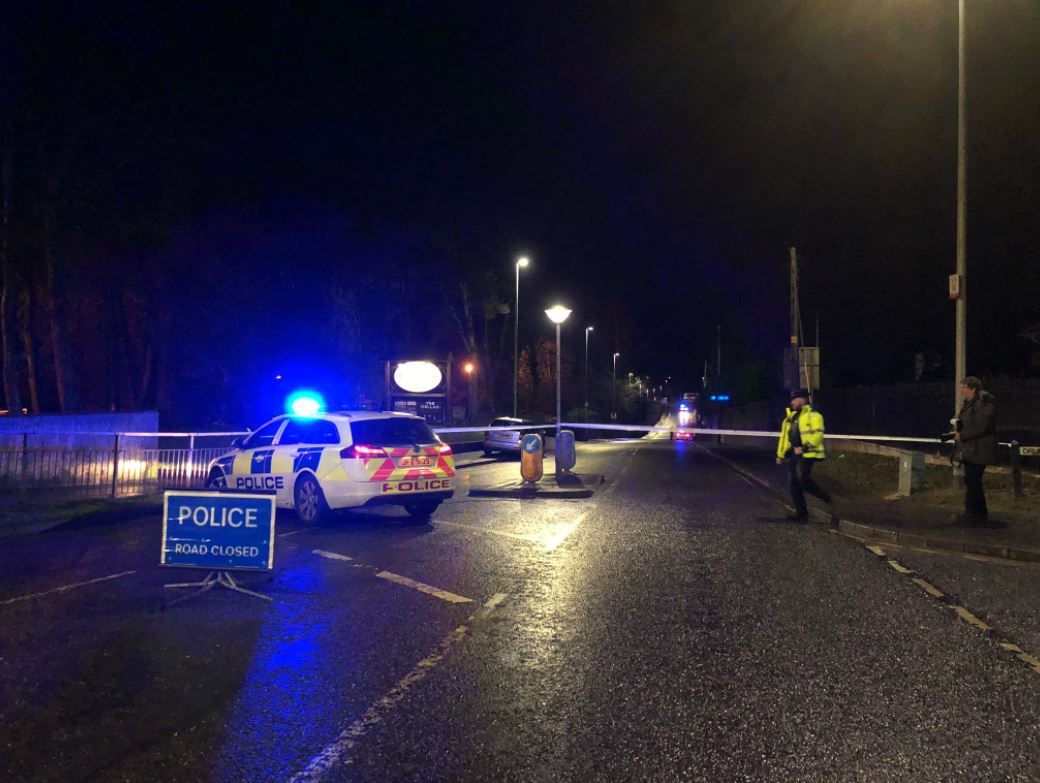 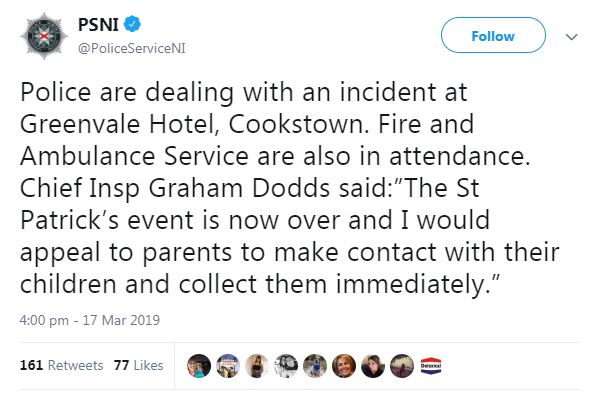 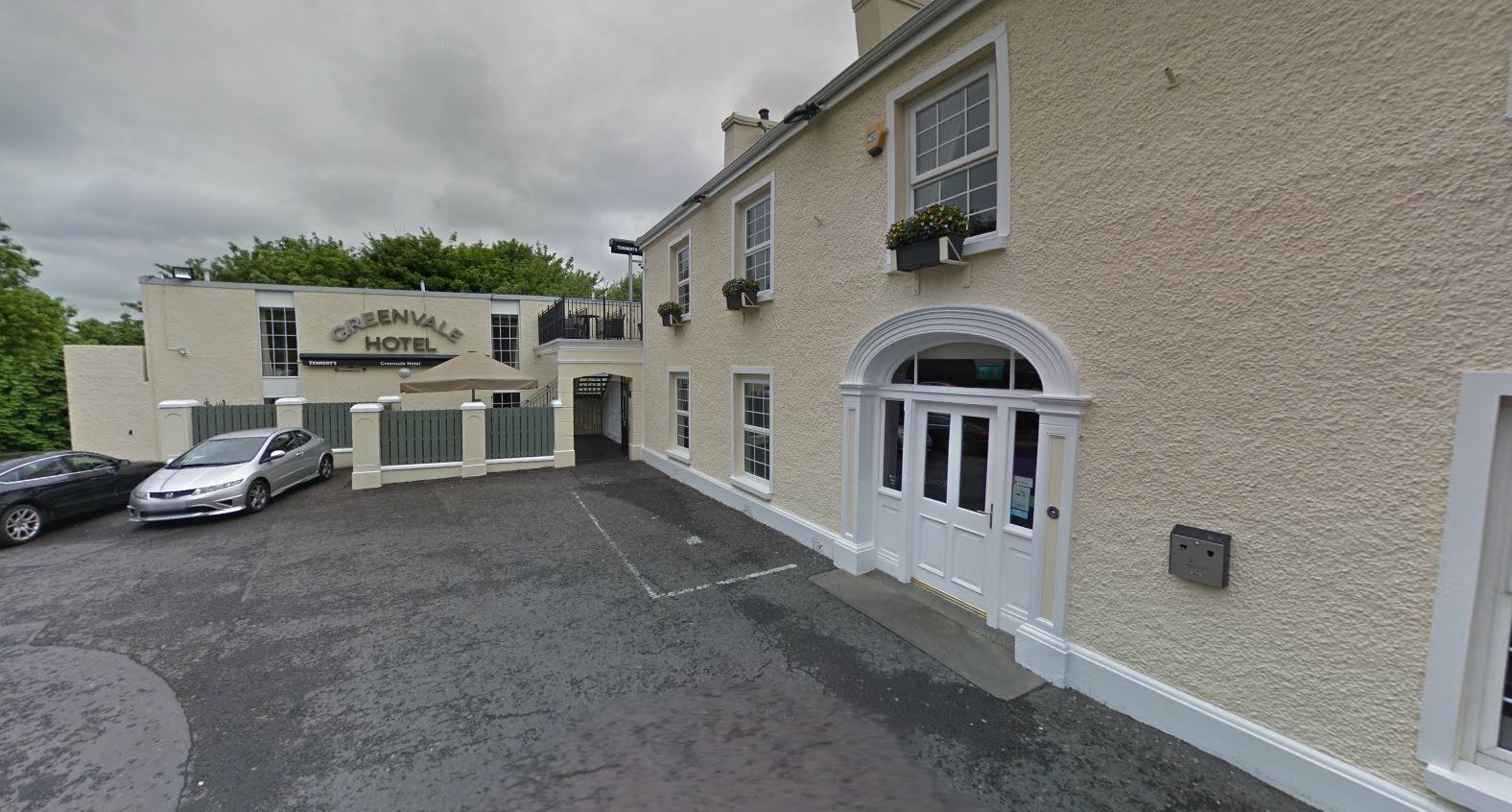 Apple, Google, Facebook and other tech giants ‘avoided £1.3billion in tax in UK’