A brave cop smashed his way into a burning vehicle before dragging the unconscious driver out and resuscitating him after detecting no heartbeat.

Bodycam footage recorded in the city of Phoenix, Arizona, shows the officer running towards the car, which has fierce flames burning on its front end.

Two officers initially attempt to force their way into the burning vehicle by smashing the driver-side window, but are unable to break through the glass.

Seeking help from a local resident, one of the officers returns with a fire extinguisher in his hands which successfully smashes the glass. 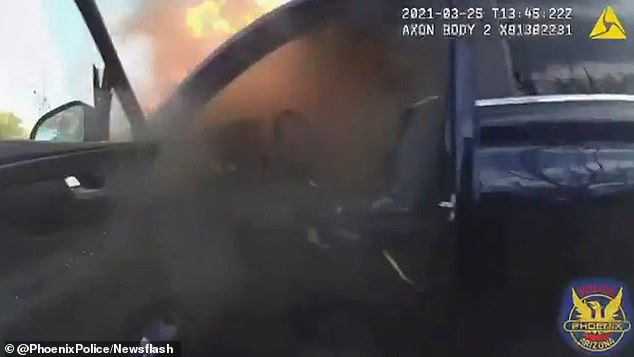 A brave cop smashed his way into a burning vehicle before dragging the unconscious driver out and resuscitating him after detecting no heartbeat in the city of Phoenix, Arizona 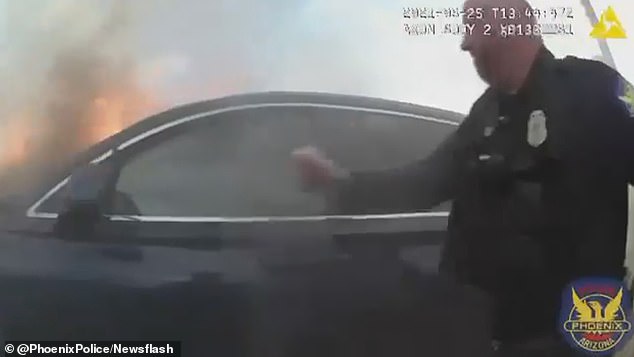 Two officers from the Phoenix Police Department initially tried breaking through the window but were unable to smash the glass. One of them returned to the burning vehicle with a fire extinguisher to gain access to through the window

Leaning an arm through the broken window, the officer is able to unlock the door and pull the unconscious driver out of the vehicle and lay him on the side of the road, at a safe distance from the burning vehicle.

At this point, one of the officers in the video is heard saying: ‘I got no heartbeat’.

The cop then crouches on the ground and begins performing chest compressions on the motionless driver.

The video was shared by the police force on social media yesterday.

The Phoenix Police Department said: ‘This Is What We Do. In situations where we don’t have time to hesitate, our training kicks in, and that could mean the difference between life and death.’

The police department also confirmed that the driver survived the incident and continues to recover in hospital.

Responding to the heroic video footage on social media, one person said: ‘It’s amazing how people forget all the good they do. Thank you for your service.’

While another thanked the Phoenix Police Department for the work they do serving their community.

Sundance So Far: A Muted Festival Struggles for Attention in Chaotic Times