‘There is no evidence’: Corbyn ally Chris Williamson pleads innocence in furious anti-Semitism row as Tom Watson says Luciana Berger being bullied out is Labour’s ‘worst day of shame’ in 120 years

Jeremy Corbyn ally Chris Williamson has brazenly insisted ‘there is no evidence against me’ after Labour finally bowed to enormous pressure to suspend him during a furious row over anti-Semitism.

The Derby North MP, who faces an official investigation that could see him kicked out of the party, vowed to clear his name after footage in which he said the party was ‘too apologetic’ sparked widespread fury.

It came as Tom Watson demanded a showdown meeting with Mr Corbyn today as he vowed to ‘speak out on anti-Semitism for as long as it takes’.

Labour’s deputy leader warned the bullying of Jewish MP Luciana Berger out of the party was the ‘worst day of shame’ in its 120 year history. 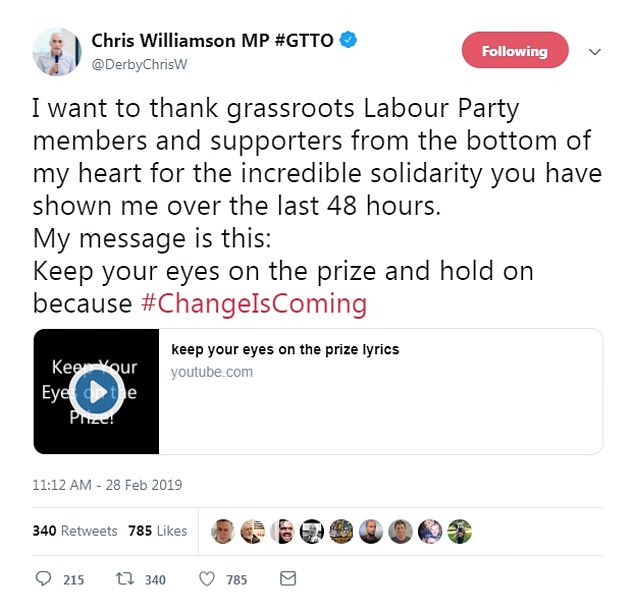 Chris Williamson sent out an unabashed message to his supporters on Twitter on Thursday morning, after Labour bowed to pressure to suspend him

Mr Williamson told his supporters ‘change is coming’ in a Twitter post which included a bizarre link to a US Civil Rights era song which tells listeners: ‘Keep your eyes on the prize, hold on’. He also thanked them for their ‘incredible solidarity’.

The MP was forced to issue a grovelling apology on Wednesday after footage emerged of him saying Labour had been ‘too apologetic’ over anti-Semitism.

But hours after he was eventually suspended pending the probe, he told the BBC: ‘I am going to clear my name within the party procedures.

‘I think I’ve got a very strong case. There is no evidence against me in reality.’

This prompted a backlash, with moderate Essex Labour MP Wes Streeting saying: ‘So much for that sincere apology, eh?’

And In a direct rebuke to Mr Williamson today, Mr Watson warned:’The truth is I don’t think we can apologise enough for anti-Semitism in our own ranks.’

Mr Watson has asked to see Mr Corbyn on Monday as the party wrestles to draw a line under the scandal which has blighted the party for more than three years. 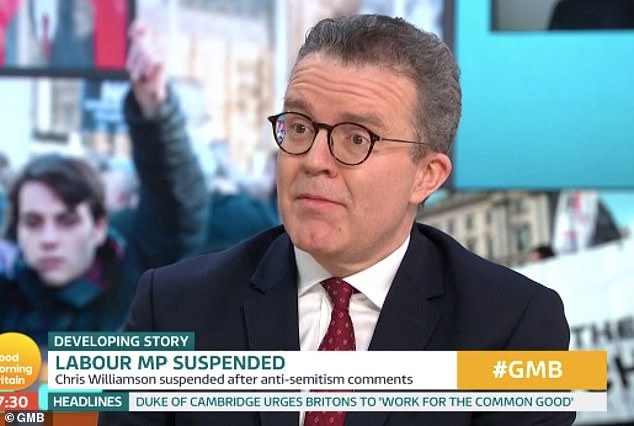 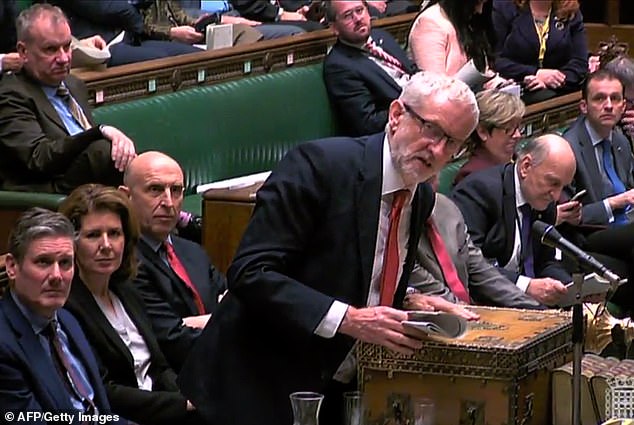 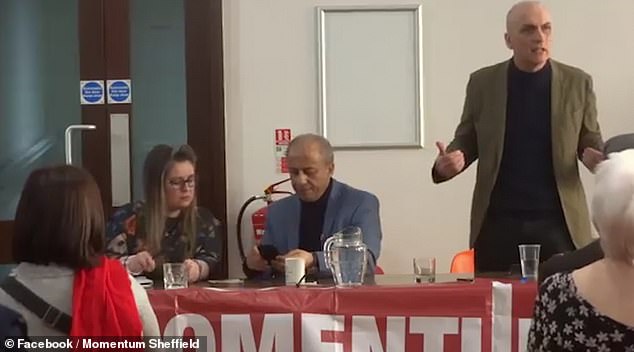 Mr Watson told the Today programme: ”I’ve asked to see Jeremy on Monday next week to talk about how we can further improve our measures to deal with anti-Semitism.

‘A pregnant young MP bullied out of her own party by racist thugs.’

He added:  ‘I’m not going to allow (party members) to be tainted by racism.

Shadow chancellor John McDonnell was involved in a furious bust-up with two senior Labour backbenchers live on television last night after defending the handling of a previous anti-Semitism case.

Jeremy Corbyn’s right-hand man was caught up in a fiery exchange with Lisa Nandy and Wes Streeting over the suspension of his former aide, the Bradford MP Naz Shah in 2016.

Mrs Shah, who beat George Galloway for the Bradford West seat at the 2015 election, shared an image on Twitter in August 2014 which called for Israel to be relocated to the US and claimed this would be the ‘solution for Israel-Palestine conflict’.

She was subsequently suspended from the party, sacked as a parliamentary private secretary to Mr McDonnell and forced to make a grovelling apology. 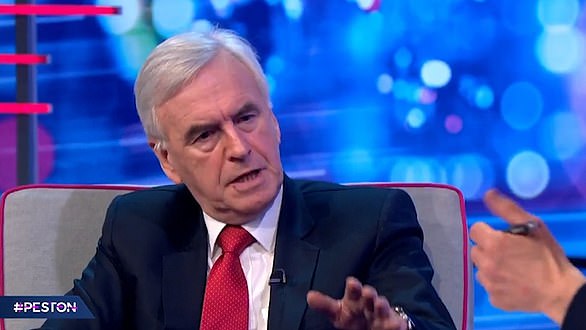 John McDonnell told ITV’s Peston the way the party dealt with the 2016 case of Naz Shah, his former aide, was ‘a shining example’ of how to deal with anti-Semitism 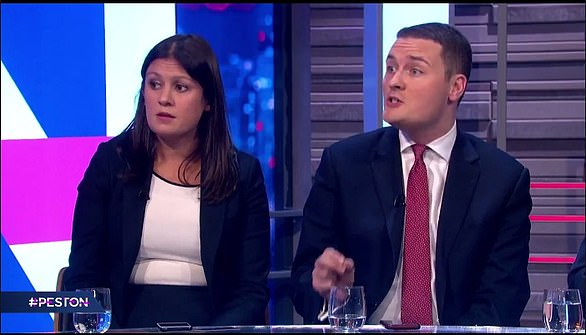 Mr McDonnell tried to claim on Wednesday night that the way she was dealt with was ‘a shining example’ of how to deal with anti-Semitism and that he had deal with it himself.

But Wigan MP Ms Nandy, who was shadow energy minister at the time, said this was ‘not true’.

In heated exchanges broadcast live online she told the shadow chancellor: ‘I was in the shadow cabinet and I was trying to get answers out of the leader’s office.

‘I was live on telly being asked questions about it – it had been going on at that point for 24 hours and no action had been taken and the official line coming out of the party was ‘we will draw a line on it’.

‘And that changed under pressure from the shadow cabinet and members of the PLP (Parliamentary Labour Party).’

Mr McDonnell replied: ‘No you’re wrong, I took that decision.’

The row later spilled onto Twitter when Mr McDonnell’s former advisor James Mills pitched in, saying: ‘I was with John when this decision was taken – he’s telling the truth.

‘I like Wes & Lisa, so nothing personal at all, they just don’t have all the details on this specific case.’

Ms Nandy replied: ‘The fact we’re still not telling the truth about this is desperate. A decision was taken not to act.

‘After sustained pressure it was reluctantly reversed. It matters because three years later it’s still happening.’

‘I’m going to speak out on anti-Semitism for as long as it takes to root it out and deal with it.

‘There is an individual responsibility and collective responsibility on the shadow cabinet and National Executive Committee to speak out and deal with it.’

Pressed on whether Mr Corbyn’s handling of anti-Semitism made him ‘unfit’ to enter No 10, Mr Watson said: ‘He could easily be Prime Minister.

‘But, of course, we could do without the anti-Semitism because it allows you to ask me that question on the Today programme.

‘We need to close these issues down and we do it by being absolutely vigilant in the way we deal with racism in our own ranks. That’s on all of us.’

Last night, Mr Corbyn suspended Mr Williamson after a revolt by his MPs following hours of fury and frustration.

Labour had initially refused to withdraw the whip from the Derby North MP, even though he had said the party was ‘too apologetic’ about anti-Semitism.

Mr Corbyn is believed to have intervened personally to block his suspension.

One Labour MP Siobhain McDonagh accused the party leader of doing ‘all he could’ to defend Mr Williamson before bowing to pressure to suspend him.

She told HuffPostUK: ‘No amount of mealy-mouthed apologies could justify his actions at the Sheffield Momentum event last week. How could we apologise too much for acts of anti-Jewish racism in our party?

‘Jeremy did all he could to personally defend him but he could not maintain his support in the face of universal demands for his suspension.’

Some 38 moderate MPs then pressed for Mr Williamson’s removal, putting their demands in a letter. Mr Watson also intervened, condemning the decision to only ‘investigate’ the remarks.

Asked whether anyone from Mr Corbyn’s office had argued against suspension of Mr Williamson, Mr Watson told Today: ‘I can’t confirm that. I’ve no idea who said what in Jeremy’s office. I honestly don’t know that.’ 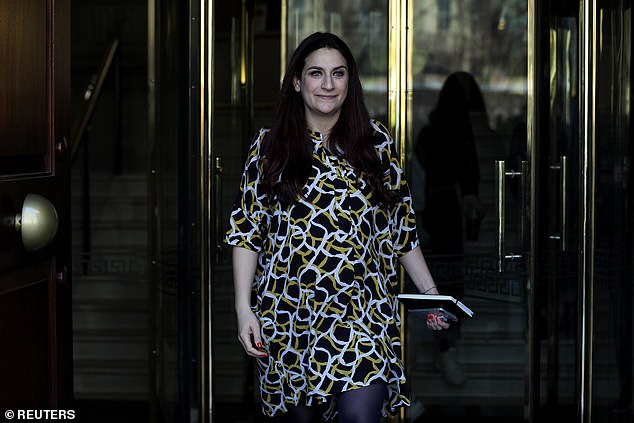 Labour’s deputy leader warned the bullying of Jewish MP Luciana Berger (pictured last week in Westminster) out of the party was the ‘worst day of shame’ in its 120 year history. 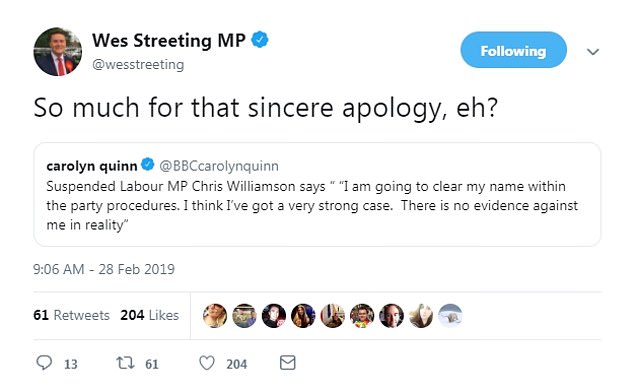 Some Labour MPs lashed out at comments by Chris Williamson following his suspension. Earlier on Wednesday he has apologised for saying the party had been ‘too apologetic’ about anti-Semitism

As the row developed into a full-scale crisis a hard-left group led by shadow chancellor John McDonnell claimed that most Labour members ‘would agree wholeheartedly’ with Mr Williamson’s comments.

The Labour Representation Committee, of which Mr McDonnell is president, ran a blogpost yesterday by Jay Blackwood, in which he said the evidence suggested that the MP was ‘a consistent, principled opponent of racism in all its forms’.

He went on to add: ‘The reality is that most Labour Party members – include this blogger – would wholeheartedly agree with Chris’s words.

‘I have not seen a single shred of evidence from his speech to justify the vile slurs now being thrown in his direction.

‘Condemning the party’s supine response to the campaign of vilification conducted by the Blairites, the Israel lobby and the mainstream media is not in any way anti-semitic.’

The posted ended with a subscript noting: ‘The LRC agrees with Jay 100%.’

The anti-Semitism scandal has dogged Labour since Jeremy Corbyn was elected leader  in 2015.

Here is a timeline of the controversies:

Labour MP Naz Shah is suspended for anti-Semitic posts – including one in which she appeared to endorse calls for Israelis to be deported to the US.

She apologised and was given a formal warning.

Ken Livingstone goes on the radio to defend Ms Shah – but sparks fresh controversy by claiming that Hitler supported Zionism.

He is suspended by Labour but refuses to apologise and has repeated the claim many times.

A two-month inquiry by civil liberties campaigner Shami Chakrabarti finds that Labour is not overrun by anti-Semitism.

But the launch is overshadowed when Jewish Labour MP Ruth Smeeth flees it in tears after being accused by Corbyn supporter Marc Wadsworth of colluding with the press.

Critics accuse the report of being a whitewash and Ms Chakrabarti is widely criticised for accepting a peerage from Jeremy Corbyn shortly afterwards.

The Home Affairs Select Committee says Labour is guilty of incompetence over its handling of anti-Semitism and of creating a safe space for people with ‘vile attitudes towards Jewish people’.

It is revealed that Jeremy Corbyn defended an artist who painted an anti-Semitic mural and said the offensive art should be removed.

He apologises saying he did not properly look at the picture before he made the post.

Marc Wadsworth is expelled from Labour after being accused of anti-Semitism.

Meanwhile, Labour Jewish MPs tell of the anti-Semitic abuse they have suffered in a powerful parliamentary debate – and round on their leader for failing to tackle it.

In an angry diatribe at a meeting of Labour’s ruling executive committee, he said he was ‘amazed’ there was evidence party members hated Jews.

He claimed ‘some of these people in the Jewish community support Trump – they are Trump fanatics’ before shouting: ‘So I am not going to be lectured to by Trump fanatics making up duff information without any evidence at all.’

Jeremy Corbyn issues a video insisting he is committed to tackling the racism – but it is panned by Jewish leaders.

Corbynistas mount a social media campaign to get deputy Labour leader Tom Watson to quit after he criticises the party’s handling of anti-Semitism.

The Daily Mail exclusively publishes photos of Jeremy Corbyn holding a wreath at a ceremony where a terrorist linked to the Munich massacre was honoured.

The Labour leader insists he was there to honour others killed – but faces fresh calls to quit over the scandal.

Nine MPs including Luciana Berger, Joan Ryan and Ian Austin are among those who quit the Labour Party with broadsides at inaction over anti-Semitism under Jeremy Corbyn’s leadership.

Berger, the Jewish Liverpool Wavertree MP, had faced a barrage of attacks from members of her own local party as well as wider abuse, said Labour had become ‘institutionally anti-Semitic’.

Enfield MP Joan Ryan was attacked because she was the chairwoman of Labour friends of Israel. And Dudley’s Ian Austen, who adoptive father was Jewish, said he had become ‘ashamed’ of what the party had become under Mr Corbyn’s leadership.

'Jane the Virgin' Really Needs to Dump Michael AND Rafael