Coronavirus deaths in Gwent ‘mirror those in Italy’ as a huge spike in numbers makes the Welsh region the UK’s worst hotspot after London.

Gwent in south Wales has 358 confirmed coronavirus cases, which constitutes more than half of the 628 infections in the country.

This means it has the highest concentration of confirmed Covid-19 cases per 100,000 people outside London, The Times reports. 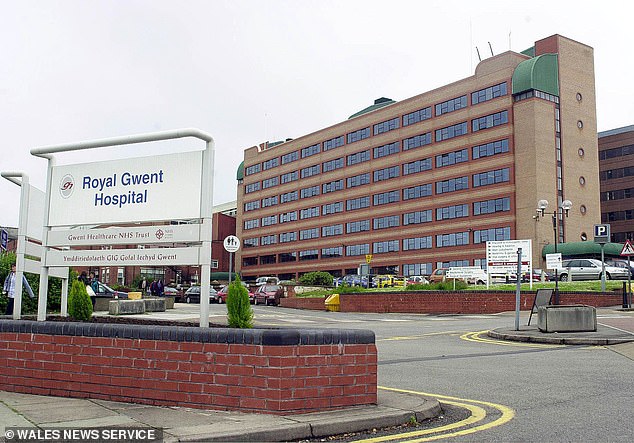 Gwent has become the second-biggest coronavirus hotspot in the UK, second only to London 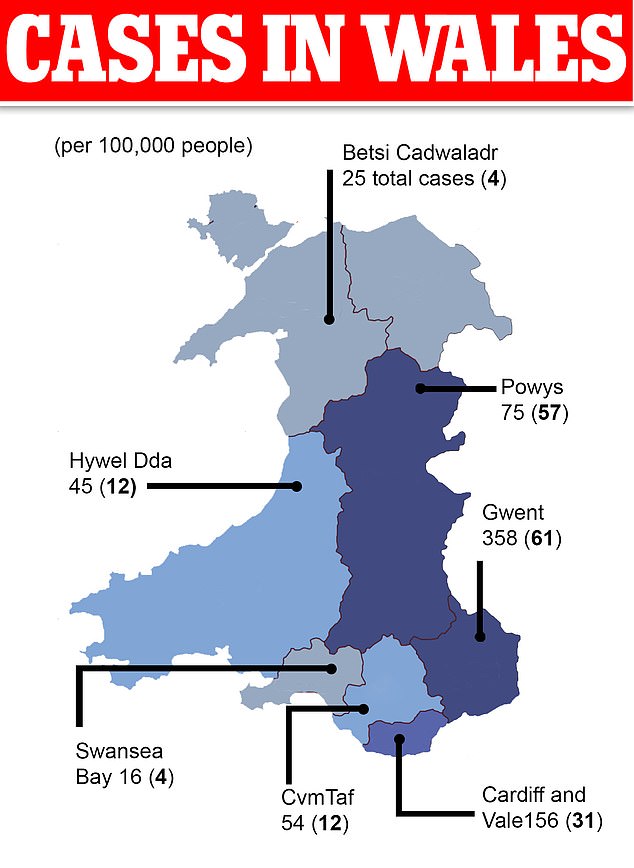 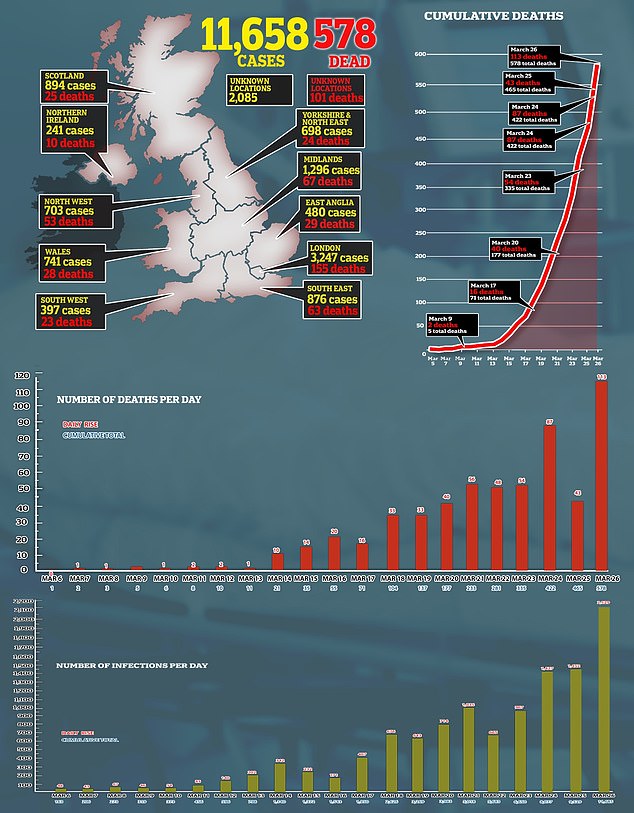 ‘The pattern we are seeing in Gwent is the same pattern seen in Italy where their healthcare system is now overwhelmed.

‘Without a huge effort by all of us we are heading to the moments where our health service will be overwhelmed too.’

Yesterday was Britain’s darkest day yet during the pandemic as the death toll jumped to 578 after 113 more fatalities were confirmed. There have now been 11,658 cases of Covid-19 in the UK.

But officials changed the timings of how they counted deaths, with yesterday’s total only taking into account an eight-hour period. Today’s shocking figure represents a full 24-hour count.

The daily death count is not only a count from overnight – the toll can include fatalities hospitals have only just processed, for example patients whose post-mortems have just come back.

Government scientists have admitted there is likely to be 1,000 infected patients for every death recorded in Britain – suggesting the true toll is in the region of 600,000.

WHAT DO WE KNOW ABOUT THE CORONAVIRUS?

What is the coronavirus?

A coronavirus is a type of virus which can cause illness in animals and people. Viruses break into cells inside their host and use them to reproduce itself and disrupt the body’s normal functions. Coronaviruses are named after the Latin word ‘corona’, which means crown, because they are encased by a spiked shell which resembles a royal crown.

The coronavirus from Wuhan is one which has never been seen before this outbreak. It has been named SARS-CoV-2 by the International Committee on Taxonomy of Viruses. The name stands for Severe Acute Respiratory Syndrome coronavirus 2.

Experts say the bug, which has killed around one in 50 patients since the outbreak began in December, is a ‘sister’ of the SARS illness which hit China in 2002, so has been named after it.

The disease that the virus causes has been named COVID-19, which stands for coronavirus disease 2019.

Dr Helena Maier, from the Pirbright Institute, said: ‘Coronaviruses are a family of viruses that infect a wide range of different species including humans, cattle, pigs, chickens, dogs, cats and wild animals.

By January 8, 59 suspected cases had been reported and seven people were in critical condition. Tests were developed for the new virus and recorded cases started to surge.

The first person died that week and, by January 16, two were dead and 41 cases were confirmed. The next day, scientists predicted that 1,700 people had become infected, possibly up to 7,000.

Where does the virus come from?

According to scientists, the virus almost certainly came from bats. Coronaviruses in general tend to originate in animals – the similar SARS and MERS viruses are believed to have originated in civet cats and camels, respectively.

The first cases of COVID-19 came from people visiting or working in a live animal market in Wuhan, which has since been closed down for investigation.

Although the market is officially a seafood market, other dead and living animals were being sold there, including wolf cubs, salamanders, snakes, peacocks, porcupines and camel meat.

A study by the Wuhan Institute of Virology, published in February 2020 in the scientific journal Nature, found that the genetic make-up virus samples found in patients in China is 96 per cent identical to a coronavirus they found in bats.

However, there were not many bats at the market so scientists say it was likely there was an animal which acted as a middle-man, contracting it from a bat before then transmitting it to a human. It has not yet been confirmed what type of animal this was.

Dr Michael Skinner, a virologist at Imperial College London, was not involved with the research but said: ‘The discovery definitely places the origin of nCoV in bats in China.

‘We still do not know whether another species served as an intermediate host to amplify the virus, and possibly even to bring it to the market, nor what species that host might have been.’

So far the fatalities are quite low. Why are health experts so worried about it?

Experts say the international community is concerned about the virus because so little is known about it and it appears to be spreading quickly.

It is similar to SARS, which infected 8,000 people and killed nearly 800 in an outbreak in Asia in 2003, in that it is a type of coronavirus which infects humans’ lungs. It is less deadly than SARS, however, which killed around one in 10 people, compared to approximately one in 50 for COVID-19.

Another reason for concern is that nobody has any immunity to the virus because they’ve never encountered it before. This means it may be able to cause more damage than viruses we come across often, like the flu or common cold.

Speaking at a briefing in January, Oxford University professor, Dr Peter Horby, said: ‘Novel viruses can spread much faster through the population than viruses which circulate all the time because we have no immunity to them.

‘Most seasonal flu viruses have a case fatality rate of less than one in 1,000 people. Here we’re talking about a virus where we don’t understand fully the severity spectrum but it’s possible the case fatality rate could be as high as two per cent.’

If the death rate is truly two per cent, that means two out of every 100 patients who get it will die.

‘My feeling is it’s lower,’ Dr Horby added. ‘We’re probably missing this iceberg of milder cases. But that’s the current circumstance we’re in.

‘Two per cent case fatality rate is comparable to the Spanish Flu pandemic in 1918 so it is a significant concern globally.’

How does the virus spread?

The illness can spread between people just through coughs and sneezes, making it an extremely contagious infection. And it may also spread even before someone has symptoms.

It is believed to travel in the saliva and even through water in the eyes, therefore close contact, kissing, and sharing cutlery or utensils are all risky. It can also live on surfaces, such as plastic and steel, for up to 72 hours, meaning people can catch it by touching contaminated surfaces.

Originally, people were thought to be catching it from a live animal market in Wuhan city. But cases soon began to emerge in people who had never been there, which forced medics to realise it was spreading from person to person.

What does the virus do to you? What are the symptoms?

Once someone has caught the COVID-19 virus it may take between two and 14 days, or even longer, for them to show any symptoms – but they may still be contagious during this time.

If and when they do become ill, typical signs include a runny nose, a cough, sore throat and a fever (high temperature). The vast majority of patients will recover from these without any issues, and many will need no medical help at all.

In a small group of patients, who seem mainly to be the elderly or those with long-term illnesses, it can lead to pneumonia. Pneumonia is an infection in which the insides of the lungs swell up and fill with fluid. It makes it increasingly difficult to breathe and, if left untreated, can be fatal and suffocate people.

Figures are showing that young children do not seem to be particularly badly affected by the virus, which they say is peculiar considering their susceptibility to flu, but it is not clear why.

What have genetic tests revealed about the virus?

Scientists in China have recorded the genetic sequences of around 19 strains of the virus and released them to experts working around the world.

This allows others to study them, develop tests and potentially look into treating the illness they cause.

Examinations have revealed the coronavirus did not change much – changing is known as mutating – much during the early stages of its spread.

However, the director-general of China’s Center for Disease Control and Prevention, Gao Fu, said the virus was mutating and adapting as it spread through people.

This means efforts to study the virus and to potentially control it may be made extra difficult because the virus might look different every time scientists analyse it.

More study may be able to reveal whether the virus first infected a small number of people then change and spread from them, or whether there were various versions of the virus coming from animals which have developed separately.

How dangerous is the virus?

The virus has a death rate of around two per cent. This is a similar death rate to the Spanish Flu outbreak which, in 1918, went on to kill around 50million people.

Experts have been conflicted since the beginning of the outbreak about whether the true number of people who are infected is significantly higher than the official numbers of recorded cases. Some people are expected to have such mild symptoms that they never even realise they are ill unless they’re tested, so only the more serious cases get discovered, making the death toll seem higher than it really is.

However, an investigation into government surveillance in China said it had found no reason to believe this was true.

Dr Bruce Aylward, a World Health Organization official who went on a mission to China, said there was no evidence that figures were only showing the tip of the iceberg, and said recording appeared to be accurate, Stat News reported.

Can the virus be cured?

The COVID-19 virus cannot be cured and it is proving difficult to contain.

Antibiotics do not work against viruses, so they are out of the question. Antiviral drugs can work, but the process of understanding a virus then developing and producing drugs to treat it would take years and huge amounts of money.

No vaccine exists for the coronavirus yet and it’s not likely one will be developed in time to be of any use in this outbreak, for similar reasons to the above.

The National Institutes of Health in the US, and Baylor University in Waco, Texas, say they are working on a vaccine based on what they know about coronaviruses in general, using information from the SARS outbreak. But this may take a year or more to develop, according to Pharmaceutical Technology.

Currently, governments and health authorities are working to contain the virus and to care for patients who are sick and stop them infecting other people.

People who catch the illness are being quarantined in hospitals, where their symptoms can be treated and they will be away from the uninfected public.

And airports around the world are putting in place screening measures such as having doctors on-site, taking people’s temperatures to check for fevers and using thermal screening to spot those who might be ill (infection causes a raised temperature).

However, it can take weeks for symptoms to appear, so there is only a small likelihood that patients will be spotted up in an airport.

Is this outbreak an epidemic or a pandemic?

The outbreak was declared a pandemic on March 11. A pandemic is defined by the World Health Organization as the ‘worldwide spread of a new disease’.

Previously, the UN agency said most cases outside of Hubei had been ‘spillover’ from the epicentre, so the disease wasn’t actually spreading actively around the world.

Clone your existing Android smartphone to the Huawei Mate 30

Kate Middleton Shares Heartfelt 'Thank You' to Teachers During Candid Video Call: 'You're a Lifeline'

Woman ‘rejected from cafe job because she isn’t English’