NSW health authorities last night named a number of new venues in western Sydney that were attended by a confirmed COVID-19 case.

The venues are in Auburn and Berala and anyone who attended them at the times listed is being asked to get tested immediately and self-isolate until they receive a negative result.

Anyone who has visited Auburn Central shopping centre or the Auburn shops along Queen St and South Terrace at any time since January 1, 2021 and is experiencing any COVID-19 symptoms is also being asked to get tested and self-isolate while they wait for the result.

NSW Premier Gladys Berejiklian and Treasurer Dominic Perrottet are urging other states to scrap domestic coronavirus travel restrictions after Victoria reopened to parts of Sydney and government figures reveal the borders stalemate is costing NSW close to $180 million per week.

As NSW recorded zero cases of community transmission on Monday, Victorian Premier Daniel Andrews announced the state would downgrade all but 10 of Sydney's 35 local government areas from 'red' to 'orange' risk. 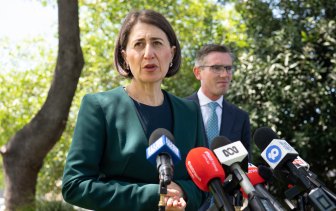 Ms Berejiklian said the move, which will allow Sydneysiders from orange LGAs to travel to Melbourne but isolate until receiving a negative coronavirus test, was a "step in the right direction".

However, she said there should be no domestic border restrictions given federal health authorities have declared there are no Commonwealth hotspots.

Mr Perrottet said while health concerns were a priority, "we also need to ensure livelihoods are protected as well". Government figures from Destination NSW show interstate visitors spent $9.5 billion in NSW in 2019, or close to $180 million per week.

Hello and thanks for joining us for our ongoing coverage of the coronavirus pandemic.

Here's a quick recap of where we're at as we start the day.