A bizarre Covid-19 warning video starring David Seaman has been openly mocked online after a council enlisted the former England goalkeeper’s help to encourage people to get tested.

The former Arsenal shot-stopper, once known for his signature moustache and ponytail, addressed locals in Bracknell Forest using his Cameo account – which charges users £117.90 per video.

The local council has said the cost of paying for the video was cheaper than other advertising methods, while they hoped Seaman’s star quality would help encourage men under 40 to get a Covid test.

Last October Seaman filmed a similar video for his hometown of Rotherham, during which he clutched a ball between his hands and urged viewers: ‘Don’t get caught offside.’

In a pun-laden video shared by the Bracknell Forest Council last Friday, Seaman told viewers: ‘Bracknell Forest chaps, if you’ve got Covid-19 symptoms, you need to get a test. 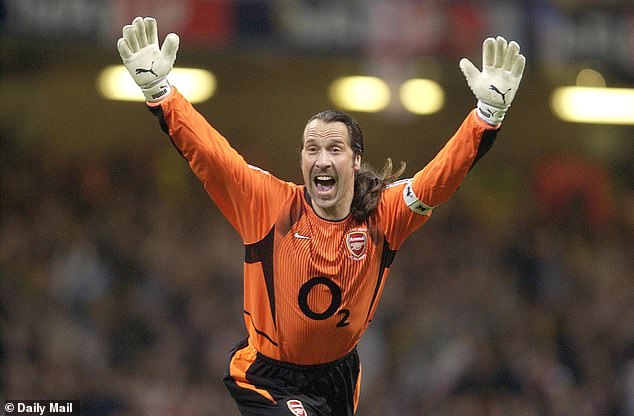 Published 17 years after his retirement, viewers were left baffled by David Seaman’s video, with one asking ‘Who is this?’ Seaman raised his hands to the camera after delivering a pun-laden message urging people to get a Covid test

‘You don’t need me to give you a pep talk, but now’s not the time to drop the ball, stay safe.’

Seaman, 57, who has no affiliation with the Berkshire town, then held up his hands to the camera.

One wondered what was next and joked they were going to hire fellow former Three Lion Michael Owen to talk about ‘food waste bins.’ 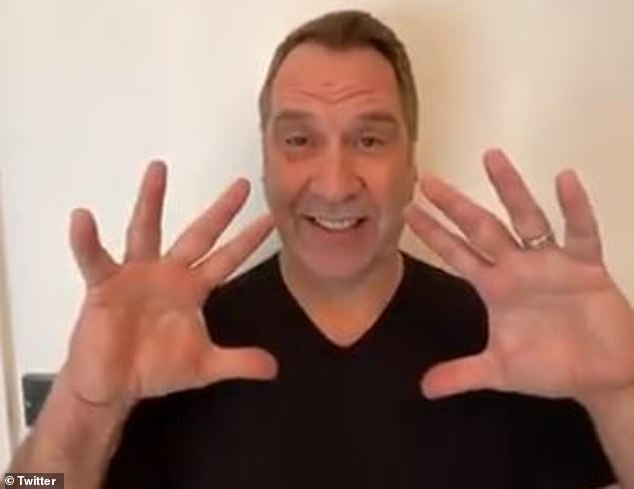 The former Arsenal and England goalkeeper is not thought to have any ties to Bracknell, but appeared in the video via his Cameo account, where he charges nearly £120 per film

Others in Bracknell said they had no idea who the 2006 Dancing on Ice star – dubbed Safe Hands – was.

Local Rob King joked: ‘Next up… a video from Michael Owen on the upcoming food waste bins.’

Lisa Jane added: ‘Oh dear,’ while puzzled Yasim Boulden asked: ‘Who is this?’

Yet Margaret Ericsson thought getting Seaman to deliver the message was a good idea.

She said: ‘Of-course, if you get tested you must isolate until results come through. However long the wait.’

Bracknell Forest Council posted the video on Facebook and Twitter, it’s not clear who wrote Seaman’s script for the baffling footage.

A Bracknell Forest Council spokeswoman said: ‘Recently, our data has suggested that males in the borough, specifically under 40s, have not been coming forward for testing and so we looked to use a well-known figure and positive role model that could deliver a message to target that audience.

‘David Seaman has been used by another council in a similar way and Bracknell Forest Council is not the first to use or pay for a well-known figure to deliver such messages.

‘The cost of the video was significantly cheaper than other forms of advertising – for example a local newspaper advert which would be at least double the price for half the reach.

‘This isn’t our usual line of marketing but given the severity of the ongoing pandemic, it’s only right we try as many avenues as possible.

‘If even one person now follows the rules, gets tested and stops the spread then the message is worth it.’

The council’s social media post read: ‘There should be no question about it, if you have COVID-19 symptoms, get tested.

‘Don’t just carry on, get tested if you have symptoms, it could save a life.’

Oldham Council leader Sean Fielding told BBC Breakfast last August corporate council communications channels ‘have not been as successful as we would like’.

‘We are being quite creative in terms of how we communicate those messages, we’ve enlisted support of the Pakistani cricket captain (Azhar Ali) who has recorded a video for us to get the message out to communities that might listen to him rather than listen to me,’ said Mr Fielding.

He added that corporate council communications channels ‘have not been as successful as we would like’.

‘We are being quite creative in terms of how we communicate those messages, we’ve enlisted support of the Pakistani cricket captain (Azhar Ali) who has recorded a video for us to get the message out to communities that might listen to him rather than listen to me,’ said Mr Fielding.

45 Things You Didn’t Know You Needed Off of Amazon

Fruit of the Loom, NFL Star Alvin Kamara Are Giving Away 1,000 Tees