An airport employee almost caused a major accident on the runway when he drove his van in front of an airplane as it was about to take off because he didn’t want to miss the company BBQ.

Terrifying video released earlier this week shows a plane at Springfield-Branson National Airport in Springfield, Missouri preparing for takeoff. As the plane, with 57 passengers onboard, gets ready to ascend an airport operations vehicle zooms in front of the aircraft, narrowly avoiding a collision.

‘That was very close,’ the driver of the van says in a call with the ground controller, asking for the number of the plane.

According to an incident report, the near miss happened on June 27, the same day as a company picnic.

The General Aviation department was not able to send people over to the BBQ until after 12 because of general aviation operations. The picnic ended at 1pm.

In the past, the department would send one person to the BBQ to pick up food and bring it back for the group but this year the general aviation manager was told that workers who wanted to attend should be sent over ‘and allowed to mingle with other airport employees’.

Around 12:50pm, a general aviation worker and two of his colleagues decided to go to the BBQ and took an operations vehicle.

‘I decided that due to the time limitations we would cross the runway in order to make it in time,’ the unnamed employee wrote.

He said he contacted the ground controller and asked if he was clear to cross runway 20. When he was given the go-ahead, he drove across. 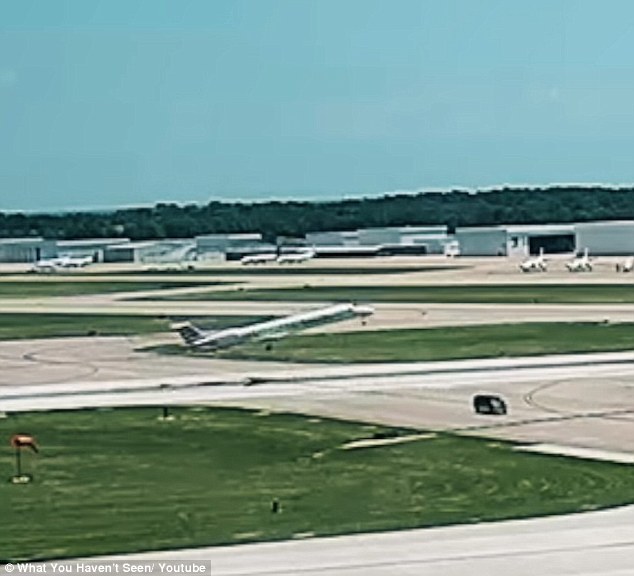 An airport operations vehicle was crossing several runways when it almost collided with a plane. The driver of the van said he had to speed up to avoid a crash 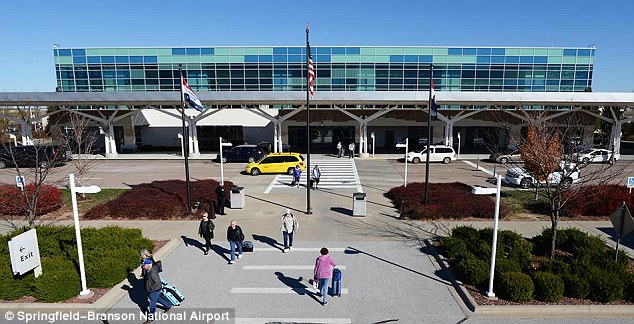 The incident happened at Springfield-Branson National Airport in Springfield, Missouri on June 27

‘I read the instructions back to the ground controller and proceeded to start across runway 20. Runway 20 had been the active runway for the day and before crossing 20 I looked both ways to make sure it was clear,’ he wrote.

‘Just as I had cleared runway 20 the Ground Controller cleared me to cross runway 14. I repeated back cleared to cross runway 14 and proceeded at a high rate of speed (to minimize time on the taxiway and runway) down the taxiway Uniform. It is generally my practice to look at both ends of any runway I cross, but I honestly cannot say for sure that I looked both ways or how far down the runway I might have looked.’

The employee said about halfway across runway 14 the right passenger alerted him to the approaching aircraft.

‘I looked out the right passenger window to see the landing lights on an E145 coming down the runway,’ he wrote in the report.

‘I accelerated across the runway and heard the aircraft overhead just as we were leaving the runway surface.’

The plane was reportedly carrying 57 passengers. There was no damage to the aircraft and no injuries reported.