A man accused of inciting others to protest against Victoria’s coronavirus restrictions could have his criminal charges dropped if his legal challenge against the state’s laws is successful in another court, his lawyer says.

Tony Pecora appeared before Melbourne Magistrates Court on Tuesday, charged with two counts of incitement. Police allege the 43-year-old encouraged others to attend a “walk for freedom” at the Royal Botanic Gardens in September last year, in contravention of stay-at-home laws. 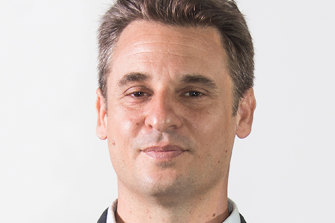 Tony Pecora is accused of inciting others to protest against Victoria’s coronavirus restrictions.

Mr Pecora’s lawyer, Madeleine Smith, had his criminal case adjourned for four months while they wait for a listing for a civil trial in the Supreme Court, where Mr Pecora and others have filed a writ challenging the legalities of Victoria’s coronavirus restrictions.

Ms Smith told magistrate Angela Bolger the outcome of the Supreme Court proceedings would likely affect Mr Pecora’s case in the Magistrates Court, and it was possible that his charges could be withdrawn by prosecutors if the higher court ruled in his favour.

However, Mr Pecora’s case in the Supreme Court is on hold as his lawyers wait on the High Court to publish its reasons behind finding against mining billionaire Clive Palmer, who last year lost a legal bid to have Western Australia’s border closures deemed unconstitutional.

Mr Pecora was once a political candidate for Mr Palmer’s United Australia Party until he was sacked in 2019 when he outed himself as a September 11 conspiracy theorist.

Ms Bolger adjourned Mr Pecora’s case on the incitement charge until June 3 but he is listed to appear before court on Wednesday on separate charges. He is on bail.

Mr Pecora is one of several people charged with incitement over allegations they encouraged others to attend protests against pandemic restrictions and lockdown measures last year.

Ballarat mother Zoe Buhler is charged with inciting others to attend a protest that was held in the regional city in September. She is due to appear before court later this month.

A man in his 40s, who was one of dozens of protesters arrested outside Melbourne’s Queen Victoria Market in September, is due to appear before Ringwood Magistrates Court next week. Police allege he was the leader of that protest.

After the arrest of a man in his 70s, accused of inciting others to attend an anti-lockdown protest, Victoria Police Assistant Commissioner Luke Cornelius last year said officers would not tolerate anti-coronavirus theories at organised protests.

“The tinfoil hat-wearing brigade are alive and well out there in our community and they are taking every opportunity to leverage the current situation to serve their own ridiculous notions about so-called sovereign citizens, about constitutional issues,” Mr Cornelius said at the time.

“People need to wake up to themselves because the wider community is awake to you and you need to stop it.”

Catch all the day’s headlines

At the end of each day, we’ll send you the most important breaking news headlines, evening entertainment ideas and a long read to enjoy.  Sign up here.