Crowds cheered loudly, car horns blared in the streets, and pots and pans clanged in New York and Washington after news broke that Joe Biden had won the presidency.

In Manhattan, applause and screams of celebration erupted, with crowds gathering in areas such as Times Square, strangers congratulating one another, some hugging, others jumping with delight. 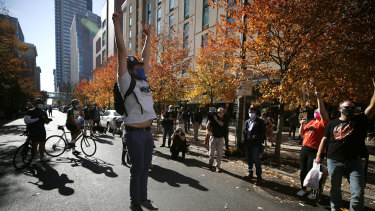 "It's so emotional and exciting," said Kerstin Pace as she left her apartment near Central Park to join in the party atmosphere.

"The scenes here are electric."

Minutes after major television networks declared Biden the winner following four nail-biting days since the November 3 election, people streamed to the White House to celebrate outside a security fence as the sound of booming fireworks was heard in the distance.

In nearby Dupont Circle, several hundred people formed a parade, playing music, singing and dancing and marched towards the White House to the sound of honking horns and clanging cowbells. 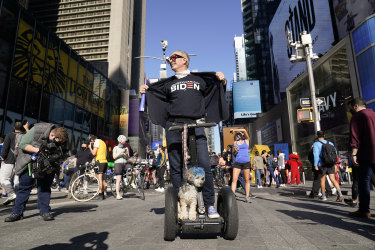 People celebrate in Times Square after former vice president and Democratic presidential candidate Joe Biden was announced as the winner.Credit:

Outside the Pennsylvania State Capitol, a man brandished a huge poster "Trump, you're fired", while nearby people punched their arms in the air. 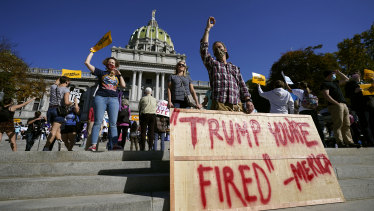 People are jubilant as they gather outside the Pennsylvania State Capitol.Credit:

Loud cheers erupted in the halls of the hotel where Biden aides are staying.

"Worth every minute," of the wait, a Biden aide said. Campaign staff exchanged elbow bumps and air hugs in the hotel lobby.

In the New York borough of Brooklyn, cars honked and people pumped their fist and cheered on the street.

"The nightmare is over," said Andrew Ravin, 45, while his neighbour Kenneth Henry, 51, said, "We can breath again." 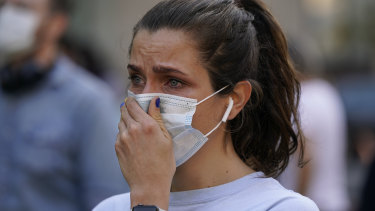 Olivia Cox is emotional as she learns that Biden has been declared the winner. Credit:

Emmi Braselton, 37, a freelance graphic designer of Atlanta, was walking her two-year-old daughter Sylvie, who asked "What's all that Mommy?," Braselton said.

"I told her, the good guy won. And also, now there'll be a woman as vice president. And she told me, 'I want to be president.'"

Biden had a 273 to 214 lead in the state-by-state Electoral College vote that determines the winner, having won Pennsylvania's 20 electoral votes to put him over the 270 he needed to secure the presidency, according to Edison Research.

To secure the win, Biden faced unprecedented challenges. These included Republican-led efforts to limit mail-in voting at a time when a record number of people were due to vote by mail because of the pandemic, which has killed more than 235,000 people in the United States.

When the former vice president enters the White House on January 20, the oldest person to assume the office at age 78, he likely will face a difficult task governing in a deeply polarised Washington, underscored by a record nationwide voter turnout in a fight to the finish.

Next James Bond: No Time To Die singer Billie Eilish backs THIS star – ‘He would KILL it’

Former tuberculosis hospital on the market for £10million

What was alleged Zodiac Killer Gary Francis Poste's cause of death?