DAN HODGES: Stamping out anti-Semitism? No… Labour’s sinking back into its racist swamp 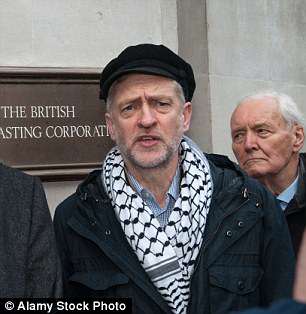 Two months ago, Labour MPs, their supporters and members of the Jewish community gathered in Parliament Square to protest against anti-Semitism in the Labour Party. Their voices were loud, the pledge passionate and clear. If they could not reclaim their party, they would at least reclaim its soul.

A ‘cesspit’ of anti-Semitism was engulfing Labour, they said. Its proud heritage as the leading, progressive, anti-racist force in British politics was being subsumed beneath a tidal wave of anti-Jewish hatred. The time had come to drain the swamp. ‘Enough is enough’ was the rallying cry.

But now the truth has finally emerged. Indeed, it has come slithering and belching out of the Labour cesspit, oozing red slime.

Far from being confronted, anti-Semitism is being entrenched. Jeremy Corbyn’s pledge ‘I will never be anything other than a militant opponent of anti-Semitism’ has been exposed and discredited.

And far from rededicating Labour to its historic, anti-racist mission, he and his spokesman are loudly defending the right of his party and its activists to be openly and brazenly anti-Semitic.

The official minutes taken by leaders of the Jewish community during their April meeting with Corbyn and his team have been obtained by The Mail on Sunday. And they are instructive.

There are the usual platitudes. The nostalgic reminiscences of anti-racism campaigns past. But then comes the key passage, and the moment when Seumas Milne, Corbyn’s senior apparatchik, explains why Labour’s leader is unable to sign up to an internationally recognised definition of anti-Semitism drawn up by the International Holocaust Remembrance Alliance (IHRA), an inter-governmental organisation supported by dozens of countries.

‘Milne said the problem lay with those [in Labour] who viewed the creation of Israel as a “catastrophe”,’ the minutes of the meeting explain, ‘he referenced “racism” and the “foundation of the state”.’ Then they cut to the chase. Milne ‘finally clarified that the problem lay with the clause [of the IHRA definition] that referenced “the creation of the state of Israel being a racist endeavour”.’

That clause is a key part of the IHRA definition that says it is anti-Semitic to claim the creation of Israel was a racist project.

A global description of anti-Semitism has been defined. It has been accepted by the British Government and 30 other nations. Yet Jeremy Corbyn and his advisers will not accept it. Given the choice between siding with the Jewish community, or those the IHRA has identified as anti-Semites, they have elected to stand shoulder to shoulder with the anti-Semites.

Someone Corbyn will not be standing shoulder to shoulder with any longer is Ken Livingstone. But again, that is not because he was moved to act against Livingstone for his persistent taunting of Britain’s Jews with the spectre of Adolf Hitler. Instead, he allowed him to ride off into the political sunset, stepping down from Labour’s ranks with a warm tribute, and his thanks.

Another Corbyn ally who received a tribute last week was Margaret Osamor. Described – inevitably – by Corbyn’s office as a ‘veteran anti-racist campaigner’, Osamor was nominated for a peerage for her ‘commendable service’ to the Labour movement.

There was a brief, shining moment two months ago when it looked like we had genuinely reached a turning point. That a red line was finally being drawn that all Labour MPs and members of good conscience would stand astride.

But we now have to face reality. That moment in Parliament Square was actually a bright, shining lie.

Those Labour moderates who said ‘enough is enough’ weren’t being honest. Either with the Jewish community, or with themselves.

Yes, they had been prepared to bear witness to the racist flood consuming their party. And for that they deserved, and still deserve, praise. But they did not say they would simply take on the role of observers.

They pledged they would force action from their leader. Decisive action. There has been no action from Jeremy Corbyn against the scourge of Labour anti-Semitism.

Actually, that’s not true. There have been a series of actions, all of which have increased the insecurity and anger of Britain’s Jews.

There was Corbyn’s decision to break bread with Jewdas, one of the few Jewish groups to condemn the Parliament Square demonstration. And then there was the revelation Corbyn’s aides had planned a ‘victory parade’ through the streets of Barnet if Labour had seized control of the council in the local elections.

Just picture that scene for a moment. Corbyn, flanked by the zealots of Momentum, marching through one of London’s most populous Jewish boroughs, toasting their electoral success.

That the parade didn’t happen was not down to the actions of Labour’s moderates.

Throughout the local election campaign, their insistence ‘enough is enough’, and that Corbyn must clamp down on anti-Semitism, were quietly shelved.

Anti-Semitism was still a problem, we were all told. But we had to look beyond it and see the big picture. Like who we wanted to be responsible for emptying our bins.

Fortunately, the voters of Barnet were not prepared to look at the ‘big picture’. There was only one picture they were focused on. It was that giant Nazi-style mural of hook-nosed Jews getting rich off the backs of the workers of the world that the leader of the Labour Party had defended.

‘A lazy culture of crony capitalism is alive and flourishing,’ Cortes roared, after it was revealed Haines is also a non-executive director of a private rolling stock company.

But a mole informs me that had Cortes checked his union’s records, he would have seen that for 22 years Haines was a loyally paid-up member of – you guessed it – the TSSA.

‘Talk about burning bridges with the new boss of thousands of your members before he has even started,’ moans my source.

This morning, Labour’s moderate activists and MPs need to focus on something else – themselves.

And they need to answer a few simple questions.

Maybe the answer is ‘no’. Which is understandable. As the polls continue to drift, the campaign of abuse and intimidation levelled at those who dare stand against Jeremy Corbyn’s cultist army is intensifying. And self-preservation is the most basic of human instincts.

But Labour’s moderates owe it to the Jewish community to be honest with them. To all of us.

These are the most popular Halloween costumes in every state